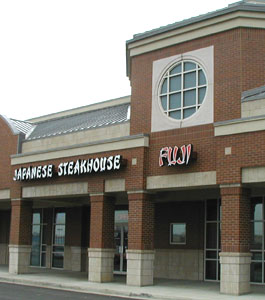 *** Fuji Japanese Steakhouse
3576 Springhurst Boulevard
(502) 339-1978
Never mind the old jokes about sushi as "bait." If you have made the conceptual leap ("122,626,038 Japanese can't be wrong") to eating raw fish with actual enjoyment, then you'll understand - as I do - that sushi is not merely a healthy and enjoyable treat but a feast for the eyes as well as the nose and palate, something like an astounding jewel box that you can eat.

And when it comes to the Japanese hibachi-grill and steakhouse genre, which seems to be filling up the city's eastern stretches with a new outlet of one chain or another in just about every suburban shopping center, I'd rank the sushi bar as the one feature that makes these otherwise near-identical franchises worth a visit.

So as soon as I spotted the new Fuji Japanese Steakhouse in the mushrooming Springhurst "power center" near Tinseltown, I dropped by in search of good sushi. (For more about sushi, check our Quick Sushi Primer below.)

Fuji is in a shopping strip so new that you still have to bump over unfinished gravel to get into the parking lot. Inside the redbrick storefront you'll find the standard Japanese steakhouse setup: A separate section of the room is set off by a maplewood divider to house the hibachi tables where groups of eight watch Japanese actor/chef's slicing, dicing and setting things on fire. The sushi bar on the right seats about a dozen along an L-shaped bar; and "four-top" tables fill the rest of the room its in, where guests can sit and order sushi a la carte or dinner items from the menu, which offers assorted appetizers and about a dozen standard teriyaki, tempura and rice or noodle bowl dishes from $8.50 to $19.95.

We headed straight for the sushi bar, though, and saw that it was good. Simply furnished in the traditional japanese style, it's an alcove of shiny, blond maplewood draped with dark-blue and white banners loaded with Japanese kanji characters, and uniformed sushi chefs ready with sharp knives and sushi tools behind clear-glass cases holding a fishmonger's delight of fresh fish, shellfish and vegetables.

The chef (who spoke very good English) immediately handed us small china plates with complimentary sunomono, a fresh and crisp salad-like treat of cucumber and finely shredded carrot, onion and seaweed bits in a salty, tangy sweet-sour dressing. We also summoned hot green tea and miso soup, and found it up to standard: Hot, salty and filling, with bits of tofu and vegetable.

Part of the fun of sitting at the sushi bar is that you get to watch the chef at work. Put in your order (marking choices on the menu or simply pointing to what you want on colorful cards or actually pointing at the items in the glass case), then sit back, sip your tea (or beer or sake) while the artist creates delights like a daily special, fried calamari roll ($5). He gently places a strip of shiny, slightly vinegary steamed sushi rice along a sheet of black-green nori seaweed; lays on a generous portion of calamari, crisply batter-fried tempura style (this one's not a raw item), then adds cucumber strips, a dab of red salmon roe and a squirt of hot sauce before rolling the works into a cylinder in a straw mat, pressing firmly to push it all into shape. A few quick cleaver whacks and the roll is sliced into six tasty, bite-size rounds, which he briskly but gently spreads out on our maple sushi plate. "Hai!" ("Yes!") he barks, and I try to play the part with a quick head-bow and soft "domo" ("thanks").

The crunchy tempura batter added an unexpected texture and flavor twist to this dish, playing nicely off the crisp cucumber, chewy squid and gently vinegared sushi rice, and the hot sauce was just enough to add a zippy note. It was so good we couldn't resist another.

We chose a few other favorites, which came in courses, some served on a maple board, others on a pretty turquoise dish.

Good sushi isn't cheap, and when you're seated at the bar, having a blast, and the chef smiles and nods whenever you point to another goodie, the price can mount up fast. What started as a light lunch turned into a bigger one, the tab for two eventually mounting to $33.81 plus a $6 tip to cover both the sushi chef and the server who cheerfully brought us soup, ice water and green tea. $$$