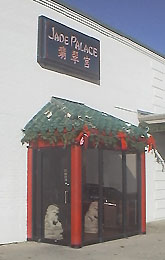 Forget your eggs Benedict, pancakes, French toast and bacon: When I've got a hankering for brunch, I choose Chinese.

Chinese brunch - called "dim sum" from the Cantonese for "touch the heart" - is about as far removed as it's possible to get from the American variety, but it's a delight in its own right, featuring dozens of bite-size snacks in a bewildering array of hot, cold, savory and sweet. Many items are steamed; others deep-fried, and a few come in exotic presentations, rolled in glistening Chinese wheat pasta or wrapped in a dark, sturdy lotus leaf.

In larger cities, restaurants in "Chinatown" neighborhoods specialize in dim sum, where the boisterous weekend scene features servers rushing around the room with wheeled carts filled to the brim with dim sum dishes. Diners point to the items they want, and at the end of the meal, the bill is tallied from the number of plates they used.

Jade Palace is the place for dim sum in Kentucky. Although cart service isn't economically feasible, a colorful photo menu makes a practical substitute. Select from pictures of nearly four dozen dim sum treats, which you can order by number or by pointing to the photos of the items you like. (GOOD NEWS: Early in 2004, management instituted limited cart service for Saturday and Sunday dim sum. You may still order from the menu, but popular items are now wheeled around for the point-and-eat treatment.)

Jade Palace also offers more familiar Chinese dishes, including an all-you-can-eat lunch buffet on weekdays, but to be quite frank, it doesn't rate more than two stars for its everyday fare. But it's the dim sum that draws us here, and in this role, Jade Palace is first-rate.

Here's a quick guide to some of our dim sum favorites:

Sui Mai ($2), pork and shrimp dumplings, four to an order, ground stuffing wrapped in won-ton wrappers pulled up around them in tulip shapes, steamed in a bamboo basket.

Lo Bak Go ($2), turnip cakes, three to a plate. Despite turnip's down-home nature, this one is a little exotic - earthy aromas and flavors, pungent and tart, shredded and served in a gelatinous rectangle that tastes a lot better than it looks. The very similar Woo Tou Kou ($2), Taro cake, is similar and even more earthy.

Woo Kwok ($2), fried taro, three to a plate. Deep-fried crisp and brown, these football-shaped root-vegetable fritters bear a remarkable resemblance to rolled oysters ... without the oysters.

Chuen Kuen ($2), more familiarly known as spring roll, two to a plate. Veggies, pork and shrimp deep-fried in a won-ton (pasta) cylinder. I rarely order them with dim sum, as they're a little TOO familiar, but Jade Palace's rendition is a good one, crunchy and filling.

Stuffed To Fo ($2), two largish and rather chewy "boats" of fried bean curd (tofu), each bearing a cargo that's apparently identical to the beef balls above.

Char Sui Bao ($2), two to a serving and representative of an entire genre: Soft white bread rolls, steamed, not baked, wrapped around a hidden treasure - in this case, tender and sweet chinese barbecued pork.

Jau Bao ($2), a pair of buns with saucy curried pork in the middle, covered with sesame seeds and fried golden brown - the most seductive pork sandwich I've ever tasted.

Nor Mai Gai ($3.50), one of my favorite dim sum, is a pillow of sweet-sticky glutinous rice wrapped around a melange of shrimp, pork and chicken and steamed inside an oversize lotus leaf that adds its own delicate flavor to the dish. Cut open the leaf at the table (it's too tough to eat) and pull out the delectable ingredients with chopsticks or your fork.

If you're looking for something more substantial, the dim sum menu offers large bowls of Chinese noodles: Char Sui Mein ($3.50) features a generous ration of barbecued pork in broth with wheat noodles; Yee Don Mai ($3.95) is a similar dish with fish balls (ground fish dumplings). Pork and beef rice-noodle stir-fries are also available. Koun Chou Ngau Nor ($6.95) was a large oval dish of stir-fried beef and soft, freshly made wheat noodles in a light, rather oily sauce.

Dim sum makes a surprisingly affordable and filling meal. No matter how hard I try, throwing caution to the winds for the sake of dim sum gluttony, I have never been able to push a lunch for two past the $20 mark. Two recent visits topped out at $15.90 and $18.10. $$