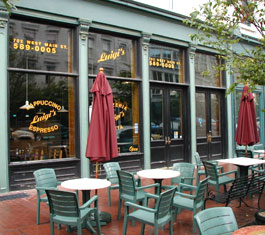 *** Luigi's
702 W. Main St.
(502) 589-0005
If you think one pizza is pretty much like another, you may not have sampled New York City-style pizza, a treat that you'll find on just about every street corner in The Big Apple, but that - until now - has been thin on the ground in the Derby City.

What's the difference? The NYC brand of pie is generally available by the slice, spread out for your inspection on a countertop behind glass. Point out the one with the toppings you want, and the gent behind the counter pops it back in the real pizza oven until its hot and melty, then puts it on a paper plate - each slice gets a plate of its own - and hands it over. You can use the plate as a holder, if you wish; fold the slice over lengthwise, and eat it from the point back to the crust.

In New York, it seems that 95 percent of the corner pizzerias all claim kinship with a historic spot named Ray's. "The Original Ray's," "The REAL Original Ray's," "Ray's Grandmama's" - it's a rare entrepreneur who doesn't choose some variation on the name Ray when he hangs out his sign.

Now you can enjoy genuine New York-style pizza in downtown Louisville, from a place that's not named Ray's but Luigi's. You godda problem wid dat? I sure don't!

Like the city around it, Luigi's shuts down tight when the sidewalks are rolled up at 5 p.m. on weekdays (plus Saturday lunch from 11 to 3). But if you work downtown and crave an Italian dinner, you can call ahead for a carry-out order, and they'll have it waiting when you head for home.

It's a long, high room in a historic Main Street storefront, with undraped tables and sturdy chairs along the left side of the room, with framed pictures of Italian scenes on the high walls. A long counter fills the other side, with pizza and pasta on display. There's a soft-drink dispenser at the back, and an Italian-American guy vending pizza behind the counter.

The pizza is just like the New York kind, paper-thin and cracker-crisp, beautifully browned around the edge, topped with a light coat of tangy, herbal tomato sauce and a molten layer of bubbly, creamy and properly stringy mozzarell'. The plain cheese slice is the classic tradition, and Luigi's is fine, although a "loaded" slice was mighty good, too, topped with a mound of green and black olives, garlic and onions, green pepper and a few pepperoni rounds on a sturdy base of melted cheese toasted golden brown.

Two slices and a big glass of diet cola come to a reasonable $7.15, plus a buck for the tip jar. $