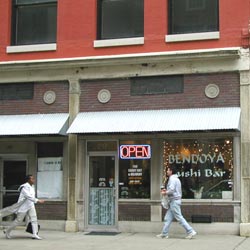 Open only during business hours (11 a.m.-4 p.m. Monday-Friday), Bendoya is already doing a fine business, despite the reality that quality sushi is neither quick nor inexpensive fare. Count on spending at least an hour to dine here, and don't expect to get out for less than $10 a head, possibly quite a bit more if you have a serious sushi "jones."

Bendoya looks like a typical downtown hole-in-the-wall eatery given a Japanese accent (actually, I believe the management is Korean) with a shoji screen and bamboo curtain or two and a couple of Japanese-style paintings. There's room for about eight red-woodgrain tables with bentwood chairs, and a 10-seat sushi bar, of course; with pale-gray tile flooring and rather imposing Art Deco light fixtures overhead and a few congratulatory plants in the front window.

The tables are set with colorful plastic placemats picturing sushi selections and a Sapporo Beer commercial. Come to think of it, I don't think I've ever seen a sushi chart that didn't advertise one brand or another of Japanese brew.

The sushi menu, typical of the genre, resembles a golf scorecard and even comes with a pencil; tick off the items you want from a list of about 40 choices and hand it to the server. (If you're new to the lore and language of sushi, check our Quick Sushi Primer in another recent report.

There was no room at the sushi bar, so we took a table and ordered a few items from the menu as well as a selection of sushi.

Udon (wheat noodle soup, $4.95) came in a large, pretty blue bowl, but it was not an exceptionally large serving. Fat white udon noodles swim in a thin, fishy broth with tidbits of mushroom, sliced zucchini and a slice or two of a brownish-gold item that appears to be a reconstituted and fried dried-fish product. It was tasty enough, but my wife found the strong dried-fish aroma offputting, even though she's a fish-lover.

Miso soup ($1) and house salad ($1.25) were straightforward Japanese-restaurant stuff: Thick, creamy miso (soybean) soup was salty and "meaty," with a few bits of tofu and scallion. The salad offered crisp chunks of iceberg lettuce and a shred or two of carrot in the standard tart-sweet orange-ginger salad dressing.

I ordered a variety of sushi selections, both maki (rolled sushi) and nigiri (fish on rice balls), and found them generally competent, although there were signs that the sushi chefs were working fast under pressure. It took an irritatingly long time, more than a half-hour, for our first sushi items to appear, hustled out by servers on blond wood trays. Several items also appeared to have been made hurriedly, with neatly cut rectangles of fish perched loosely on rice balls rather than having been formed and pressed into shape. The fish was admirably fresh, though, consistently sweet and clean in aroma and flavor with none of the "fishy" smells that suggest too-old product.

Octopus sushi (Tako in Japanese, $3 for a pair) was nothing to fear, a pretty snow-white bite of seafood with dark-purple edges, chewy in a pleasant way and mild in flavor. Yellowtail (Hamachi, $3.40 for two) and red snapper (Tai, $3.25 for two) were both tender and delicately flavored. Tuna roll (Maguro, $California roll ($4.50 for six rounds) was typical of the genre - it's a good "starter" sushi for people worried about raw fish, as it contains such non-threatening items as avocado, cucumber and a bit of ersatz "crab shape" that comes pre-cooked, all rolled in crisp seaweed and sushi rice.

Then I tucked into an Ebi ($3, cooked shrimp on rice ball) and a Sake ($3.25, raw salmon, savory and gentle), at which point I suddenly realized that I hadn't asked for salmon or shrimp. In fact, there was a lot of sushi on our trays that we hadn't ordered, and things got more confusing still when a server arrived more unrequested octopus and a couple of other unexpected treats. What's more, some of the dishes I had ordered didn't turn up - fried-shrimp roll ($5.95) and scallop sushi ($3).

Hey! They brought us someone else's food, and impatient from the long wait, we had pitched in without noticing. Amid great bustle and a lot of Korean-Japanese chatter, they whisked away some of our dishes and gave them to another table, then hustled back with the missing shrimp rolls, which turned out to be California roll with a bit of crunchy fried shrimp added. The scallops never did show up, but then, we ate a lot that wasn't coming to us, so I guess fair is fair.

The meter clicks over rapidly at sushi bars, but even so, I was startled at the end of the meal to find that we had racked up a bill for $44.84; and Bendoya's rather casual bookkeeping system makes it difficult to go into extended analysis with the manager, whose command of English is excellent but seemed to fade when I asked him to itemize the charges. I suspect that he charged us for the unrequested extras, but under the circumstances it didn't seem worth fighting over. Still, with a $6.16 tip to thank the fellows behind the sushi bar, it made for an unusually pricey lunch. $$$