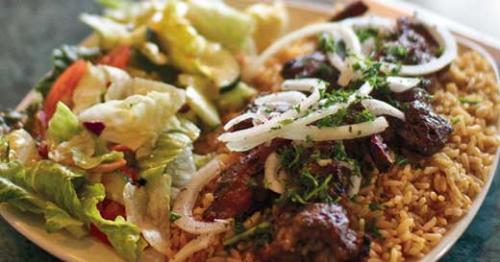 Even amid our town’s evolution toward ethnic diversity over the past generation, the stretch of Bardstown Road in Buechel stands out. Within a few steps of Six Mile Lane, you’ll find an Asian market run by a Korean family, a European market run by a Russian family and a string of Bosnian businesses, including a restaurant-market and a bakery.

Recently joining the mix is Petra Mediterranean, a family-run spot that offers the cuisines of the eastern Mediterranean and southwest Asia, with accents from the proprietors’ homeland, Jordan.

For a quick geographical refresher, Jordan is an Arab kingdom on the east bank of the Jordan River, bordering Israel. One of its major tourist attractions is Petra, the ancient city carved from rose-colored rock some two millennia ago that serves as the restaurant’s namesake and inspiration.

Petra is located in smallish quarters that, in recent memory, housed Ternanga African, a pleasant west African eatery run by a Senegalese family, and Momma Leah’s, a soul-food diner.

Petra divides the space into two separate rooms, the well-sealed chamber on the left housing a hookah lounge where the familiar Middle Eastern water-smoking experience is available for $7.99 a session, in your choice of a dozen fruit scents ranging from strawberry or blueberry to guava, minty lemon or the inscrutably named “Petra Special Mix.”

But there’s no hint of hookah in the bright, sparkling-clean restaurant section, where food is served — and an appealing selection of food it is. It’s primarily pan-Arabic cuisine plus the familiar gyros ($5.99 for a combo plate) and, for the wary, hamburgers ($6.95 with fries), a roast beef sandwich ($6.49) and even a Philly cheese steak ($6.95). Perhaps in salute to Petra’s international neighbors, there’s also a Bosnian kebab ($7.95), made no doubt with the Balkan ground beef treat.

We came for the Middle Eastern fare, though, and had plenty of choices on the slick, three-fold menu. The bill of fare is divided among “Lunch,” which is also available in the evening; “Combos,” which includes the American fare and some Middle Eastern dishes; and “From Petra,” which appear to be Jordanian versions of mostly familiar Arab fare.

Everything’s priced for the thrifty palate, with only a couple of lamb dishes exceeding $10. The lunch-at-all-hours selections come with salad and rice and range in price from $7.95 for a Bosnian kebab or grilled chicken breast to $11.95 for rack of lamb.

The Combos section offers a dozen choices, from a nominal $4.99 for a falafel sandwich with fries and drink to a still affordable $7.95 for a shawerma combo, featuring spit-roasted, sliced meat or poultry in pita, plus fries and a drink.

If ordering “From Petra,” you’ll pay from $1.49 for a half-dozen crunchy fried falafels to $6.95 for a plate of rich hummus topped with your choice of beef or chicken. A $3.95 toll will bring you an order of eggplant-based baba ganoush, chickpea mossabaha, hummus or the unfortunately named fool, sometimes rendered “foul,” which is a savory and spicy fava bean dish.

There’s also a selection of salads and an unusual drinks list (non-alcoholic) that goes beyond fountain drinks to Arabian coffee ($1.25), fruit slushies ($1.99), natural carrot juice ($2.49) and something called a “natural cocktail” ($3.49) that incorporates chopped fruit, honey and almonds with whipped cream.

It’s an interesting menu, diverse enough to satisfy just about everyone, with plenty of unusual ethnic dishes to tantalize the foodie. One caution: Petra is a small shop with, apparently, two guys running the counter, table service and kitchen. They were out of several dishes I really wanted to try, including the aforementioned Bosnian kebab and, alas, the kibbeh maqliah (4.95), the deep-fried, football-shaped Middle Eastern lamb-and-bulghur meatball I crave whenever I see it.

The lamb kebab ($10.95) was a big winner, consisting of big chunks of flavorful, still slightly rare lamb, smoky and gently charred on the grill, topped with finely chopped parsley atop a bed of gently flavored, cinnamon-scented rice. I wanted to take some home and eventually did, but it wasn’t easy, because it was so good that I kept going back for one more bite.

Mary loves tabouli ($3.49) and chowed right down on what she said was a well-made, standard version, perhaps a bit tilted toward parsley in the greens-vs.-bulgur balance.

The hummus-with-beef plate ($6.95) was pretty much as described: A plate-size circle of thick hummus was smooth and sweet, perhaps not as strongly garlicky as some, but it made a great foil for excellent beef — probably shaved from the shawerma roast — dusted with tangy, smoky purple sumac and topped with thick shreds of raw sweet onion and chopped parsley.

A filling dinner for two, with a soft drink and plenty of leftovers to take home, didn’t reach far past $30 even with a 20-percent-plus tip.