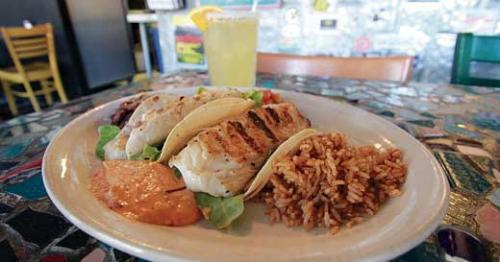 You’ll find a lot of different kinds of Mexican eateries around town. “Mexican” dining experiences run the gamut from tacquerias so authentic that you’ll need to bring a Spanish-English dictionary (or at least a smile and a plan to point out what you want) to, well, Taco Bell, which barely qualifies as Mexican at all.

The Metro is chock-a-block with Anglo-friendly real-Mexican places like Los Aztecas, El Tarasco and El Nopal; sit-down chain dining in a Tex-Mex style (Chuy’s), and fast-casual American eats with a light Mexican accent. We’ve got burrito shacks (Lolita’s, La Bamba), and so it goes. If you want Mexican, you can have it real or have it faux — or anywhere in between.

But one local Mexican favorite can best be described by the Latin (not Spanish) term sui generis, meaning “one of a kind,” in a good way.

El Mundo was one of the early arrivals in the Frankfort Avenue restaurant renaissance. It settled in to its tight quarters about 18 years ago, around the same time the Irish Rover popped up a block or two away, so both have been around long enough to become neighborhood landmarks.

I drive by frequently but don’t stop in as often as I would like — this is the downside of a job that gets me out to try new restaurants all the time. It occurred to me the other day, though, that there’ve been multiple staff and chef changes since my last visit, which gave me a perfectly good excuse to drop in for dinner.

What’s changed? Not much, really. The grub is still great, and the place is still noisy as a boiler factory. A very cozy boiler factory, that is, where friendly people gather nightly to enjoy good company, excellent libations and splendid Mexican food.

Depending on your pleasure, you may enjoy several tiny but distinctive venues in El Mundo’s small space: The original dining room — the first-floor storefront — contains about five tile-topped tables sharing space with the service counter and kitchen. Out front, two or three sidewalk tables are available for low-budget boulevardiers. In the back, a vest-pocket al fresco dining room fits snugly into a small space between the building and the railroad tracks. But upstairs, at the top of a sturdy metal staircase, is the epicenter of the action: about three small rooms of closely packed tables and one popular bar.

The bar menu, indeed, occupies two full pages of El Mundo’s laminated menu book, with about three dozen fine tequilas (from $4.50 to $20 per shot), plus tequila flights, blue agave tequilas and margaritas. It’s a big draw, but youthful experience with tequila has left me fearful, so I skimmed the brief but well-chosen wine selection before settling on craft beers ($4) to accompany our Mexican repast.

My love for El Mundo comes from the food, though. As much as anything, it reminds me of Rick Bayless’ iconic Frontera Grill in Chicago, with dishes that pay respect to Mexican regional authenticity but that are prepared and plated in a modern bistro style. Some 20 entrées, plus changing daily specials, range from $7.95 (for the Q Plate with beans, rice, salad greens, guacamole, salsa fresca and tortillas or chips) to $13.95 (for fish tacos or a combo plate with samples of three entrées). In most dishes you may choose chicken, pork, bison, roasted veggies or black beans.

You don’t get free chips and salsa at El Mundo. Get over it. The tradeoff, and it’s a good one, is the opportunity to choose from among a variety of salsitas and other starters. We went green, so to speak, with a bowl of thick tomatillo salsa ($3.75) that had an endorphin-producing spicy warmth that crept up on us, along with a good-size bowl of impeccably fresh crisp tortilla chips.

The soup of the day ($3.25) was gazpacho, a slightly spicy, rough purée of tomatoes and vegetables served cold, loaded with remarkably crunchy croutons and topped with a sprig of fresh cilantro.

The fish tacos ($13.25) were presented Sonora-style, open-face on crisp field lettuces inside light corn tortillas. But don’t expect the usual crunchy fried McFishnuggets. These tacos bore an entrée-size ration of fresh grilled chunks of sweet Icelandic cod, with a spicy chipotle aioli on the side.

The corn and bean tamales ($9.50) tasted as pretty as they looked: masa harina dough loaded with sweet yellow corn niblets and a rich and warming mole sauce, wrapped into fat cylinders inside corn husks, painted with a thick coat of dark-brown mole striped like zebras with white crema.

Both mains were plated with idiosyncratic but flavorful sides: The Mexican rice was tan, not red, infused with aromatic cumin and chili powder. The beans were no lardy mash but well-cooked pintos in a thick, hearty dark-brown sauce. Molded rounds of spicy, fresh-tomato salsa fresca tied up the package with a bow.

Dinner for two, with a couple of beers, came to a reasonable $47.46, and service that remained polite and on-the-spot despite the slammed environment earned a $10 tip.