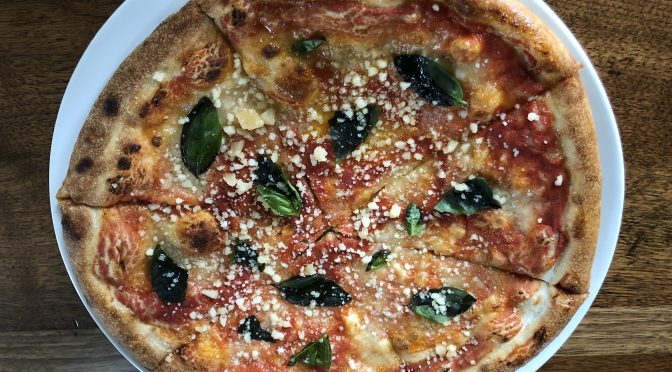 I hate moving. I can’t imagine that anybody would really like the sorting, culling, boxing, shifting, trucking and heavy lifting that comes with a move. Now imagine moving during a pandemic, with masks and serious social distancing in a play, and you’ll have some idea what it must have been like for bar Vetti last month.

bar Vetti, a casually stylish Italian-theme restaurant, opened in a corner of the main floor of the turquoise landmark 800 building in October 2017. It drew instant acclaim, and almost immediately became a victim of its own success: With only room for 50 diners in its tiny room, with a short bar filling a fair chunk of that, it had little room for the hungry crowds that came rushing in, and no place to grow.

So executive chef and partner Andrew McCabe’s announcement seemed almost inevitable when he revealed last January that bar Vetti was heading for a new space in the AC Hotel by Marriott Louisville Downtown in NuLu. The move not only nearly doubles the restaurant’s space from 1,700 to 3,300 square feet, but also moves it from an attractive but slightly off-the-beaten-path location south of Broadway to one of the city’s hottest dining and entertainment zones.

The arrival of the pandemic a couple of months later couldn’t have helped. Nevertheless, bar Vetti persisted, hitting its late-spring target with a the new quarters. It stayed open at the 800 Building until June 2, then closed briefly for a quick physical move, opening in NuLu for carryout and curbside service on June 10.

I love bar Vetti and couldn’t wait to try it again. I certainly didn’t expect its casual regional Italian style to change, but one excuse is as good as another, right? It’s open only for curbside pickup right now (Wednesdays through Saturdays from 4-9 p.m.). That suits me while this pandemic continues, so I quickly found my way to its online ordering page. (I may have been one of the last to get this service, as  bar Vetti has briefly suspended carryout and online ordering while it prepares to open the dining room with a new menu. Watch for online ordering to return with an expanded bill of fare next week.)

The online menu is simple and easy to use, and it still features many of bar Vetti’s familiar dishes from its bill of fare in the old quarters: a variety of Italian dishes with plenty of pasta and pizza. It’s likely to change a bit as they settle in to the new place, but I don’t expect a major shift.

At the top of the page you click boxes to let them know how many sets of disposable utensils you wish, if any, and, in a creative twist, describe your car so they can easily find you at the curb.

Then click your way through the details, which include brief descriptions and icon-size photos of about 20 dishes, starting with a tall glass of cold brew iced coffee ($3) and moving on through a half-dozen soups, salads, and breadsticks to three sandwiches, four pasta entrees, seven pizzas, and, for dessert, cinnamon sticks ($7).

Some of the highlights include a smashed meatball burger ($13) featuring a pair of Indiana 3D Valley Farm beef meatballs on a potato bun with red sauce, mozzarella, parmesan, and pickled peppers. In a convenient touch, once you have chosen an item from the menu, you’re offered a variety of ways to tweak the dish: No cheese, no pickled peppers, extra pickled peppers (50 cents), extra meatball ($3), and extra cheese. Worried about allergies to wheat, nuts, shellfish or dairy? Check the blocks and they’ve got you covered.

3D Valley Farm beef also goes into a hearty bucatini pasta dish with beef ragù, topping the menu price range at $22. Twelve-inch pizzas range in price from $9 (for a kid’s pizza with only red sauce and cheese) to $14 (for four-cheese, Jake’s country sausage, or fancy pepperoni pies). Watch for specials … if you moved quickly you could have claimed a summer treat, a fresh Georgia peach and country ham pizza with whipped mascarpone.

The online system offered us a 2 p.m. Saturday pickup time. We rolled up at 1:47, parked out front, called in, and our food came out right on top of the hour. I would have liked it if our server had worn a mask, but then I guess we couldn’t have enjoyed her friendly smile as she dropped our pizza box and brown bag on the back seat.

We raced home, tore open the bag – kudos for neat packaging that kept everything in good shape – and got the dishes plated and ready to eat within 20 minutes of picking it up. That wasn’t fast enough to keep everything hot, but on a sizzling summer afternoon that wasn’t a big deal.

Beets and ricotta ($9) pictured above, made an exceptional starter. Cool cubes of red beet, cooked just to tenderness, had been soaked in a zippy citrus marinade, dusted with crushed pistachios, and kicked up with mint leaves and several grinds of good black pepper. Creamy house-made buttermilk ricotta and fruity green olive oil, packed separately, turned it into a luxurious delight.

Cacio e Pepe ($15), a classic Roman pasta dish , was made very well. A generous portion, enough for leftovers, was built on short, fat rigatoni pasta cooked perfectly al dente. The pasta was coated with a rich, creamy sauce of earthy Pecorino cheese melted with tangy buttermilk whey, then dusted with coarse grains of good black pepper that bursts on the palate with floral, bright, sharp and spicy flavor blasts that play in concert with the cheese.

Like cacio e pepe, the traditional Neapolitan Margherita pizza ($12), pictured at the top of this page, is a simple dish that requires care to make it perfect. bar Vetti’s rendition hits the mark, with a thin but chewy crust showing good wheat flavor that reminds me of Italian artisanal bread. Like the original, named after Italy’s late 19th century queen, it bears the red, white, and green colors of the Italian flag with light, subtle, but appealing tomato sauce under a thin blanket of melted mozzarella and grated Parmesan, scattered with small leaves of fresh basil.