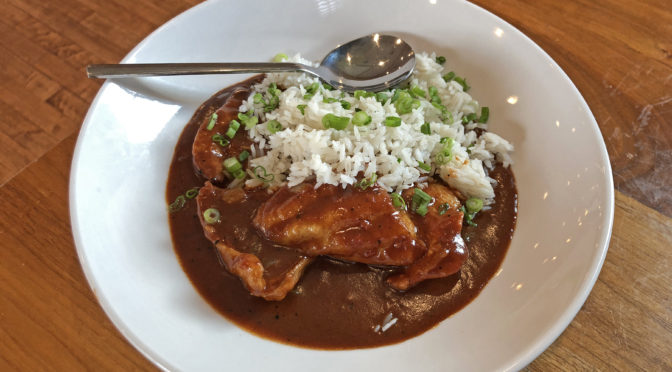 I really like Couvillion. I like the Cajun-country catfish dish, and I like the new Germantown restaurant. I can hardly wait to tell you about this. But first: What the hell is a Couvillion, and how do you even say it?

Okay, then. Couvillion (“coo-vee-ohn”) is a delicious Cajun fish stew made with a rich, thick roux, usually built on catfish and served with rice. It’s a Cajun variation on the French court-bouillon (“koor-boo-yawn“), which is a thin fish sauce that’s arguably more refined but probably not as tasty or filling.

Couvillion the restaurant, pronounced just the same way, occupies the stylish art-deco building just off Goss Avenue that previously housed Finn’s Southern Kitchen. Owner and Chef Paul Skulas came over from Portage House to open the new spot. And couvillion is a signature dish on the Couvillion menu.

But we’re getting ahead of ourselves. Let’s back up and take a look at the charming building, originally the office for the adjacent 1880s-era Louisville Cotton Mill buildings, long a popular antique mall now reborn as the Germantown Mill Lofts condos.

A short but thoughtful drinks selection that makes up for brevity with interesting selections. I couldn’t resist a Roots’n’Boots cocktail ($8), a savory mix of dark rum with cane syrup and a shot of root beer, its rich flavors nicely heightened by a couple of chunks of star anise marinating in the drink. Mary, intrigued by the presence of Ale-8-One ($2.25) on the menu, ordered her first can ever and gave thumbs-up to its sweet ginger-ale flavor.

The menu picks up the Southern theme that’s been all too prevalent in this not-so-Southern burg in recent years, but to its credit, it focuses not on the Confederate South but the Cajun and Creole flavors of New Orleans and Acadiana, Cajun country. In addition to the couvillion, nine other main dishes range in price from $6 (for a meatless red beans and rice, in homage to New Orleans’ Monday washday tradition) to $19 (for braised Hensley Homegrown Farms brisket). A roasted, Cajun-brined half of a chicken is $18, and a 1/3-pound onion smashburger featuring local beef is $9.

About a dozen appetizers and salads are $5 (for house-made pickles or white bean soup) to $12 (for a chopped salad topped with smoked salmon). Vegetarians are well served with meat-free options ranging from the red beans and rice and a beet-based version of the burger to a fascinating beet-based “meat” loaf ($15).

The so-called simple salad ($6) wasn’t too simple, but it was amazing. A huge bowl of fresh arugula, bitter as it should be but on the mild side, was tossed with a generous ration of candied pecans and tossed with just enough subtly minty herbal vinaigrette to coat the leaves lightly without drowning them. White bean soup was loaded with two kinds of ham – Penn’s city ham and Exum’s double-smoked country ham – so abundantly that it could have been billed as ham soup. The ham and beans swam in a rich, creamy bean broth topped with chopped white onions. Gumbo z’herbes, the classic Cajun “green” gumbo ($7), is a savory, spicy mix of things I don’t usually like – kale, mustard greens and collards – blended into a rough dark-roux puree with things I do like – okra, the Creole “holy trinity” of onions, green peppers and celery, Cajun spice and roux – to make a gumbo so good that, as Couvillion’s slogan says, “it could make a rabbit smack a bear.” Josh’s beet loaf ($15) was an offbeat but delightful variation on a classic meat loaf. A thick, reddish-brown slab of veggie goodness was fashioned from shredded beets, nuts, cheddar and cornmeal. It was plated on a mound of golden, creamy grits and topped with green beans long-simmered in an umami-loaded tomato-based sauce.

The namesake catfish couvillion ($16), pictured above, featured sizable, boneless filets of line-caught Lake Barkley Kentucky catfish, mild but not at all muddy. It was expertly poached, just done but not overcooked, slathered in a rich, dark, smooth couvillion. A dollop of rice was dropped into the sauce and topped with green onions.

We finished with a wedge of delicious apple-butter pie ($6), a smooth apple-and-brown-sugar filling in a crunchy cookie crust.

A hearty dinner for two, with a cocktail and a soft drink, totaled $69, plus a $17 tip for our courteous server, Duffy.

Noise level: Conversation is easy until a louder blues ballad comes over the sound system. We didn’t mind that. (Average sound level 71-76 dB, with bounces to 84.)

Accessibility: The historic building’s main entrance is barred to wheelchair users and others with limited mobility by a series of steps. Access is possible via an unmarked side entrance.