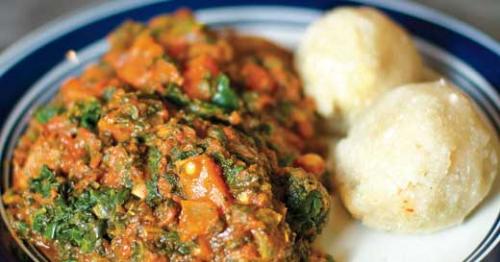 MOVED. Funmi’s closed at this location, but re-opened in August 2012 in a new location farther out Bardstown Road. Watch for a new review soon!

Think of Nigeria, and you’re likely to visualize a state on the edge of failure, part of the harsh legacy of colonialism. Though it is a modern country, its boundaries were drawn by Westerners who carved up the world for commercial exploitation, dividing traditional tribal regions without thought or concern.

It is a state endowed with oil, offering potential riches and massive corruption to a few and poverty and disease for the rest — not a pretty sight, although to Nigeria’s credit, it has opened the 21st century under its first lasting civilian government, and with a sense of optimism for the future.

But that’s not the real Nigeria. To visualize the country’s richer heritage, one must look to the Yoruba, the dominant people of its West African region. For several centuries beginning in the 1100s, when Europe was in the Dark Ages, fighting plagues, wars and ignorance, the Yoruba enjoyed a golden age of political domination, rich culture and art, creating works still sought after by museums.

The Yoruba also evolved an impressive cuisine — colorful, spicy and flavorful, taking advantage of the lush tropical region’s bounty of meat, seafood, vegetables and fruit. Adding tomatoes, rice and other ingredients brought by traders and, later, conquerors, Nigerian food brings the colors and flavors of West Africa to your dinner plate.

And now you can enjoy it in Louisville with the recent arrival of Funmi’s Café in the Highlands. Funmi’s (it’s pronounced “Foon-mee’s”) takes its name from the owner and cook, a friendly Nigerian woman who’s proud of her Yoruba heritage. She told us she has lived in Louisville for seven years but only recently became “bold enough” to open the restaurant she had always wanted to have.

My only question is, why did she wait so long? Everything we’ve tried from the short but interesting and authentic menu has been delicious, and its arrival, joining Chez Seneba (Senegal) and Queen of Sheba (Ethiopia), adds one more option to the city’s tiny niche of African eateries. It’s a worthy addition to the eclectic Bardstown strip.

In a small, freestanding building on Bardstown Road, Funmi’s is only a few doors south of Jack Fry’s but satisfies an entirely different craving. It’s also right next door to Homemade Ice Cream & Pie Kitchen, suggesting the possibility of a progressive meal — following your Nigerian repast with a cooling scoop of vanilla to soothe the burn from the Scotch bonnet (habanero) peppers that infuse just about all of Funmi’s dishes.

The room is a bit larger than it appears from the outside, extending back through two levels of a bright, neat and rather sparse venue with walls the colors of butternut squash and pumpkin. Undraped blue-gray tables, black dinette chairs, simple flatware wrapped in paper napkins and a few African-themed paintings complete the decor.

The menu, as mentioned, is relatively brief, but it offers a good introduction to Nigerian cuisine, and the friendly and competent server — and Funmi herself — are eager to answer questions.

Bring a little patience: Funmi does much of the cooking to your specific order. It takes a little more time than microwaving prepared portions, but the proof is in the tasting. Everything we tried was excellent, spicy but not burn-your-mouth fiery, infused with subtle, surprising flavors. When she starts working on your dinner, the room will fill with elusive, delicious aromas that don’t smell quite like anything in your spice rack.

We enjoyed a shared order of a remarkable black pepper soup ($9.99), a clear, well-made broth that unites the unexpected aromas of fragrant black pepper and fresh-cut mint. It’s a warming potion with fish or, our choice, flavorful stew beef. Most main dishes come with your choice of goat, fish, beef or chicken, or the non-traditional meatless options of tofu or mushrooms.

We chose our Nigerian-style Jollof rice ($12.99) with chicken, and were rewarded with two scoops of reddish-tinged, tender rice that looked like Mexican rice but carried an African accent, imparted by Nigerian spices and a jolt of Scotch bonnet pepper. They were accompanied with a savory mix of tender boneless chicken bites fricasseed with onions and tomatoes and a little more habanero heat.

Eba eforiro ($14.99) was perhaps the most fiery dish of the evening, a combination of Mary’s meat option, goat (tastes like lamb!), stewed with spicy collard greens and tomato sauce, with a couple of starchy balls of steamed cassava on the side.

Dinner at Funmi’s is not quite as cheap as KFC across the street, but it’s a heck of a lot better: We left stuffed, with plenty of leftover eba eforirio for lunch the next day, for a reasonable toll of $40.25 plus a $10 tip.