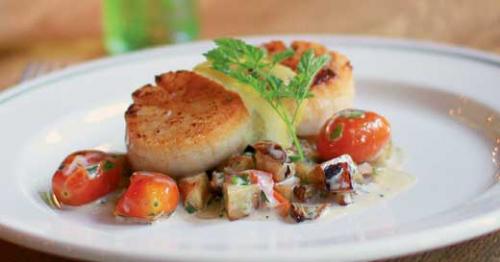 So what is a bistro? It’s hard to define simply in English, but let’s call it the Parisian model of a friendly, family-owned neighborhood restaurant that offers a simple bill of fare and tasty libations at wallet-friendly prices, with no pomp or circumstance.

The word bistro — often rendered as “bistrot” in France — is said to derive from the 1814 occupation of Paris by Russian soldiers after Napoleon’s loss at Waterloo, an event that gave us, among other things, Tchaikovsky’s “1812 Overture” and maybe the bistro, too.

The impatient soldiers would hammer on the table with their fists, yelling “??????!” (“Bystra!”), which means, more or less, “Move your butt!” in Russian. Eager to please, or at least to get the rude Russkies out of there, Parisian restaurateurs responded with a quick-service concept based on a simple menu and drinks list aimed at rapid service in an informal setting.

Believe me, there’ll be no need for pounding the table and bellowing at La Coop Bistro à Vins, newly arrived in the former home of 732 Social in the Green Building. Gossip-hounds will recall that the wildly popular 732 went down in an ugly divorce between its owners Steven and Michael Ton and their partner and chef Jayson Lewellyn. The Ton brothers, who also own Doc Crow’s and Basa Modern Vietnamese, are now joined by their partner at Crow’s, wine-geek extraordinaire Brett Davis, and by attorney-advisor Chip Hamm, to bring us La Coop.

A real winner in my book, La Coop captures a lot of authentic bistro spirit in a nicely redone venue that makes me, for one, feel very much as if I’m dining in Paris, except that the servers are a hell of a lot easier to understand.

We found the mood, the food from former Oakroom chef Bobby Benjamin’s kitchen, and the service all outstanding during a recent evening meal. Decor changes in the smallish (49-seat) space have added a Parisian vibe. Whimsical bird cages over hanging lamps plus chicken wire on the back bar provide a quirky underscore to “La Coop,” while the comfortable L-shaped bar still wraps around one side and the back of the room to afford views of the open kitchen.

You can pick up a quick French lesson from the menus, “Dejeuner” for lunch and “Dîner” for the evening meal; take care to avoid confusion when you encounter “Entrées” in its proper French use as “entries” or “appetizers.” The main dishes are “Plats,” merci beaucoup. Those starterish Entrées, Fruits de Mer (seafood) and Charcuterie (sausages and such), are priced from $5 (for the Salade Maison, er, house salad) to $13 (for Crabe au Four). “Plats” prices run from $12 (for aubergine farcie — stuffed eggplant, the only vegetarian option) to $20 (for that classic bistro dish, steak frites, steak ’n’ fries).

The lunch menu is similar, a bit shorter, and adds a few sandwiches — not least les cheeseburgers petits for $9 — and le petite Dejeuner, breakfast, with five options at $7 and $8.

La Coop has picked up the baton from 732 Social as an epicenter for cocktails, wines and spirits, this time with a French accent, with a drinks list intelligently curated by Brett Davis, a certified master sommelier. We started with a round of Kirs Pétillants (sparkling wine cocktails touched with splashes of ginger, pear and blackcurrant liqueurs, $8), then set up our dinner with a bottle of Chateau La Roque Pic Saint Loup ($44), a peppery Languedoc Syrah-Grenache red.

All the Plats were right on, without a flaw. Steak frites ($20) was simple and fine, a medium-pink hanger steak smothered with excellent fries, creamy Bernaise on the side. Coquilles St.-Jacques ($18) looked like a small portion but proved ample, two oversized seared scallops perched on a seductive fennel-and-celeriac ragout. Aubergine farcie ($12) was a veggie delight, a roasted eggplant shell filled with diced veggies, baked and topped with a blanket of earthy Gruyère.

Desserts wrapped it up in fine style: a rich chocolate tart ($6) with a glass of sweet Mas Amiel Maury dessert wine from the Pyrenees on the side; a cobbler-style apple tart ($6) and an earthy, ripe slice of St.-Nectaire cheese ($5).

Dinner for three, including the cocktails and wines, came to $173.84 plus a 20 percent tip; the share for two would have been about $115 plus tip.