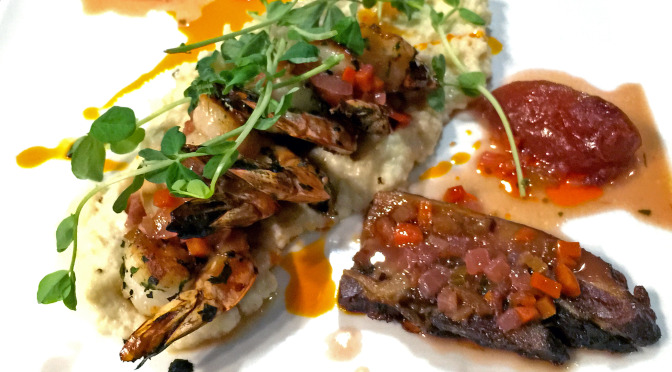 First, let’s get one thing perfectly clear: No matter how much I think I might dislike a place, I bring an open mind to the dinner table.

Sometimes this isn’t easy. Even if a restaurateur has responded to a review with veiled death threats or even mere front-yard TPing, it’s the critic’s job to swallow that bile and return someday, prepared to deal out judgment that’s honest and fair.

It’s a good thing, too, because I had a load of baggage in tow — much of it not particularly fair, but hey — when our friends Kathy and Rick joined Mary and me for a recent dinner at Mesh.

For instance, it may be a stretch to call an Indianapolis eatery’s first out-of-town clone a “chain.” Still, Mesh’s parent organization, Indy’s Cunningham Group, runs a half-dozen chain operations. When I see a corporate eatery, I imagine bean counters at headquarters overruling the creative people in the kitchen.

Then there’s the historic preservation thing. I’ve been around long enough to remember the original Bauer’s (since 1870!), then La Paloma and eventually Azalea. I loved that nostalgic old white house and its shaded, brick-walled patio, and hated to see it go.

But when the neglected old house decayed after Azalea closed in 2007, it was razed last year, and an odd, hulking block rose in its place. It looked … different. Then everything stalled. Rumors flew! Anoosh Shariat was coming back as chef! Oops, no he’s not! They’re wooing some other top guy! Or maybe not? Time dragged, a year passed.

Finally it opened in March, to acclaim that ranged from “Awesome” to “Me(s)h.” The menu was pricey, with most wines $50 per bottle and up. Apps run up to $15. Main dishes start in the upper teens and top out at $35.

Yep, I was all set for disappointment. But duty called, so I carefully removed the chip from my shoulder. We navigated the over-full parking lot, walked in, and … whoa! What’s this? It’s sleek! It’s glitzy! Stone and wood and glass! A brick patio with shade trees and a classy bar, just like Bauer’s!

My eyes popped. Might this place be good? Indeed, it met and exceeded expectations.

No, it’s not perfect. The menu is good but could be more imaginative, and meatless options are limited, although these may be decisions well-tuned to an older, upscale demographic. Chef Tim McIntosh’s dishes are easy on the eye, though; well fashioned and beautifully plated. Our server, Jennifer, said she was new, but you couldn’t tell it from her competent, pleasant and attentive service.

Still, it is loud. IT IS VERY LOUD, even by modern standards. “It was terrible,” Rick said. “My ears rang for three days.” I don’t think he was kidding.

But then we chilled out with adult beverages, the food started coming, and even if we couldn’t talk about it very well, we sure did enjoy it.

A Blue Dog starter, a treat that many restaurants offer free, is $5 here, but it has value added: Thick-sliced seeded cereal bread was grilled hot and crisp, then served with balsamic-laced olive oil and herbed butter.

Mushroom and goat cheese strudel ($10) was very good indeed, so good that I would consider a double order as a light meatless entree. Sautéed mushrooms were rolled in crisp, multi-layered paper-thin strudel dough, beautifully plated with almonds, soubise creamed kale and carrot vinaigrette.

Shrimp and Weisenberger Mill grits ($28), did the trick with oversize grilled shrimp and smoked pork belly plus a pretty pea-shoot garnish, although the menu might disclose that the grits are kicked up with hot-spicy flavor.

Bucatini all-Amatriciana ($18), a rustic pasta dish from Italy’s central mountains, introduced long, thick pasta to a robust tomato sauce scented with prosciutto and basil and topped with a dab of creamy ricotta. You can get it with chicken for an extra $4 or shrimp for $6 more.

A Viking Farm lamb shank ($30) was delicious, dense and rich with Indiana farm-raised flavor, long-braised and falling off the bone. It perched on a tomato sauce with some white beans and tiny squares of firm, very hot chorizo sausage and a chunk of pork belly.

Orange-brown sugar cheesecake ($7) was light, fluffy and flavorful salted caramel pot de creme ($7) was sweet, creamy and perceptibly salty, with spiced sugar cookies on the side.

Dinner for four came to $180. Split plus a 20 percent tip you’re looking at the century mark for two. It was worth it.