Last week in this space we celebrated Carnival, wrapping up the season of winter revelry with a gumbo party, tasty libations and all manner of Mardi Gras beads.

Today it’s Ash Wednesday, the music has stopped, and the repentant Lenten season is here. Even in this secular era when only the most devout observe Lent with fasting and abstinence, one religious ritual remains mighty easy to follow: fish sandwiches on rye!

To hail the season, we checked out four local spots known for fish sandwiches: the fast-food Moby Dick, historic Cunningham’s, the friendly Fish House and, for an upscale touch, Uptown Café. 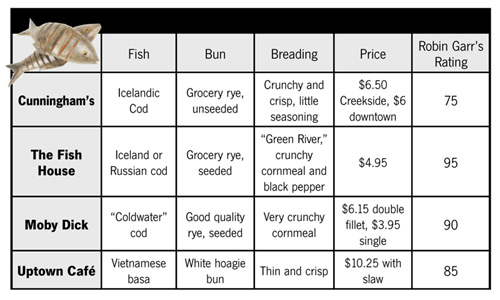 The tubby white whale with the funky frown has been a familiar Louisville logo since 1967. If the local chain’s image is a bit downscale, fish lovers ought to get over it: Moby stocks quality cod, and its cooks know their frying.

We checked out three locations, in Butchertown (1500 Mellwood Ave.), St. Matthews (4848 Shelbyville Road) and Middletown (12012 Shelbyville Road), and enjoyed excellent fish sandwiches every time. “A whale of a sandwich” (two pieces) is $6.15, while a “first mate” (one piece) is a paltry $3.95. Large or small, you get a generous portion of pure white and appetizingly flaky cod on very good seeded rye, fried so competently that you can pick it up and eat it with your fingers without getting those fingers greasy.

Onion rings were thin-sliced, crisp and sweet, but side orders of clam chowder ($2.39) were disappointing, a pale brew that seemed as if it had been thickened with cornstarch, not cream. This gives rise to a simple suggestion: Stick with fried things at Moby D’s.
We put down $18.41 for two whales, fried okra and Cokes at Butchertown; $17.68 for two mates and chowder at Middletown; and $13.16 at St. Matthews.

The fish sandwich here ($4.95), the proprietor said, is made with cod from Russia or Iceland (“Never, ever from China”), and cooked in the Green River Kentucky-style with crunchy cornmeal breading laced with plenty of black pepper. Simple grocery-store rye bread was studded with caraway seeds, worth an extra point or two in my book.

A haddock special, served the same day, was made with a more traditional bound breading, lighter in texture and golden in color. It was good, too, but the Green River standard is currently my pick as best fish sandwich in town. The rich and creamy seafood chowder, so thick you could stand your spoon up in it, was top-tier, too.

In a recent straw poll on the LouisvilleHotBytes.com forum, a number of people declared Cunningham’s fish sandwich the best in town. To check it out, I headed for the historic Louisville eatery’s new “Creekside” location in Harrods Creek (formerly Bus Parson’s River Creek Inn), where I summoned a fish sandwich on rye ($6.50).

Served unadorned on standard, unseeded, grocery-store rye, it was a good-size piece of fish (Icelandic cod, a downtown server later said), estimably grease-free but so thin that it had overcooked in the fryer. The breading was crisp but bland, lacking in seasoning. Tartar sauce was difficult to distinguish from store-bought mayo.

This didn’t seem right – maybe Cunningham’s on Fourth Street does it better? Willing to give it another shot, I headed downtown for lunch.

The fish sandwich here was half a buck less, but it bore a close family resemblance to the Creekside rendition. The fillet was a little thicker, snow-white cod in a crunchy and grease-free breading on generic unseeded rye. Again the package was disappointing, competently prepared but a bit overcooked, tough and short on flavor, and served just warm, not sizzling. Out-of-the-bag rippled potato chips were crisp and fresh, and a couple of pickle spears were excellent.

Downtown, lunch for one with iced tea and a cup of chili was just $11.88 plus a $3.34 tip. Dinner at Creekside with a fish platter, an equally disappointing fried oyster appetizer, a Coke and a bottle of BBC Altbier came to $23.33 and a $5 tip.

Uptown Café, with its friendly, casually upscale neighborhood feel and excellent fare, is consistently one of my Bardstown Road favorites.

A fine piece of fresh, white basa was on the thin side but large enough to dwarf the white hoagie bun that bore it. The fish was cloaked in a thin, crisp cornmeal breading fried grease-free, served open-face and dressed like a burger with leaf lettuce, sliced red onion, wan winter tomato and pickle slices. Slaw was creamy and fresh, no mere afterthought but a generous portion that deserved shared billing with the fish.

As part of a meal that also included tomato-spinach soup, a delicious grilled asparagus salad, crisp-fried smoked shrimp cakes and a couple of pints of Sierra Nevada Pale Ale, a first-rate dinner was $47.12 plus a $10 tip.