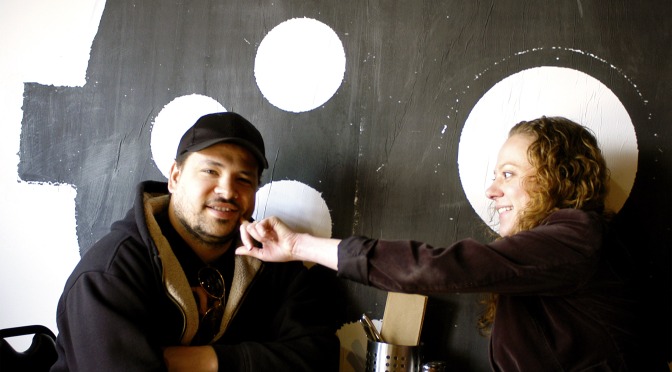 Well … actually, Grind is not exactly a food truck. It’s a concession trailer towed by a pickup truck. And that, like the black, gear-like logo, is part of their story.

This may seem an unlikely path for Jesse, who was The Courier-Journal’s circulation manager for 15 years, or for Liz, whose skills have whisked her through careers ranging from graphic arts to marketing to lingerie department manager at Cincinnati’s Saks Fifth Avenue.

But even as Jesse worked hard at the C-J, he never really felt fulfilled in the corporate life. And, he says, that unease grew as he and Liz watched employee buyouts shrink the newspaper’s staff. Would he be next? They decided to fashion an escape plan.

Jesse, too, boasts a toolbox of creative skills, but one skill stood out: He has always loved to cook, and had often dreamed of starting a restaurant. Why not? He enrolled in night classes at Jefferson Community and Technical College’s culinary arts program.

Soon they felt it was time, but they didn’t move quickly. They spent many nights with papers spread across the kitchen table, reading, thinking, running Google searches. A restaurant would be great, they decided, but a food truck, frankly, was more practical.

But even a food truck can be risky, Jesse mused. “A used step van? Maybe it runs now, but you don’t know how long it will run. But we knew we could get a pickup truck to run.” So they bought a used concession trailer, complete with a big side window, and refurbished it on weekends.

Deciding to specialize in burgers was easy: Making an excellent burger requires only minimal equipment — a griddle — and you’re good to go. That led to the name, “Grind,” reflecting their firm commitment to grinding their own beef, bison and lamb, using top-quality, locally grown, natural meat and vegetarian alternatives.

They keep the menu simple: a basic burger, a bison burger, a house-made veggie burger (with a separate grill to keep it meat-free). Then Jesse lets loose his inner Iron Chef with wild and wonderful variations. The “B&B,” for instance, is a burger topped with Brie, bacon and habanero jam. People were doubtful, Jesse said with a laugh, until they tasted it. Now it’s one of their most popular options.

A recent daily special went a step beyond that: Jesse’s inspiration tops the Grind burger with — get ready for it — Mexican cotija cheese, pickled tomatillo and onion, fiery “Goss sauce,” and “corn-truffle aioli,” made with the Mexican delicacy, corn smut, that Mayan Cafe’s Chef Bruce Ucan made locally famous.

They won’t sell fries from the truck, only potato chips. This irritated hungry diners at first, but it makes business sense: A fryer full of hot oil is dangerous to transport and lots of work. Without it, their insurance costs plummet.

About that logo? It’s a scanned image of the grinding plate from the Cuisinart meat-grinder attachment that they used at first. (Now they’ve graduated to a high-power commercial grinder that can grind 100 burgers in 20 minutes, Liz said.)

They rolled out the truck in spring 2012 to almost immediate applause. Liz brought her Saks Fifth Avenue experience to bear, consciously positioning Grind as a luxury, high-end product with a sleek look to match.

“It sounds a little crazy, but I learned about doing luxury branding at Saks,” Liz said. “When we started the truck, I told Jesse that Louis Vuitton never gives freebies to celebrities. If they want Vuitton, they have to buy it. So when you see a celeb carrying Vuitton, you know they wanted it enough to pay for it. We wanted to be the luxury brand of food truck in the city, the Vuitton of burgers. People couldn’t understand a $10 burger at first, so we had to play it smart.”

To anyone considering getting into the food-truck business, Liz and Jesse suggest a healthy dose of reality. “Some people pay $100,000 for a truck, but they’ll never pay that off selling lunch. Others are more realistic.”

“The advantage of a food truck is low overhead,” Jesse added. “Keep it low. There’s a huge misconception that you’re going to open a food truck and people will line up for your food. Liz has a marketing background, she’s able to advertise. She knows social media. But it’s hard.”

And now Grind has opened a restaurant, too: the small spot at 3311 Preston Highway that had previously housed Oasis Sushi and Soul Food. They hadn’t planned to make this move for another year or so, but a combination of events made it happen. On one hand, Metro Health will soon require food trucks with “intensive preparation” — such as grinding burger meat — to do so in a commissary, not on the truck.

And, then, a location near their home became available. The size was right. The kitchen was right. It became the Grind commissary and restaurant, now open Wednesdays through Saturdays for lunch and dinner. The food truck is parked for the winter now. The restaurant welcomes you. And the Huots say they’re happy.