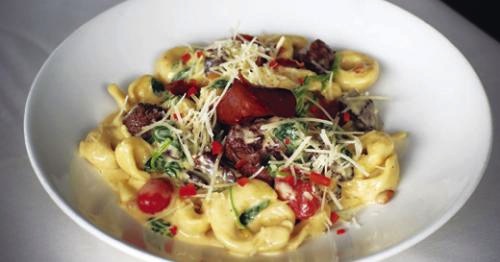 Meanwhile, Varanese, who settled into his eponymous new establishment (a former service station, later Red Lounge) without missing a beat, is going strong on Frankfort Avenue.

What did you like about Azalea? The pretty dining room? The outstanding al fresco option? The appealing bill of fare that was always creative but never over-the-top? The attractive bar and decent beverage program? The music that accentuated the mood without overwhelming it? Or just the plain and simple reality that it was a comfortable place to hang out, drink or dine, or best of all, to do all three of those good things?

Happily, even with the shift from the inner suburbs to an urban “restaurant row,” Varanese has assimilated all those concepts in ways that make fans of Azalea happy while accomplishing something completely different.

The space is small. We are, after all, talking about a former service station. But a remarkable “water wall” tinkling down one side of the dining room somehow expands the space. So does the addition of a small, cozy bar and more private dining room connected to the main dining room.

Even more striking than the water wall, perhaps, is the serpentine glass wall that turns the dining area into a roughly triangular space, a transparent curtain that — even on relatively warm evenings during the recent heat wave — can be rolled back, opening the entire dining room into a patio where the distinction between indoors and out almost disappears, except insofar as blissful air conditioning still seems to work in the portion under roof.

John Varanese, who this year joined the growing crowd of local chefs who’ve made the trek to New York’s James Beard House, continues to please with an eclectic bill of fare, consistent in style although changing frequently to take advantage of fresh seasonal produce.

By choosing one from Column A, one from Column B, the diner can pull together a small-plates dinner or full meal from about 30 selections, including 15 appetizers, soups and salads, a quartet of “light fare” sandwiches, eight full-bore entrees, and another four apps and four entrees from the day’s specials. One pricey main the other night topped out at $38 (for a grilled 18-ounce Angus Cowboy rib eye steak big enough for two), but most entrees fall in the more affordable teens and $20s, and those small-plates apps all satisfy for less than $10 … or you can settle in for the evening with a taste of just about everything on the $28 appetizer platter.

There’s full bar and cocktail service, of course, and a decent selection of craft beers (with limited locals) to go along with the standard industrial beers; the wine list, like Azalea’s, is extensive and diverse in style and price, served in attractive wine glasses. There are a few triple-digit trophy bottles but plenty of good picks in the $30s, with a limited number of lower-end wines available by the glass for one-fourth of the bottle price.

An amuse-bouche of palate-teasing bruschettas — tangy-sweet chopped tomatoes on oval slices of toasted baguette — started the evening on the right note, and glasses of Ruta 22 Malbec ($7.50) and Mas Neuf rose ($8) kept it that way. Another freebie soon followed, a pair of soft bread sticks, glistening with garlicky oil and flavored with toasted shreds of cheese.

Crunchy, salty fried things are hard for me to resist, so I succumbed to the cheese spheres ($7) — five crunchy brown balls of molten mozzarella dotted with bits of spinach and artichoke, crisply breaded and fried. They were served with a bowl of marinara-style tomato-herb dipping sauce topped with shredded cheese.

Speaking of crisp fried things, the fried green tomato salad ($7) was hard to say “no” to, as well. Separated onto two plates for sharing, each portion consisted of two thick rounds of steaming, still firm green tomato cloaked in a light fried breading, served atop bibb lettuce leaves and garnished with a thick, creamy buttermilk dressing, mild goat cheese crumbles, and crumbled prosciutto.

A bowl of sauteed beef tips and cheese-filled tortellini ($17) was dressed with a creamy, earthy Gorgonzola cheese sauce and tossed with baby spinach leaves, grape tomatoes, pine nuts, grated cheese and more of that prosciutto.

I noticed a menu footnote: “Chef will create vegetarian dish upon request.” After all those fried apps, I was ready for something healthy. The server said the veggies “come from the chef’s garden.” I spotted pattypan squash, spinach, grape tomatoes and other good things steamed crisp-tender, plus diced “butternut squash hash,” all served on a creamy, rich mushroom risotto, with watermelon-and-onion salsa on the side ($16).

Chocolate lava cake ($7)? Don’t mind if I do! Perfectly made and accompanied with a small dish of ice cream, it put an exclamation point on a fine meal.