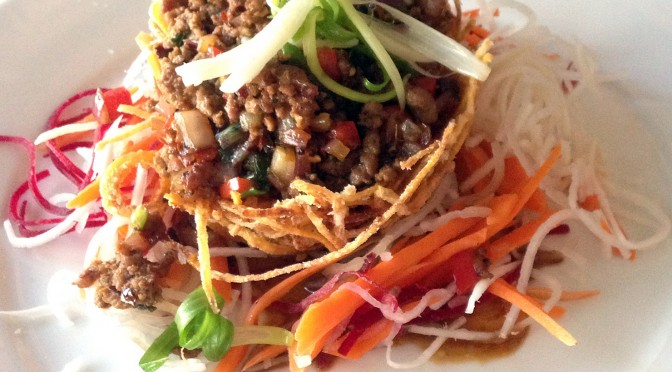 Hey, when did fusion cuisine stop being a thing? It seems like only yesterday – well, OK, maybe it was the ’80s and ’90s – when top chefs had everyone oohing and aahing over such multicultural goodies as Wolfie Puck’s smoked salmon and caviar pizza at Beverly Hills’ Ma Maison or Jean-Georges Vongerichten’s pricey Thai-French mash-ups at his almost-eponymous Vong restaurant in New York City.

It didn’t take long for Louisville to get into the act, and some of our own top chefs, including Seviche’s Anthony Lamas with his pan-Latino creations and Ed Lee with his Korean-Southern-all-over-the-place inspirations, eagerly embraced the muse to fuse.

But what has fusion done for us lately? Vongerichten oversees what may be the priciest chain operation in the world. Puck went corporate, too, but his lower-price, faster-food chain was last seen slinking out of Louisville’s downtown Convention Center without a word of farewell, the space now filled with a police mini-station on watch for roving gangs.

Louisville’s fusion chefs, though, joined by many more (including the noteworthy restaurant brothers Steven and Michael Ton of Basa, Doc Crow’s and La Coop), are still going strong. It’s just that you don’t hear them using that particular f-word much anymore.

After all, what’s new about fusion? Sure, trendy ’80s chefs gave it a name and a boost, but people have been “fusing” food as long as there have been hungry people who travel. The Portuguese took fried goodies to Japan, and before long, the Japanese were happily munching tempura. The Italians brought tomatoes home from the New World and noodles from China, but that doesn’t make spaghetti with marinara sauce one bit less Italian.

I can’t think of a better poster figure for this movement than Chef Peng Looi, who’s been feeding us fusion for 20 years or more at his popular restaurants Asiatique and August Moon. It’s a gig that comes naturally to a guy from Malaysia, a tropical Asian food paradise where, he says on the August Moon website, “there is an exciting panoply of ingredients and cuisines.”

From Asiatique’s original location in St. Matthews (near, as Louisville tradition has it, the place where the big Sears store used to be), to its current stylish venue in the Highlands (where the old Cherokee Dairy used to be), Peng Looi has created memorable dishes that fuse the flavors of Malaysia, Southeast Asia, China, the Americas and beyond.

Looi changes out the menu periodically, responding to the bounty of fresh seasonal produce. More than a dozen small-plate starters are priced from $8 to $10; another baker’s dozen mains, sorted under “From the Sea” and “From the Land & Sky,” are $18 to $28.

As you’d expect in a place with a striking glass bar and comfy basement lounge, the beverage options are above reproach, with creative cocktails and a well-chosen wine list, plus more than four dozen bourbons and short lists of beer and sake. We quenched our thirst with Sokol Blosser Evolution #9, an off-dry white wine from Oregon that worked well across our range of Asian-fusion fare.

We started with a bite-size amuse bouche, a tea-smoked quail egg on a spoon that made us wish for more, and moved on to striking, beautifully plated small plates and mains without missing a beat.

The wok-seared ground lamb appetizer ($8.50) scored on many levels. Loose and separated lamb ground with bell pepper, scallion and sweet onion – a sloppy joe without the sloppy – was deeply flavored and gently spicy, served in an appetizing crunchy sweet potato basket on a nest of strands of turnip and carrot.

A roasted eggplant starter ($8) also hit the spot: a row of oblong chunks like dark miso- and garlic-glazed dominoes, dotted with sesame seeds and served on a bed of spicy kim chee.

A meat-free main built on two blocks of golden-brown fried tofu ($18) was another winner, a vertical construction atop sliced baby bok choy and shiitake mushrooms, sprinkled with ginger dust and crisp-fried garlic slices, accompanied by a rich shiitake polenta and schmears of ginger-miso and jalapeño oil.

With the $45 bottle of wine, the tab for two came to $124.02. Service was competent, professional, caring yet unobtrusive, earning a $30 tip