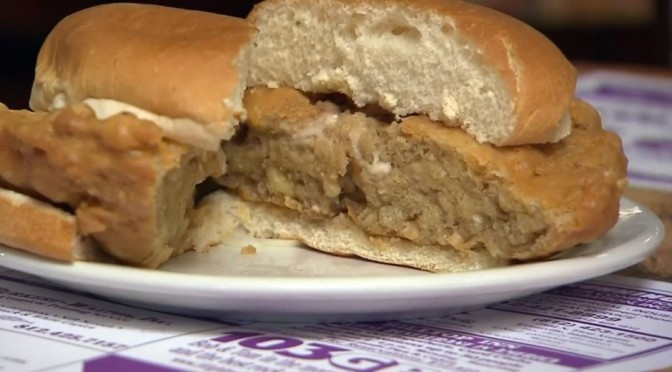 First Buffalo wings became a thing, emerging from the snowy city’s iconic Anchor Bar to arrive as a national phenomenon in the 1980s.

A decade later, Chef Shawn Ward brought his upscale take on shrimp and grits to town, turning this simple dish of po’ folks in South Carolina’s Low Country into an entree so popular that it inspired dozens of variations.

More recently, we got Nashville! Or we got Nashville Hot Chicken, anyway. Who knows why we needed more chicken in a town that’s been frying the tasty bird for years and that gave birth to multinational corporate KFC? Wait, maybe that’s why. But we digress. Nashville hot chicken really is hot in Louisville now, dripping fiery red sauce that transforms its base of ordinary white bread into a treat.

So what’s next? What other city’s local culinary treat can we culturally appropriate and turn into the next big thing?

Enter Chef Zoltan Ceausescu, whose native Transylvania sent him over with a grant sufficient to get him through culinary school without a student loan. Prowling the region in search of indigenous delicacies, Ceausescu (who says “call me ‘Vlad’” with a sharp grin), found his way to Evansville’s West Side Nut Club Fall Festival last October, and fell in instant love with a local specialty, the deep-fried brain sandwich.

“Brains! Brains!” the Transylvanian chef shouted with delight. Somehow – with an eerie wink, he declined specifics – he acquired the top-secret recipe, and now he’s drawing crowds to his East Market Street storefront, a dark and echoing room on the fifth floor of one of the new NuLu high-rises.

Service is simple – there is apparently only one employee, Vlad himself – and it is difficult to comment on the decor beyond the heavy, hand-hewn oaken tables, as the dining room is really too dim to make anything out. The menu, however, is enticing, with a dozen brain-based dishes fairly priced at $7 to $12, representing culinary traditions from Evansville and around the world.

We tried several, starting with the classic Evansville sandwich, in which a slice of brain is pounded thin, like a schnitzel or scallopini, then deep fried until it is crispy on the outside, spongy and squishy within. It is served sizzling hot on simple but locally produced white Wonder Bread, with mustard and ketchup available in squeeze bottles.

Other tempting delights include the NFL Brain, served with cracked nuts and a smashed cantaloupe ($8); Boxer Brain, pounded and shaken ($10); Burgoo with Squirrel Brain, an Appalachian specialty ($12); Bevin Brain, an empty bowl ($0), and BSE Brain for the Fearless ($200), an old-time Evansville special made with specially imported, no longer legal cow brain.

With a glass of Hungarian Egri Bikaver “Bull’s Blood” red wine, lunch for two was a thrifty $18. No tipping.