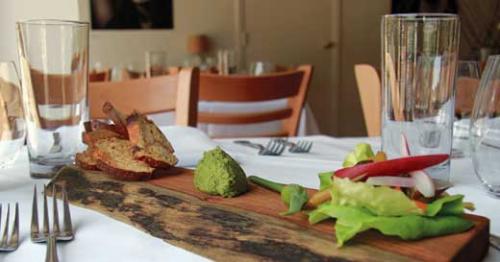 Looking for ramps in season? Garlic scapes? Fancy purple kale? Or maybe a tasty omelet fashioned from just-laid free-range eggs? You’ll find it all at the Bardstown Road Farmers Market where Ivor Chodkowski’s Field Day Family Farm booth is the place to go for what’s arguably the fanciest produce on the premises.

Chodkowski is a leader in the region’s burgeoning small-farm and locavore movement; he runs a community-supported agriculture operation, has been involved in the Community Farm Alliance, and set up Grasshoppers Distribution, which creates markets for local small farmers by connecting them with local restaurants.

So it should come as no surprise to see Chodkowski at the helm of Harvest, a new restaurant in lavishly restored quarters on East Market, an eatery that’s a virtual celebration of all that’s flavorful, natural and local.

Harvest pledges to keep its bill of fare at least 80 percent from local farmers. You’ll spot many of them in sepia portraits on Harvest’s walls, and an intriguing “foodshed” map of central Kentucky and Southern Indiana spotlights the farmers who supply the restaurant and pinpoints their farms.

Talk about the elements for success: Take sustainably produced food from regional farmers. Add a warm, comfortable (if somewhat noisy) environment that was once the old Mayan Gypsy location (later a short-lived restaurant “incubator” that endowed the space with a large, modern kitchen). Plug in an all-star team in the kitchen (at the top of the batting order, Chef Coby Ming, formerly at Wiltshire on Market, and Chef Josh Lehman from Bank Street Brewhouse) and in the front of the house (where Cassandra Hobbic, Proof on Main’s first maitre d’, now presides). This is an impressive combination, and it yields a high-scoring product.

The menu changes frequently to accommodate the seasons and the quantity and supply issues that accompany working with small, local farms. Fear not, it’s consistently good. On the night of our visit, the menu featured lots of arugula and spring greens, asparagus, chicken, pork and beef. Appetizers were all under $10; prices for eight main courses ranged from $8 (for a spicy chicken salad sandwich) to $19 (for fried chicken, sourced, I believe, from Rhodelia, Ky., farmer Adam Barr, whose chickens are the best I’ve tasted this side of France’s poulet de Bresse).

Wine, beer and cocktail lists are short but creative, well chosen and fairly priced. Wines aren’t local, and frankly I’m just as glad. To the dismay of obligate locavores, neither the Ohio River Valley’s climate nor its tradition are suited to the production of world-class wines. This isn’t Napa, folks. We made do with a California favorite, Au Bon Climat 2009 Santa Barbara Pinot Noir ($41), served in stemless wine tumblers, and were pleased.

Our friend Lucinda joined Mary and me for dinner, and we cut a considerable swath through the menu, following our usual happy practice of ordering three of each course and sharing it all. We judged the food very good to outstanding throughout, and service never missed a beat.

The chard and green garlic hummus ($9) was a spectacular presentation, a foot-long wooden board bearing at one end a generous mound of pale-green, textured hummus flavored with aromatic greens; at the other several crunchy, thin-sliced grilled pretzel crostini; and in-between a colorful mini-salad of leaf lettuces.

A cold asparagus-and-sorrel soup ($6) was absolutely delicious, a thin puree carrying the vegetal spring flavor of asparagus lifted by the tart, almost sour lemony twang of sorrel and decorated with what looked like chive oil. A silken, sweet dairy quenelle floated in the bowl. It was the kind of dish that could lower the heat index on a summer night by at least 10 degrees.

Perhaps the best of three good apps was the smoked goat cheese lasagnette ($8), a pair of thin pasta rounds sandwiched around an aromatic herb pesto and plated on an intense, earthy smooth roasted-mushroom jus, with a crunchy garlic crouton perched on top.

Main courses were all fine, reminding us that real flavor hasn’t departed from 21st-century meat and poultry, only that it’s a lot easier to find from artisan farmers than industrial feedlots.

A breast portion of a small Barr Farm chicken ($19) was richly flavored, crisply buttermilk-battered and fried, then stylishly plated with a thick coat of smoked-peppercorn white gravy and served with a bouquet of fresh arugula and a tender biscuit hoecake. It was a far cry from the Colonel’s, and I say that as high praise. An optional side, kaffir lime spinach slaw ($3), got Mary’s two thumbs up.

My pick, the smoky bourbon BBQ pulled pork ($17), was deeply flavored if a bit idiosyncratic; tender, intense locavore pork was subtly smoked and sweetly sauced with a dark, piquant bourbon sauce. An oblong of smoky, sweet bacon bread pudding kicked it up a notch, as did a ration of grilled spring vegetable slaw.

We couldn’t handle three desserts but kept up the pattern by summoning three spoons to share a sweet, dense bourbon bread pudding with pecans and caramel ($6).

An outstanding dinner for three, including the wine, was $130.04, and service earned a $26 tip. The share for two without wine would have come in around $55, a fair price indeed.

Another all-star at Harvest

I got so busy hailing local stars Coby Ming, Josh Lehman and Cassandra Hobbic in last week’s review of Harvest that I neglected to give credit to two more team members who deserve mention: Andy McCabe, who spent more than five years at Le Relais before moving to Chicago to work in the noteworthy restaurants L2O and Blackbird, came back to Louisville to help open Harvest as its sous chef. Also, pastry chef Patty Knight is the mind behind Harvest’s seductively creative desserts.