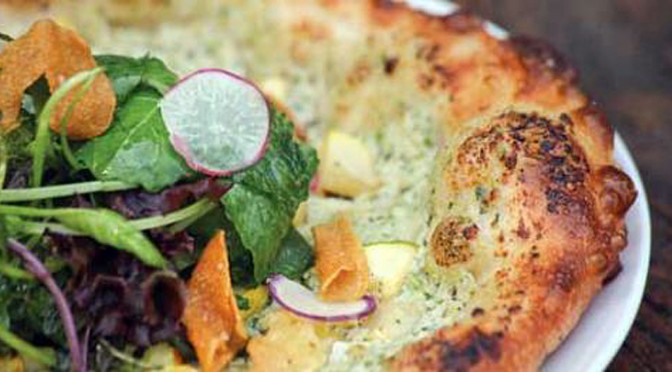 The idea that there was a connection between stuffing our faces, feeding hungry people locally, fighting hunger around the world and pushing back against the food industry’s excesses from Frankenfood chemistry to horrific concentrated animal feeding operations came as a new and exciting notion back then.

After I took the pulpit as the Louisville Times’ dining critic in 1984 (30 years ago this past spring, yowza!), I was pretty darn disappointed to discover that you could read about these things, and think about these things, but you couldn’t really eat this way in Louisville -not unless you grew and cooked your own stuff. I whined about it in print now and then, but in those days, few Louisville readers were ready to grasp what I was banging on about.

So I was mighty excited when Kathy Cary opened Lilly’s in 1987, finally bringing to Louisville a locavore concept (another word not then invented) that celebrated regionally grown meats and produce, presented in a full-service restaurant with creative culinary chops and upscale flair.

Lilly’s spawned few immediate imitators, though, and it would be another decade-plus before the first local farmers market came along, perhaps not coincidentally also on Bardstown Road.

Eventually, as Pollan and Bittman and many other writers came along, with movies like “Food Inc.” and “Forks Over Knives” screening in mainline theaters, the idea of linking food, community and ethical consciousness finally gained traction.

I know I’m not the only one who has begun looking skeptically at what I eat and where it comes from. Feedlot beef, factory-farmed poultry and pork, and industrial dairy and eggs don’t appetize me much any more.

I’m put off by the way the industry treats its animals and the way it treats its human working stiffs. And yeah, the threat of salmonella and listeria and e. coli, not to mention the unknown long-term effects of chowing down on “food” laced with growth hormones, herbicides, pesticides and genetically modified organisms, kind of puts me off my feed.

Happily, just about every new eatery with a yen for a trend does farm-to-table these days. But I can’t think of one with any deeper commitment than local farmer Ivor Chodkowski, who, with a bunch of associates, opened Harvest in NuLu just over three years ago.

Allowing a little wiggle room for, say, saltwater fish, or green leafy veggies in the winter, they shoot to have 80 percent of ingredients sourced within a 100-mile radius.

That’s a lot to love, and my early reviews lavished praise on everything except possibly its NuLu-style noise level, a dull roar that acoustical pads do little to abate.

So it is more in sadness than anger that I have to report that recent Sunday brunch and weekday lunch visits have left me vaguely dissatisfied.

OK, it didn’t suck. “Disappointing” covers it. On a recent visit for lunch with Dan and Henry, chef buddies visiting from Buenos Aires, and Dan’s parents Jack and Mickey, there was no better way to describe what they called the least exciting meal of their stay.

Our server, Katy, was first-rate. But the kitchen was slow; the food was OK, but it didn’t snap, crackle or pop; and maybe most disappointing, the current lunch menu was short, limited and spoke more of winter than the fresh bounty that’s now hitting our farmers markets.

(News flash: I’m told Chef Coby Lee Ming will roll out new seasonal menus shortly. I’m more than willing to head in for dinner sometime soon and see how that works out.)

Awaiting that follow-up, I’ll keep the food report brief. A veggie pizza ($14) looked good -a plate-sized bread-like crust smeared with pesto cream and topped with a few zucchini bits and a pile of fresh arugula. French fries ($5) were house-made, enhanced with a roasted tomato aioli that I could eat with a spoon.

A catfish sandwich special ($14) was fine: several mild fillets, coarsely breaded with cornmeal and lots of black pepper, dressed with a fresh, creamy chopped-veggie slaw on a pretzel bun. A beet salad on the side was spicy and tasty, but why use pickled beets when you’ve got fresh in the garden?

Our chef pals may be spoiled by Argentine beef, but a Harvest burger ($16) left them under-impressed despite its local grass-fed provenance. An un-announced 50-cent upcharge for mustard and hot sauce seemed cheeky, too, even if they were house-made and delicious.

With iced tea, our share of lunch for two came to $34.98, spendy enough that you want your meal to be mighty good. A Sunday brunch a while back left similar impressions, although I must praise rich scones and the biggest biscuit I’ve ever encountered.