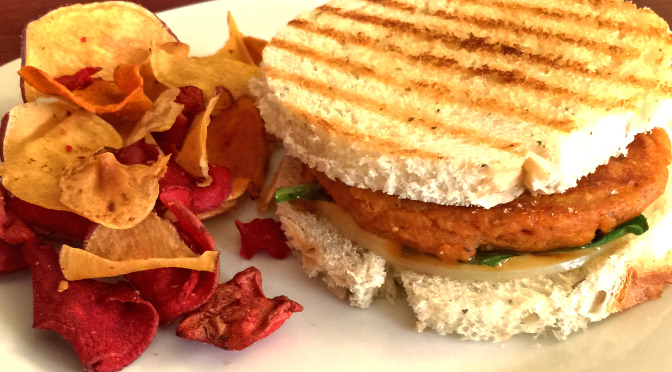 Let’s face it. If I was mean enough to mark a place down because its name is hard to say, then this charming little bakery and b-r-e-a-k-f-a-s-t and lunch eatery at the corner of New Albany’s Main and Bank streets would be in a heap of trouble.

But I wouldn’t do that. Actually, BREAD and Breakfast is exceptionally amiable, the kind of place that gives me the happy fuzzies just from thinking about it.

It’s been operating for a little over a year now, drawing very little notice. Could that be because its name is so hard to pronounce? No. Let’s not even go there. Let’s just agree that it’s good enough to lure me back across the river, around the bridge construction, for a second trip to a casual New Albany eatery in a month’s time.

Better yet, this place comes with quite a story, the story of its baker and chef and owner, Laura Buckingham. Laura, a 20-something with a quick and friendly smile, enlisted in the military and was dispatched to Iraq, where she served for a time in a combat zone.

?Back home in Southern Indiana, she laid down her sword and shield and turned to the much more peaceful and creative enterprise of baking artisanal bread. She sold loaves from a stand on a country highway in Floyds Knobs for a while; popularity soon drew the operation into the New Albany Farmers’ Market, and then, about a year ago, she opened her bakery in an attractively renovated New Albany storefront.

With the help of a successful Kickstarter campaign to help finance an artisan oven, new front doors appropriate to the historic neighborhood, and other necessaries, she started baking bread and fashioning a short menu of breakfast and lunch dishes last November, using locally produced meats and produce – even locally milled bread flour.

(Culinary pedants might want to know that Purnell’s “Old Folks” sausage, a commercial brand that happens to be located in Simpsonville, Ky., counts as local; but it’s geographically accurate, even if you can get it at Kroger. And they’re getting natural, pastured sausage from Miller’s Meats in Corydon, Ind., too; and sourcing eggs, bacon, steak, syrup, pork roast, honey and most of the produce within the region. That works for me.)

Is this a bakery? You bet! One sure sign of a working bakery is the appearance of white floury footprints between the kitchen and the baker’s racks, and this clue showed up as clearly as a CSI outline on the dark carpeting in Bread and Breakfast’s back room, where sourdough and pumpernickel loaves were on offer this particular day. (The cinnamon rolls, which are said to be memorable in size and flavor, were all gone by the time we got there. This absolutely justifies a trip back. They’re $3 each, $24 for a dozen.)

And yes, it’s a restaurant too, and one that fairly qualifies as “charming.” Four or five tables fit into the small front room. A smaller back room has space for two more tables and the retail bread racks. Service is friendly, chatty and hospitable, if occasionally sporadic. Bring patience and a good appetite, and you’ll be happy.

The menu isn’t overly long, but it contains a good selection of breakfast and lunch dishes, many of them built on the bakery’s warm loaves.

Ten breakfast items range in price from $5.65 (for an egg, bread and veggie strata in a cup) to $9.50 (for the breakfast tour, featuring a little bit of everything including biscuit and gravy, sausage or bacon, two eggs, home fries, French toast or hotcakes). A reference to a local cardiologist was not mentioned.

No alcoholic beverages or commercial soft drinks are sold, but coffee, tea, lemonade, OJ and milk are on hand. I thought the hot English breakfast tea ($2) was just fine. Mary, who is much more of a tea geek, caught a whiff of coffee in her cuppa, sending her off on a rant about the purported evil of getting hot tea water out of a coffee maker. “I’d know that taste anywhere,” she muttered. Yeahright, whatever.

The breakfast skillet ($8.15) sounded like another cardiologist’s nightmare but was actually a stick-to-your-ribs delight. Served in a sizzling 6-inch black-iron skillet, it’s a stack of home fries, country sausage and cheese, topped with a fried (or scrambled) egg and a homemade biscuit.

An unusual house-made veggie burger ($8.50) was fashioned from a thick slice of tender sweet potato, dressed burger style with provolone, baby spinach and caramelized onion, and a sweet red-pepper relish, served panini-style between round slices of house white bread.

Potato soup ($4) was thick, very rich and consoling, another winter winner.?
A filling lunch for two was $26.91, plus a 20 percent tip calculated by the iPad point-of-sale system.