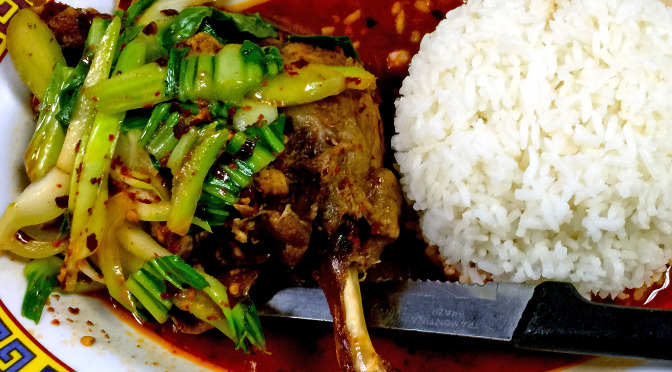 Hey! Vietnam Kitchen’s got duck! Succulent, delicious duck, fatty and rich! And they’ve got “mock duck,” too: an alternative invented by vegetarian Buddhist monks! Either way, if it looks like a duck and quacks like a duck, it must be … well, you know.

REAL DUCK: Go and boil your bottoms, son of a silly duck! I blow my nose at you!

MOCK DUCK! You empty-headed animal food-trough wiper! Your mother was a hamster, and your father smelt of elderberries!

Stop it! This column is getting silly.

Oh. Sorry, then. Where was I? Vietnam Kitchen! I was amazed to discover recently that our friends Anne and Don had never been to this iconic eatery. Hard to believe, I know. They may possibly have been the only remaining foodies in Louisville who hadn’t been there.

We needed to correct this ASAP, so the four of us headed to the South End for Vietnamese dinner (and a foodie tour of the nearby international Valu Market).

I wonder if the menu has changed. There seem more Chinese and other non-Vietnamese dishes than I remembered. Appetizers include a number of items that strongly resemble dim sum (not that there’s anything wrong with that). They also offer mooshu pork ($9.75), General Tso chicken ($9.70), lots of fried rice options, and even Pad Thai ($8.30).

No matter, we still found plenty to choose from, and most of our picks made us happy.

Xíu Ma, a $3.75 brace of bite-size dumplings whose Vietnamese moniker sounds very much like the Sui Mai at just about every Chinese restaurant in town. Stuffed with salty minced pork and shrimp, the tender dumplings were okay, but as Anne summed it up: “Tasty but nothing special.”

Egg drop soup ( $1.89) seemed Chinese-y too. It startled us with its bright orange color, the exact shade of Cheetos. “Nothing natural could be that color,” Mary said, horrified. A cautious taste revealed a rather uninspiring soup with only a faint chicken flavor.

Bánh xèo chay ($6.65), a Vietnamese favorite that shows the culinary influence of the late and unlamented French colonizers, resembles a crepe or a light omelet, seasoned with aromatic spices, pan-cooked until the edges are crisp, filled with crisp bean sprouts, tofu squares and sauteed onions and folded into a golden half-moon. Add a splash of salty-tangy nuoc cham sauce to kick it up another notch.

A meatless entree, dau h? xào cà tím, nam tuoi ($8.95), a simple eggplant, mushroom and tofu stir-fry, was tasty enough, but Anne said it didn’t seem that different from Chinese restaurant fare. She would have been happier, too, with a more generous ration of eggplant.

Another Vietnamese main dish, bun bo xao xa ($9.10), drew more applause. A piquant but not overly fiery stir-fry of chicken (or optionally, beef or pork) with lemongrass, mushroom and onions, it was served with thin wheat noodles. Don approvingly declared it a “good flavor combo.”

And so we circle back, finally, to the battle of the duck taunters!

Taken on its own, mock duck, mì can xào dau ($8.95), could fool the unsuspecting, I think. It’s bite-size chunks of seitan, a dark-brown, chewy, salty-savory meat analogue made from wheat gluten. Marinated, stir-fried crisp-chewy, and served atop a generous pile of spicy stir-fried green beans with plenty of white rice, it was one of the best dishes of the evening.

The “real” duck, Vit Phá Lau ($11.75) started with an outstanding duck leg, perhaps roasted, then braised in spicy broth. It was falling-off-the-bone tender, juicy and deeply savory. Mary raved about the duck, but wasn’t so happy with the veggie component, Shanghai bok choy, a few limp leaves seemingly draped on top as an afterthought.

The judges split. I thought the mock duck was amazing, and I cleaned my plate. Mary saw it the other way. “The mock duck was very, very good,” she said. “In a meal without animal flesh it fills a duck-shaped space. But real duck and mock duck should not be compared side by side. The real duck will win every time.”

So there you have it. They’re both protein, and they’re both good. Pay your money and take your choice. Or do as we did, and take both!

By the way, Vietnam Kitchen is open Christmas Day, and usually draws a happy mixed crowd of unrepentant heathens and after-church revelers.