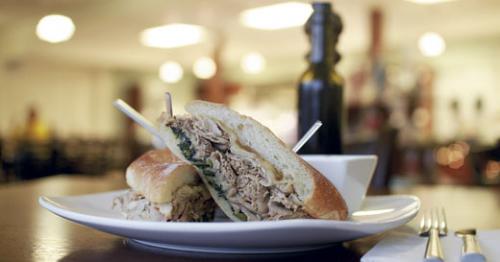 Let me be frank: I’ve had a hard time understanding why so many of my foodie friends have been going ooh-la-la over the NuLu incarnation of Ghyslain. They’ve declared it “sophisticated,” celebrated its French accent, and hurried in to buy restaurateur-chocolateur Ghyslain Maurais’ fancy candies by the sack.

I could never quite share the excitement, and it hasn’t been for lack of trying. I went a couple times before writing my first review in May 2011, and I’ve been back a number of times since. As I wrote in that early review, “Ghyslain isn’t a bad place to settle down for lunch or a light dinner.”

With all the outstanding alternatives in hip and hoppin’ NuLu, though, I just haven’t seen the point in going out of my way to dine at this Indiana-based mini-chain that reminded me a bit of a more pretentious Panera with a French accent.

But a funny thing happened the other night on the way to the new Ghyslain at Westport Village. I put my expectations on the shelf and went in with an open mind and palate, and … Hey, now! This food is good! Good enough to cause an immediate attitude reboot: I would go back for more of this.

There’s nothing particularly noteworthy about the setting, a good-size, minimally decorated shopping-center space around a corner behind Playthings Toy Shoppe in the popular suburban shopping village. In quick-service casual style, you walk up to the counter, place your order from the wall menu, take a number to put on your table, and wait for the cordial servers to bring out your meal.

And when this meal comes out, chances are it will make you happy. This is comfort food with a French accent rendered international by a diverse, ’round-the-world menu. That kind of broad approach can sometimes be a recipe for problems, calling on the kitchen to master a diverse collection of unrelated ethnic flavors. But Ghyslain Westport handled it all well, pleasing every palate in a group of 10. I carefully polled everyone to see if I could pry out a single complaint, but everyone seemed as happy as the proverbial well-fed clam.

The menu, which carries through lunch and dinner and also includes a short list of breakfast options, is on the casual side, much of its space filled with soups, salads, sandwiches, and shorter selections of entrees and platters. Curiously, the salads, sandwiches, entrees and platters all fall within the same general price range, an affordable neighborhood from $10 (for various items including bruschetta on a baguette, Lorraine or Greek quiches or a breakfast sausage brioche) to $15 (for mariniere mussels).

There’s a brief selection of wines by the glass (all $7.50) and domestic ($3.50) and imported ($4.50) bottled beers, none local or craft-style, plus designer waters, organic tea, coffee and espresso drinks, as well as all the pure Louisville tap you can drink, handily served in tall glass tumblers from a dispenser station.

And, of course, chocolate, a Ghyslain trademark, including individual candies, decadent desserts, and a remarkable collection of chocolate-based gifts such as a pair of all-chocolate stiletto-heel shoes or a chocolate Santa and his sleigh.

Our group, as mentioned, cycled through a good sample of the menu, praising the French dip “au jus” sandwich ($13), a traditional rendition with tender, thin-sliced beef, browned onions and Provolone with a rich broth for dipping; Scottish smoked salmon ($13) with capers, lemon and cream cheese served open-face on baguette; the chicken curry naan ($12), built like an Indian gyros with sweet-spicy curry rolled in toasted flatbread; and a rich, golden Quiche Lorraine ($10).

A roast pork sandwich ($12) could qualify as a pork French dip, with plenty of thin-sliced, flavorful pork dressed with a thin layer of broccoli rabe and melted Provolone, with a pork-scented broth for dipping. A side of farro grain salad was intriguing, an Italian wheat grain that looks a bit like Israeli couscous tossed with tiny green beans and black olives.

The pot pies ($12 for chicken, $11 for veggie) are stick-to-your ribs good, flaky pie crust baked atop a heavy bowl with the goodies baked into a simmering, thick and rich cream sauce. A side cup of potato leek soup ($4.50) was similarly rich and comforting.

Now I owe it to NuLu Ghyslain to go back for another try. I’ll let you know when I do.