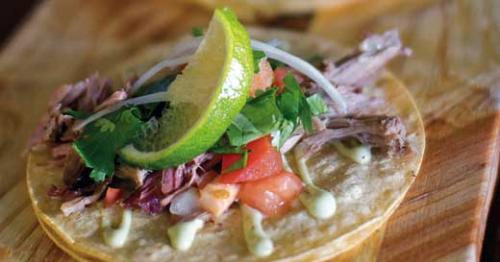 For nearly 80 years, this basement space in Germantown has been home to some sort of bar or eatery. Most recently, it was a popular hipster hangout and vegan café called the Swan Dive, which sadly closed its doors in October.

In its place comes the equally charming (and carnivore-friendly) Hammerheads. Specializing in smoked meats prepared in a pair of on-site smokers, Hammerheads still has plenty for veggie lovers. The venue also has been brightened up a bit with a splash of yellow paint and some additional lighting.

The new proprietors, Adam Burress and Chase Mucerino, veterans of the local dining scene, also installed a stuffed hammerhead shark just above the entrance to make sure nobody misses the joint.

My father grew up in the Swan Street neighborhood, so I invited him and my mom to join me in checking out the latest incarnation of a basement bar he once knew as Ed’s. Dad recalled his grandfather buying buckets of beer (the original form for “growlers”) at Ed’s. He also remembered that in 1947, at age 5, he accompanied his uncle to the place, whereupon he had his first sip of beer in a bar. (Yes, at age 5.)

The Hammerheads menu is built for carnivores but ranges far enough to please any palate. You can get a pork belly sandwich ($5), made with thick slabs of smoked pork, or a meatless Garcia burger ($7), made with sun-dried tomatoes, shiitake mushrooms and falafel.

Ever the meat-eating tribe, we each chose dishes built on a foundation of animal flesh: Dad went for the pulled pork sandwich ($6), Mom opted for an Angus burger ($7), and I chose the duck tacos ($8). Dad and I each ordered a Falls City draft ($3.50) from the above-average beer list, bringing his beer experience full circle some 60 years later. Mom opted for iced tea.

We ended up splitting an order of fries ($3), which was big enough to share, as well as a side of smoked macaroni and cheese, topped with panko bread crumbs, that carried a hint of flavor from the smoker. We almost opted for a second order of the delicious, creamy macaroni.

Kudos to the barbecue. The pulled pork was tender and smoky, served with a vinegar-based sauce that tasted like a cross between barbecue and teriyaki. I prefer barbecue sauce with more zip, but this had an interesting sweetness. I can’t recall having tasted anything quite like it before.

Mom’s Angus burger, served on a Kaiser roll, was small but packed plenty of flavor. The burger came dressed with a house-made sauce that appeared to be Thousand Island-based. One can also add blue cheese, smoked cheddar, pepper jack or American cheese for an extra 75 cents. I’m thinking the smoked cheddar would be the way to go here.

The duck tacos were so tasty I could have eaten five. They were served as a pair, taquería-style, in doubled soft corn shells, with the smoky pulled duck dressed with a tasty jalapeño aioli and topped with diced tomatoes and cilantro. Delicious.

There’s plenty to love about the Hammerheads menu. For one, the French fries were outstanding — cooked golden brown and skin-on. I can’t wait to go back and try the Grippo’s fries, which are coated in Grippo’s potato chips’ barbecue seasoning.

I also hear splendid things about the barbecued lamb ribs ($8 half rack, $15 whole), as well as appetizers like the smoked cheddar grit cakes ($6) and crispy mac-and-cheese balls ($7). One can also choose from “sliders” made with duck, pork or beef ($3 and up), which looked like miniature versions of the regular barbecue sandwiches. It’s a great way to try a little of each for about 10 bucks.

Even though we didn’t have room for dessert, it was tough to pass up the bacon brownies for just $3. That’s another “next time.”

On the negative side of the ledger, the blues and rock being piped into the small bar and dining area was a bit loud for the dinner hour. Also, while our server was friendly, well informed about the menu and always on cue, our food came out in waves. There was a good four- or five-minute lapse between my tacos arriving and Dad’s pork sandwich finally being delivered.

Nevertheless, the food was top quality and the presentation excellent — many dishes were served on beautiful wooden trays rather than plates. All this attention to detail is a sign of where Hammerheads (which has a Facebook page, complete with menu) is headed.

Looking about the confines, my dad reminisced that while Hammerheads was bright and had clearly been remodeled since his youth, the venue still had the same cozy feel it had in the days when he frequented the neighborhood.

And while it’s still tiny — “It never took too many people in here to make a crowd,” my dad observed — the new look and menu do seem primed for bigger things.