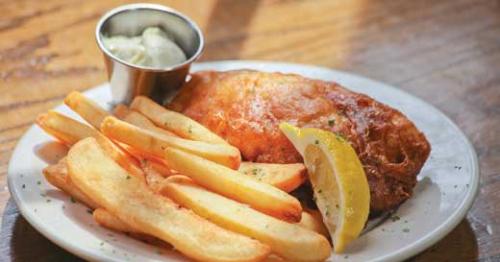 I’ll never forget my first and only visit to Ireland. We spent a week or two driving around the country, learning wrong-side driving and stopping at every pub we could find to enjoy a pint of Guinness. Damn, it was hard to find traditional Irish music, though. Pub after pub after pub, the food and the mood were Irish, but the music was international rock. When I finally found a crew with a harp singing “Danny Boy” in a tiny pub in Killarney, it was jammed with American tourists, of course.

You want Irish music? Check out Oxegen in Kildare County every July. It draws hordes of 100,000 or more, luring them in with performers like, um, Eminem, R.E.M. and Snoop Dogg. OK, let’s face it: It’s the same the whole world over.

Really, if it’s Irish music and huge crowds you want, you might as well visit the Irish Rover on St. Patrick’s Day. Personally, though, I think Yogi was right: “Nobody goes there anymore. It’s too crowded.”

But any other day of the year, if you want warm and welcoming Irish style in Louisville, you can’t improve on the Irish Rover, the amiable eatery that has become an indelible part of the Frankfort Avenue landscape since 1993.

Michael Reidy, who owns the Rover with his wife, Siobhan, retains every bit of his Irish brogue and enjoys an obvious acquaintance with the Blarney Stone. He is the kind of amiable Irish host who makes every stranger feel welcome. If you want a serious education in Irish whiskey, be sure to ask his advice about the score of brands that line up proudly among all the other potions along the restaurant’s cozy bar. (He talked us into shots of Green Spot and Connemara Peated, two distinctly different drams that had us sighing happily and exchanging sniffs and sips.)

If you don’t choose to make a night of it in the dim, pub-like bar, though, then step into the two peach-colored, lace-curtained dining rooms that make excellent use of the Rover’s venue, a 150-year-old brick dwelling of significant historical and esthetic merit.

The Rover’s bill of fare hasn’t changed much over the past 20 years. Many of the dishes are traditional Irish, starting with a basket of complimentary soda bread and continuing with options like the Dublin smokies seafood plate ($9.95) or Shanagarry fish cakes ($8.95), plus tastes of Scotland (Scotch eggs, $3.95) and England (bubble & squeak, $2.95), not to mention an occasional international surprise. (Jamaican pork sandwich or Cordon Bleu fritters, anyone?) This international element isn’t as surprising as you might think; I had one of my best Indian meals ever in Dublin.

Overall, the menu is long and varied and not terribly pricey. That’s how Irish comfort food rolls. You can start with, or make a meal from, small-plate “bar bites” that range from $3 to $9, graze a dozen soups and salads in the same price range, or turn to heartier fare with some 30 choices among hefty sandwiches, pub grub and pub plates that top out at $15 save for a $20 splurge on the Irish whiskey steak.

There are so many favorites here, it’s hard to settle on just a few. One of our friends is addicted to the Scotch egg, a hard-boiled egg rolled in sausage and deep-fried. Those Scots are a healthy bunch. Another small plate that’s often likened to crack is the salmon potato puffs ($4.95), a savory mix of chopped smoked salmon in mashed potatoes, formed into bite-size balls and deep-fried golden brown. Bangers & mash ($6.95), a pair of Irish sausages atop a mound of mashed potatoes, is another consistent favorite, as is the rib-sticking, hearty Guinness beef stew ($6.95).

On a recent evening out, we grabbed pints of dark, creamy Guinness ($6) and started with the amusingly monikered bubble & squeak ($2.95), which is actually two thick rounds of mashed potatoes studded with minced onion, carrots and other veggies, then griddle-fried until the creamy interior is steaming within a crisp golden-brown shell.

Another intriguing starter that’s rich enough to make a small plate seem larger than your eyes thought is the blue cheese cake ($6.95), a savory, salty “cheesecake” of herbed blue cheese and cream cheese baked in a ground-walnut crust.

Fish and chips ($9.95) is a long-time favorite here, and I’d argue that the Rover’s half-pound chunk of beautifully battered Icelandic cod ranks close to Louisville’s best.

The veggie gratin ($8.95) looks a bit Italian in its sizzling oval dish topped with tomato sauce and molten cheese, but the red sauce is no long-simmered “gravy” but a curried tomato chutney like the clipper ships used to bring back to the British Isles. Wherever its roots, this well-prepared mix of subtly smoky eggplant and Portobello slices with paper-thin yellow squash and zucchini rounds makes a fine dinner.

Even the Guinness and whiskeys could push the tab for our hearty dinner only up to $63, plus a $15 tip for impeccable service.