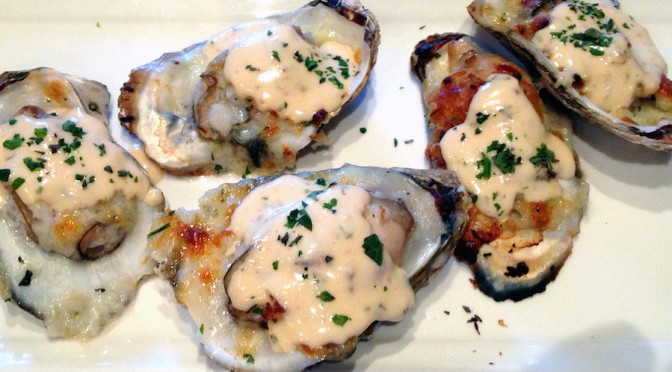 We stepped into the high-ceilinged room that had housed De La Torre’s for so many years. It looks … different. And very cool. There’s wood all around, and glass and some brass, too, and a bar so long it goes back to there, backed by an awe-inspiring wall of wines housed in high-tech argon gas dispensers that keep the vino fresh.

Okay, I know that noise is in. If you’re looking for a quiet, romantic dinner venue in Louisville’s trendy dining scene, I can point you to maybe three or four places where you’ll probably be able to hear yourself think, provided you don’t draw a set of neighbors who forgot to bring their indoor voices.

But hard edges and a happy crowd that packs the place nightly kicks LouVino up another volume notch, cranking it even beyond its Bardstown Road and NuLu neighbors. I whipped out my iThing’s “dBMeter” app and took a quick reading: 92, peaking to 98.

Whoa! In other words, LouVino’s ahm-bee-ahnce roars at the approximate level of a subway train, or a motorcycle revving up nearby.

Mary marched right up to the host’s station with a firm request: “Give us a quiet table.” This didn’t draw an eye roll, exactly, but the hard-working front-of-house chief was helpless. “I don’t think there are any,” she admitted.

How about the big tables in the front-window alcoves? Sorry, those are set aside for larger parties. (LouVino accepts reservations only for parties of five or more.)

She did her best, though, seating us at a relatively isolated table near the front, slightly removed from the throng. It helped a little. And to be fair, the roar of the crowd was about our only complaint, as we and our friends Steve and Mary Jane enjoyed everything we ordered from the restaurant’s selection of “small plates and big wines.”

De La Torres and its smaller sibling La Bodega closed last April 10, amid considerable mourning. New owners Chad and Lauren Coulter, pharmacists by profession who also own two metro Uptown Art shops, opened LouVino on July 29, just 3 1/2 months later, which in the restaurant business is pretty near record time for what amounted to a total rehab, including all the bureaucratic, inspection and permitting issues that typically drag on forever.

With Executive Chef Tavis Rockwell, formerly at Equus, and certified wine geek Danielle Greeson in front of the house, LouVino has built up a full head of steam on both the food and wine sides.

Rockwell’s selection of small plates is not overly long, but offers a good variety of about two dozen “snacks,” “land,” “aquatic,” “veggies” and “sweets” that range in price from $4 to $12 per, attractively priced for grazing and sharing.

The wine list takes the “S-N-O-B’ out of “W-I-N-E” by presenting its offerings in style groupings that require no skill at varietals or vintages: Do “floral, full, with a hint of spice,” “classic, full-bodied, broad-shouldered” or maybe “spicy, fruity and seductive” tickle your fancy? Go to those groups, or any of a dozen similar categories, to pick the glass or bottle that fits your style.

Or summon one of the three-glass tasting “flights.” two-ounce pours organized on wooden carriers so you can keep track. They’re named after local celebs – we chose “Pitino’s Pinots,” three Pinot Noirs for $11; and “Lewis & Clark,” three dry whites for $10, and enjoyed mixing and matching with our fare.

A warm pretzel ($7), house-baked and served warm, was puffy and tender, with a dark-brown crust like a Philly-style soft pretzel, dusted with coarse salt. It comes with your pick of tangy beer cheese or sweet port cheese.

A warm brussels sprouts salad ($7) was an earthy blend of smoky, halved sprouts – perhaps finished on the grill – stirred with chili corn salsa and tossed with cilantro lime vinaigrette, topped with a bouquet of fresh watercress.

The “chef’s snack of the day” this day consisted of an ironic take on macaroni and cheese with spicy Mexican chorizo.

Five fat grilled oysters ($10) were served on the half-shell and, apparently, saw just a quick kiss of the grill that left them essentially au naturel, not that there’s anything wrong with that. They were blanketed with a sharp cheddar sauce that was tasty but pretty much covered up the fresh oyster flavor.

We lucked out with the “Market mix” ($10), a daily chef’s creation using fresh local farmers’ market vegetables, that on this day was a beautifully presented napoleon, an artful stack of eggplant, summer squash, fresh tomatoes, maybe a Portobello and other good things, stacked and heated through, flavorfully decorated with a garlicky green aioli.

Another ironic “fusion” united a bite-size ration of Kentucky style (but not the Colonel’s) tender, crisply fried chicken ($9), garlicky mashed potatoes, Cheddar, pepper gravy in a Mexican-style taco. A mixed marriage to be sure, but it worked.

Our share of dinner for two, including two wine “flights,” rang up a pleasantly affordable $49.15, plus a $10 tip.