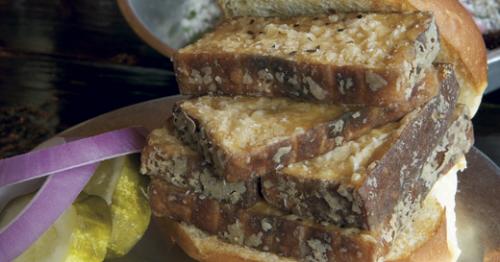 If you’re not convinced that the world is about to turn, consider this: Bill Clinton is a vegan now. Long a fanatical devotee of McDonald’s burgers bought by the sack, our ex-prez is now on a plant-based diet.

Quadruple bypass surgery no doubt argued in favor of a lifestyle change for Bubba, but he’s far from alone in the growing realm of celebrities who are turning to plant-based diets these days. Alicia Silverstone, Emily Deschanel, Natalie Portman and Ellen DeGeneres have all come out as vegans. Jessica Chastain and Woody Harrelson choose flora, not fauna, for their daily bread.

Call it vegan, vegetarian, plant-based or just moving away from the industrial agribusiness grid, meat-free dining seems to be trending, and this evolution is showing up on the Louisville dining scene. Vegetarians no longer need to bring angry attitudes to dinner, prepared to do battle to keep a burly chef from forcing pig meat or rare, bloody beef down their throats. With more plant-based options and a welcoming attitude, Louisville’s top chefs are adding interesting, creative non-meat options to their regular menus.

What’s driving the change? It’s not entirely age-related, according to local chefs, who see hipsters, middle-agers and even those still eligible for the children’s menu saying “No meat for me, please.” Though young diners may take health into account, more are driven by ethical considerations as basic as “If I wouldn’t eat my cat, I shouldn’t eat a pig” and concerns about inhumane feedlots, gestation crates or chicken batteries in the big-ag pipeline.

I’m old enough to remember when the Beatles and Elvis were new, and I’m often choosing the veggie option myself these days. Chefs make it easy with great choices like the frequently changing Farmer’s Plate at Lilly’s (when I dined there recently, the offering was an artfully plated feast of root veggie cakes, fluffy quinoa and creamed spinach on butternut squash veloute with crispy root-veggie chips). That’s a far cry from the traditional vegetarian offerings of grilled portobello, pasta primavera or three vegetable sides served together on a dinner plate.

“Vegetarian food has to be just as good as the rest, or people won’t order it,” says Dallas McGarity, chef at Theatre Square Marketplace. “If we don’t make people excited about it, they won’t want the dish.” McGarity’s black bean cakes are as toothsome and appealing as his similar looking lamb meatballs. “Our housemade gnocchi is vegetarian,” he says. “Roasted shiitaki, greens, caramelized onions, ricotta, cream sauce … it’s rich and hearty, vegetarian, not vegan, but it melts in your mouth. It’s a dish that surprises you.”

And the public responds, McGarity says: He introduced a crawfish risotto fritter and got a lot of positive reviews. He tried it as a vegetarian model with grape tomatoes and pesto in place of the critters, and people liked it even more.

Chef Charlie Reed at Henry’s Place expressed similar sentiments. He said he understands vegetarian impulses from family connections: His sister is vegetarian and so is his 23-year-old daughter, who declined meat-based baby food and has remained steadfast since. “If I didn’t have vegetarian food on my menu, I wouldn’t be a brother or a father,” he says with a laugh.

Reed says his asparagus salad is hugely popular, and he has offered a series of veggie mains, including a vegetable strudel stacked in 27 thin and colorful layers; then a pattypan squash stuffed with mascarpone; and later a Sicilian rotolini stuffed with ricotta. “Polenta or potatoes on the plate, asparagus, heirloom carrots, concasse tomatoes, and everything I do I cover up with butter, salt and pepper.” No, it’s not vegan, but he’ll do it vegan if you ask.

The sure sign of change, though, if not the apocalypse, is the growing demand for vegetarian options at barbecue restaurants.

“I couldn’t in good faith or business sense open a restaurant where such a large and growing segment of the dining population would feel completely left out,” says Ryan Rogers, who recently opened New Albany’s Feast BBQ and who offers a memorable barbecued tofu dish alongside his excellent ribs, pulled pork and brisket.

“I think it’s imperative for restaurants in today’s economy to embrace current dining movements and stick as close to the curve as possible,” Rogers says. “When I started planning Feast BBQ, I had a lot of people approach me and ask for a vegetarian option; this seemed quite queer to me initially, as I had already told them it was a classic no-frills barbecue restaurant. I really let the idea fester, though, and it became blatantly obvious that we had to have one.”

He and chef Chip Hartley decided to use tofu like any other protein. “It’s our job as chefs to enhance its flavor and let it speak for itself, not cover it up,” Rogers says. They hot-smoke extra-firm tofu one hour at 325 degrees, then dry it, slice it, dredge it, and run it through the deep fryer; add seasoning and salt, and it’s ready to serve. “Love it or hate it, the fact of the matter is that salty fried food tastes better,” he says.

“When we put the tofu on the menu, I was almost positive that it would be coming off within the first month, but we’ve actually been selling a ton of it. People love it, we often hear that it’s the best tofu many people have ever had, which is a huge compliment,” he says.

At Against the Grain brewery in Slugger Field, executive chef Reed Johnson has been cranking out his own vegan “wings,” Philly cheez steaks, banh mi sandwiches and tacos built primarily on seitan, a wheat-protein meat analogue. “I like for the menu to be well rounded,” he says. “So, no matter who is sitting at the table, there are options for everyone. Vegetarian, vegan, gluten-free, pork-laden, and everything from sinfully indulgent to heart-healthy options, I don’t want anyone to feel singled out or the need to be substituted for.

“The trend is not only hipster kids and young professionals,” Johnson adds. “I see as many 40- to 50-year-olds enjoying our vegetarian creations as I do young baby-toting couples and skinny-panted hipsters. It’s just good, responsible food, and I think people get on board for that reason.”