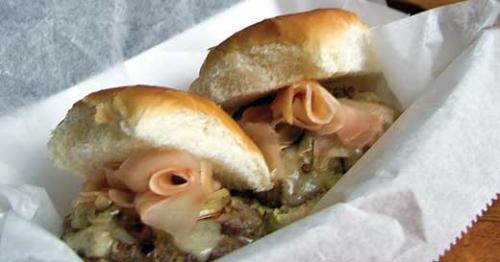 Poutine. Pronounce it “Poo-teen,” as the Canadian French do. Say it in a cardiologist’s office and hear the alarms go off. Utter it in a restaurant in Montreal, and you’ll be delivered a bowl of classic Quebeçois blue-collar fare.

And now you can have an offbeat version of poutine at the Holy Grale, a cozy little shrine to quality beer and international street-food snacks with a twist.

Lori Beck and Tyler Trotter, owners of Louisville Beer Store (746 E. Market St., 569-2337, www.louisvillebeerstore.com), opened Holy Grale just before Christmas in the Highlands space that recently housed Lonnie’s, but was originally built, sometime around the turn of the previous century, as a red-brick church.

The arched windows and lofty ceiling give away its ecclesiastical origins, but its welcoming sanctuary now echoes a different kind of prayer: “Please, may I have another pint of your delicious beer, and perhaps a dish of poutine?”

So what the heck is a poutine anyway? Simply put, the original is a bowl of crispy, twice-fried frites (that’s “french fries” to us), topped with a pile of tender fromage beaucronne (tangy cheddar-like chunks of cheese curd) melting in a thick, peppery brown sauce.

Holy Grale takes this French-Canadian treat and imparts an international spin by adding Spanish chorizo sausage to the spicy gravy. It starts with a sizable mound of fritjes (the Flemish word for frites, perhaps signaling the Grale’s stated inspiration by “the beer culture in Belgium and Holland”), then adds cheese shreds and a thick, spicy reddish gravy. It comes with plenty of tiny color-coded plastic forks for sharing.

It’s an impressive sight, enough so that Mary, spotting my dish on its way to the table, whispered, “Oh, God.” I don’t think she was praying. Mary and our friends Sarah and Kelly grabbed forks and the rush began. The hefty order of fritjes and poutine ($6.50) didn’t last long.

A bunch of other small plates went down the hatch right after it. The Grale’s variation on a kraut dog, for instance, replaces the traditional German cabbage with kim chee ($5). A ration of the fiery Korean cabbage treat, dotted with fiery hot sauce, topped a bacon-wrapped grilled beef dog. The kim chee and a dab of wasabi mayo was plenty to make the dog sit up and bark.

Grale wings ($5.50) hail from somewhere south of Buffalo. Replacing the familiar Louisiana hot sauce is a more exotic brew, sticky and spicy, made from a reduction of German Aventinus Eisbock beer with, we thought, touches of Asian spice. It’s served topped with chopped cilantro to extend the Asian vibe.

Our pal Sarah, who is a big fan of the Irish Rover’s full-size scotch eggs, made a beeline for Holy Grale’s mini scotch quail eggs ($6.50), which are tiny Kentucky quail eggs wrapped in spicy sausage and crisp panko breading, deep-fried crisp and crunchy, and served in a paper cone.

Interesting food, yes, but Holy Grale — the spelling reflects “ALE,” after all — features a diverse range of craft beer styles from around the world, frequently changing, carefully selected, and intelligently presented with concise but thorough descriptions and tasting notes.

We made our selections from the 20-tap draft beer list, although the extensive bottled beer list is worth noting as well.

I went straight to an unusual Italian beer, Birra del Borgo Castagnale from Borgorose ($7.50 for a 12-ounce glass), which is made with chestnuts and chestnut-smoked barley. Not as nutty as it sounds, it’s a smooth, elegant beer, not too heavy on the alcohol, with subtle hints of chestnuts in the aroma.

Samuel Adams Revolutionary Rye from Boston ($3 for a 5-ounce taste) adds a spicy touch of rye grain to the usual barley and gains from it in richness.

Schneider Organic Weisen-Edel Weisse from Kelheim, Germany ($3 for a 5-ounce taste) was full-bodied and hoppy, while Aecht Schenjkerla Helles from Bamberg, Germany ($6.75 for a pint) boasted just a hint of smoky character; it’s made in the same copper vats as the firm’s more familiar and much more assertively smoky Rauchbier.

The Holy Grale is fun. The food and beer are good. What more can you ask? How about affordability? The toll for two, after grazing through four small plates and about $20 worth of interesting artisanal draft beer, came to a reasonable $44.63, and quick, competent and friendly service earned a $10 tip.