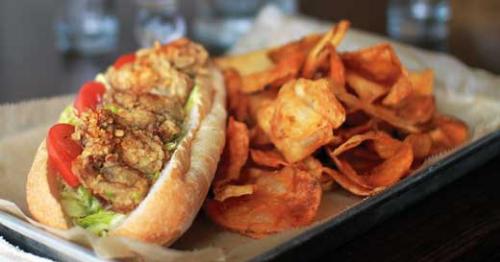 Amid all the recent angst about Louisville’s Whiskey Row on West Main Street and the arguments over whether these historic buildings are in danger of falling down, it’s instructive to step into Doc Crow’s impressive quarters.

Just a door or two west of the fenced-off Whiskey Row buildings at the center of the controversy, Doc Crow’s is housed in an 1870s-era whiskey warehouse and distillery that looks sturdy enough to withstand a tornado, or even a repeat performance by the New Madrid fault. Its walls are thick, its floors heavy wood, and the high exposed ceilings in the back rooms built with massive joists intended to support row after row of oaken barrels filled with Kentucky nectar.

Dilapidated? Hardly. It would take more than a few years of neglect to weaken this sturdy old building’s bones. With its beautiful renovation as Doc Crow’s, it appears good to go for another century or two.

Doc Crow’s, subtitled “Southern Smokehouse and Raw Bar,” bills its culinary niche as “the freshest flavors of the American South.” This Southern shtick might have come as a surprise to the sturdy German and Irish immigrants from the Northeast who populated Louisville during Whiskey Row’s heyday, making it a booming commercial center of mid-19th century America and keeping it in the Union during the Civil War.

What’s more, says the Filson club, Whiskey Row — originally the title for the entire stretch of Main Street from around First to Eighth streets — is home to one of the finest assemblages of cast-iron architecture in the United States, second only to New York City.

Regardless of whether our accent is Southern or not, Doc Crow’s indisputably offers up tempting and well-prepared Southern-style fare.

Brothers Steven and Michael Ton, who own Basa Vietnamese and opened 732 Social before that partnership broke up, own Doc Crow’s with Brett Davis, a wine geek extraordinaire with master sommelier certification, whose influence shows in the long, interesting and well-chosen wine, beer, bourbon and cocktail lists.

The restaurant extends a full city block back from Main Street through about six sections, including a brightly lit front room that could pass for an attractive barbecue joint; a long bar; a corridor with tables that enjoy a view of the open kitchen; a small, dark and cozy section with sturdy wood-and-leather booths; and two spacious dining rooms at the back.

The menu, like the venue, is divided into sections, each with its own mood. You can graze through a long list of starters, soups and salads, from $4 for seasoned pork rinds or a house salad or $5 for fried green tomatoes, up to $17 for a pound of peel-and-eat shrimp.

Po’ boys, the real New Orleans deal, are $9 to $12 depending on the filling. Smoked meats are $6 for pulled pork, beef brisket or turkey breast, to $22 for a full rack of St. Louis ribs or baby backs. Sandwiches are $7 to $13, and a brace of burgers will set you back from $9 to $18. At the high end is “The Bubba, a mountain of goodness,” featuring a half-pound steak burger and pulled pork and sliced beef brisket, dressed with fried green tomato, onion rings, a fried egg, cole slaw and barbecue sauce. Be my guest.

Looking for something a bit fancier? A half-dozen “Southern Specialties” range in price from $9 (for fried catfish) to $28 (for a 16-ounce cowboy rib eye with chipotle-herb butter).

On an early visit, I was delighted by an oyster po’boy ($9), loaded with crisply fried, sea-sweet fresh shellfish dressed with spicy rémoulade, on an impressive made-in-New Orleans loaf that was feather-light. I deferred a review at that early date, feeling Crow’s deserved a little settling-in time. Indeed, a flawless lunch on a more recent visit lifted my rating into the 90-point range.

A starter dish of fried oysters ($8) resembled a po’ boy without a bun. Eight small Chesapeake Bay oysters were sweet and fresh, and the tempura-style breading was light and crisp, with an unexpected whack of peppery heat.

Mary’s choice, beef brisket ($8), was an outstanding example of the smoker’s art, firm and beefy, gently ringed with smoky red and accented, not smothered, with smoke flavor. It came on Texas toast. She added a $3 side of collard greens that got two thumbs up.

Doc Crow’s version of local favorite shrimp and grits ($18) was fine. About a dozen medium-size shell-free shrimp, perfectly cooked, firm but not rubbery, topped a bowl of comforting cheddar-laced grits sauced with a light, smoky tomato “gravy.” A side of green beans ($3) was impressive, not soggy country-style but green and fresh, fully cooked but still crisp-tender, flavored with bits of onion, tomato and crisp bacon.

Dessert, a blackberry crumble, was simple and pristine. A small ramekin bore a steaming portion of small, intensely flavored blackberries swimming in their tart, thin syrup and topped with the crisp pastry crumbles that give this dish its name.

A filling lunch came to $47.70, which might seem a bit spendy for lunch, but is a mighty reasonable toll for the dinner it really was. Courteous service, attentive but never intrusive, earned a $10 tip.