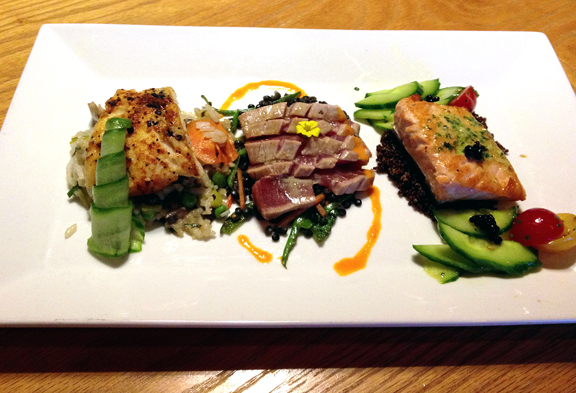 How do you like your cornbread? Like Scarlett O’Hara, most Southern folk don’t give a damn for sweet cornbread. North of the Mason-Dixon, however, cornbread without a touch of sweetness seems just plain weird.

This topic came to mind the other day at Napa River Grill, where we were offered iron mini-skillets loaded with domed rounds of golden-brown cornbread topped with balls of soft butter. It was good cornbread indeed, crunchy on the surface, crumbly within, coarse-grained and sweet, sweet, sweet. You could put this on the dessert menu and call it corn cake.

There was no Southern tradition here, except maybe for the iron skillet. But then, Louisville is a border town, so we can have it both ways. And Napa River Grill, as the name implies, represents California’s wine country in its style.

The restaurant has recently changed co-owners, with J.D. Rothberg having sold his share to fast-food magnate (and one-time University of Louisville and pro hoops star) Ulysses Lee “Junior” Bridgeman, whose corporation owns over 160 Wendy’s properties and about 120 Chili’s restaurants.

This is Bridgeman’s first upscale property, and he’s wisely left this winning eatery pretty much alone, although I do wonder if the California style has been diluted just a bit. The wine list contains plenty of options from France and Australia now, with a good selection in the $20s and $30s and by-the-glass options from $6.50 to $15. (High rollers can still drop a bundle on Napa trophies, though.)

The Pacific Rim menu might be a bit more global now, adding regional dishes like Prince Edward Island mussels ($10.95), bruschetta ($8.95) and sun-dried tomato hummus ($9.95) to the appetizers list; and Japanese-flavored sea bass ($31.95), a Mediterranean-style pan-roasted chicken ($19.95) and a Southern-style grilled pork chop ($23.95) to the entrees.

After whetting our palates with that sweet, sweet cornbread, we moved on to a seasonal salad of mixed Grateful Greens lettuces, shredded carrots and red onions, thin-sliced Granny Smith apple and sunflower seeds in a lemon-pepper vinaigrette. I would have liked a little more excitement for its $10.95 tag. A Caesar ($7.95) was more interesting, with crisp, cool romaine chunks and herbed croutons in a creamy dressing, served in an edible bowl fashioned from melted Parmesan.

Pad Thai ($19.95), chosen from the lunch menu as a vegetarian alternative, was spicy and fine, Asian rice noodles tossed with sliced peppers and onions, chopped peanuts, scrambled egg, lime and cilantro. The 9-ounce center-cut filet ($35.95) was thick-cut and served medium-rare as ordered, full flavored and firm. (“We work with area farmers and purveyors to source locally grown and produced products,” the menu says.)

Red Rock Terrace bread pudding ($8.95), a towering vertical dessert the shape of a soup can, was beautifully presented and wasn’t bad, although the idea of basing it on croissants, an appealing concept, made for a rather heavy end to a hearty meal. Still, we managed to finish it all.