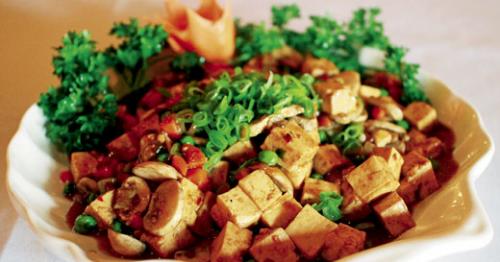 We rolled up to our destination in the gathering darkness, and I found a parking spot at the curb out front. I turned, looked up, and … wow! This looks just like our old neighborhood in New York City! It’s a sturdy, three-story block of brick, not brownstone — visualize Queens, not Greenwich Village — with cozy lights in apartment windows on the upper floors, and busy storefronts opening on the street: a meat market, an Italian gelato shop and a family-run Chinese eatery.

OK, it’s not quite the same. There’s not much traffic, not a yellow cab in sight, and the street is litter-free. There’s not a speck of graffiti around, and no heavy burglar bars pulled down over dark shop windows. Then I turned and looked the other way and saw rows of modern subdivision colonials stacked into a slightly too orderly planned urban-look streetscape. Oh, yeah. We’re in Norton Commons, aren’t we?

Still, it made me feel good for a minute there. And the simple Chinese delights within Tea Station made us feel pretty good, too, warming our hearts and tummies on a chilly night.

Tea Station, which bills itself as a “Chinese bistro,” represents an Asian genre that was once common in our town but has largely disappeared from view: a quality Chinese restaurant run by a friendly Chinese family that offers a good selection of Chinese and Chinese-American fare in an attractive environment where you are more likely to dine in with china, flatware and cloth napkins than to grab Styrofoam boxes for takeout.

Chef Paul Yang, rather, limits his bill of fare to the gently adapted Sichuanese and other regional dishes like those that Louisville considered cutting-edge when it first arrived here back in the ’70s and ’80s. But Yang doesn’t need to brag about culinary credentials; his craft shows in every dish.

The menu isn’t quite as extensive as the oversize sheets at most of the city’s quick-service chopsticks houses, but you’ve still got about 100 Chinese options plus a dozen well-made sushi rolls. About 30 appetizers, soups and salads range in price from $1.50 (for spring rolls, egg rolls or a cup of egg drop, won ton or hot-and-sour soup) to $10.95 (for a truly retro delight, the Volcano Tray for two, a platter of crunchy, munchy starters that evokes the familiar Pu Pu Platter of days gone by).

Main dishes are categorized under poultry, beef, vegetables, and rice and noodles (everything under $10), seafood ($10.75-$14.95), and about 35 items highlighted as “chef’s specialties,” which range from $8.95 (for crispy calamari or a teriyaki scallop bowl) to $19.95 (for a lavish seafood combination plate that includes shrimp, crab, scallops, lobster and a harvest of stir-fried veggies).

Many of the dishes, as noted, wouldn’t be unfamiliar to a visiting Marty McFly: Sizzling Happy Family, bourbon fried chicken or orange beef (all $11.95), honey-seared shrimp ($13.95) or several varieties of fried rice ($10.95). Grandma (or you) might enjoy moo goo gai pan, cashew chicken, almond chicken or sweet-and-sour pork (all $8.95).

The wine and beer lists are short, mostly mass-market, but affordable. We went with an oversize bottle of Orion Japanese beer big enough for two ($6).

We started with a pair of egg rolls ($3), shatteringly crisp-fried won-ton pastry, sizzling if not quite grease-free, wrapped around rice noodles, shredded carrots and veggies, served with a dab of sinus-clearing Chinese mustard and a sweet-hot spicy ketchup.

Mongolian lamb ($12.95) offered bite-size chunks of boneless lamb that were stir-fried tender and savory with julienne onions and green peppers with chili peppers on a bed of crisp rice sticks. At 2 out of 5 on the heat scale, it was warming but short of fiery.

We saved the fire for bean curd Szechuan style ($7.95), which definitely generated a sweat with endorphin-producing 4-star heat. A bowl-full of bite-size tofu cubes were stir-fried with peas and diced carrots that I suspect came from a frozen bag, but they were handled well, just heated through in a dark brown, sweet-hot sauce that kept me coming back for more.