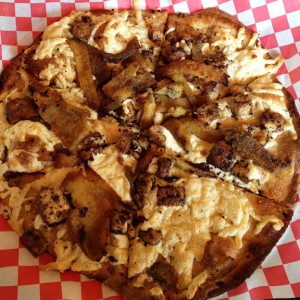 Ahh, pizza! I’ve long argued that this all-American Italian treat is one of nature’s most nearly perfect foods. Salty, crisp, gooey, dripping with delicious cheese and loaded with all manner of goodies, it’s a decadent snack.

And yet, if you bring just a bit of moderation to the party, taking a ration of healthy veggie toppings to ameliorate the meat lovers’ delights – and maybe skipping the extra cheese – you can turn a sizzling pie into a meal that’s arguably … well … if not actually good for you, at least not so bad. And that’s something, right?

Pizza is popular. I can name more than 50 local, independent pizzerias in town, without even counting restaurants that include pizza on the menu without specializing, like Cafe Classico, Cafe Lou Lou and Garage Bar, for example, not to mention (yeah, let’s not) the bland facsimiles of pizza vended by the corporate chains.

It doesn’t take a genius to perceive the connection between intense clusters of pizzerias around the city’s most prominent nightlife zones, Baxter-Bardstown and St. Matthews. Pizza is, after all, an even better antidote to a night on the town than the traditional White Castle burger.

When you’re in a hurry, you won’t find a faster pizza – at least not a faster good pizza – than you’ll get at Uncle Maddio’s Pizza Joint, conveniently located on the Bardstown strip at Grinstead Drive, in the retail mini-strip that replaced the old green John Riley Auto Service building.

I won’t say Maddio’s builds the best pizza in town, but it’s far from the worst. Locavores will praise its commitment to natural beef and free-range chicken, and the vegetarians and vegans among the strip’s hipster crowd will award it extra points for including such niceties as tofu and vegan “cheez” among the offerings.

But where Maddio’s really stands out in the fresh-service concept. This 30-unit Atlanta-based chain brings to bear the same service model that you’ll find in fresh burrito shops like Qdoba, Moe’s, Salsaritas and Nulu’s popular indie, Taco Punk. Enter, walk through the line, and the friendly folks behind the counter will assemble a pizza to your order from bins of fresh prepped ingredients, then give it a run through a conveyor oven that brings it to sizzling heat within moments after you sit down.

Prices have gone up a buck or so since it opened last year, but it’s still quite fair at $7.99 for an individual pie, $13.49 for medium or $18.49 for extra large. Three dough choices, six sauce options, eight cheeses and more than three dozen toppings give you plenty to work with to come up with the pie that’s just for you. There’s also a good choice of salads and paninis if you’re not in a pizza mood.

An individual traditional-crust pizza topped with herb pesto sauce, grilled Angus steak, goat cheese and baby spinach was very good, although the sauce was a little pungent with dried herbs, and the bits of steak, already cooked before their ride through the oven, came out crispy and well-done (but still flavorful). Just to push the envelope, we also tried a full-bore vegan pie with crispy fried eggplant and tofu dice and Daiya vegan cheese, with garlic olive oil on a whole-wheat crust. It was surprisingly good, and if the tapioca-based “cheez” wasn’t quite mozzarella, it came remarkably close, with a virtuous calorie count.