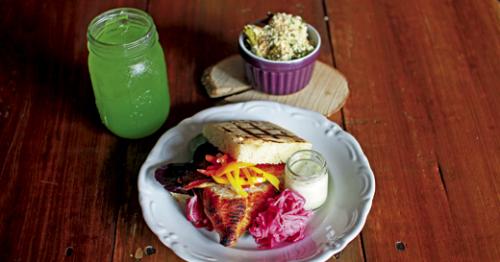 Thomas Jefferson said it best: Government should “make no law respecting an establishment of religion, or prohibiting the free exercise thereof, thus building a wall of separation between Church & State.” This great American tradition, enshrined in the Constitution, would seem to protect us from governmental intrusion in such deeply personal matters as, for example, enjoying an adult beverage with brunch on Sundays.

So why did it take more than two centuries for us to be able to enjoy the simple pleasure of a bloody mary with a morning repast in Louisville?

I don’t know. But I am delighted, at long last, to raise a hefty mason jar of Hillbilly Tea’s finest tea-infused “moonshine”-based Smokin’ Mary to salute our city parents for getting with the program, even if it took them 224 years to do it.

This enlightened legislation prompted us to head for Hillbilly Tea to enjoy a drink – and some nibbles from its Sunday “bruncheon” menu – well before the Sabbath sun crossed the yardarm.

Hillbilly Tea brings together a cup of hillbilly, a healthy heap of hipster and a pinch of fun to serve up an international blend of country cooking – both the Old Country and the New – with locavore meats and produce and plenty of tongue-in-cheek Appalachian shtick.

Nothing on the lunch menu (other than possibly a bottle of wine) will set you back more than 10 bucks, and Sunday “bruncheon” maxes out at $12 (for a Scotch egg, “Hillbilly Brunch” egg-and-pancake platter or a hearty repast of egg-topped “moonshine pork”).

We burned off a few calories clambering up the 22 steep, ancient steps to Hillbilly Tea’s expansive loft dining room, then enjoyed a hearty brunch that put them back.

White bean and sage fritters ($5) were crunchy, golden brown fried rounds of subtly herb-scented bean puree, and dark mahogany crispy chicken liver bites ($6) were admirably grease-free, too. But the former could have used a little salt, and the latter required it. We hailed a server and liberated S&P from the kitchen.

Bright yellow scrambled eggs brought free-range color and flavor to the “Hillbilly scramble” ($8), but I’d have liked them fluffier. A “smashed” red potato provided starch, and I’d have liked my slice of grilled focaccia left on the grill a little longer. The grilled catfish sandwich ($7) was built on delicious smoked-fish fillets. A side of fresh kale was bright-green and not cooked into submission.