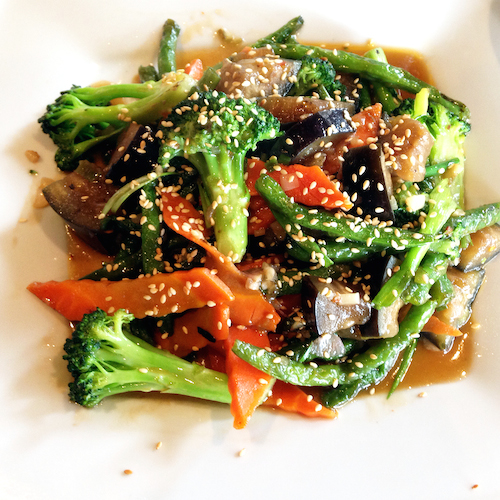 Does the Buddha daydream?

As the ancient story is told, more than 2,500 years ago when Siddharta Gautama experienced his awakening, his six years of meditation and study provided him with sudden vast insight into the meaning of life. Thus he became the Buddha, “The Awakened One,” and one of the world’s great religious traditions was born.

So meditate me this: Does an Awakened One sleep? Probably not. What would be the point? But surely the Buddha daydreams, for what is daydreaming, after all, but random meditation?

Buddha’s Daydream! It’s a Zen koan, and it’s a dish at Saigon Cafe in St. Matthews. And it’s a good dish, too, a platter full of bright, colorful stir-fried veggies – eggplant, broccoli, green beans and carrots – plus tofu in a gently piquant clear sauce, sprinkled with sesame seeds and served with rice.

Unfortunately, the tofu disappeared. Perhaps it attained nirvana on its way to our table?

I had looked forward to getting back to Saigon Cafe. I was impressed with dinner there about a year ago, not long after it changed its name from Lemongrass under, I believe, new management.

Unfortunately, our experience this time was a bit more mixed. Don’t get me wrong: there’s plenty to like. The service is friendly and quick, the shopping center space just off Shelbyville Road across from Trinity High School is attractive and warm, and when the dishes are good, they can be very good. The missing tofu, however, proved to be part of a pattern of slip-ups that, while not really major, makes me want to meditate a little before giving this spot my most enthusiastic praise.

There appear to be close to 100 dishes on the menu, including one page each for a few rather basic Thai and Chinese-American dishes; all the rest is Vietnamese. Pricing is mostly under $10, with a few more elaborate seafood dishes going for a couple of bucks more. Adult beverages are available in the form of short wine and beer lists that are affordably priced, but don’t look for craft beer or offbeat wines here.

Summer rolls ($3.75 for two) wrapped in translucent rice paper were okay, but we got another signal that something in the kitchen wasn’t going quite right when we summoned an order of salt-and-pepper calamari ($7.50) to start.

On a prior visit, this bountiful dish was a delight: tender bits of squid cloaked in a crisp, feather-light tempura-style batter. This time, it was still a generous portion, but the squid was tough and its thick, bready batter seemed closer to Long John Silver’s except for its odd bright-yellow color. Would the brown sauce that came alongside help? Umm. I’m generally familiar with Vietnamese flavors, but this chunky, thin sauce gave off a funky aroma that made us more than wary. It went un-touched.

Pho Tai ($8.75), the traditional Vietnamese beef soup, was okay but didn’t pack much flavor punch. A shot of Sriracha “rooster” sauce maybe? Umm again. The bottles, which apparently live on the tables, had faded from their customary bright, spicy red to a paler orange hue that wasn’t too encouraging.

All the veggies in the aforementioned Buddha’s Daydream ($8.95) were good, and properly stir-fried crisp-tender. I did miss the AWOL tofu though. Another Vietnamese dish, garlic beef with asparagus ($10.95) was straightforward.