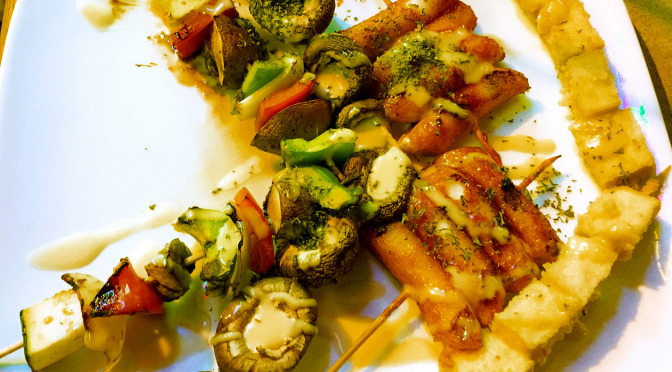 I slurped a mouthful of fat white udon noodles. Slurping noodles is entirely appropriate in Japanese culture, you know.

I savored the aromatic brown broth, took a deep breath and sighed, full of happy.

Mary gave me a funny look. “I don’t think rap is your thing.”

Well, to be honest, Mary knows what “umami” means, and perhaps you do, too. It has become a buzz word for foodies. But because it fits so well with the flavors at Barcode 1758, successor eatery to the late, lamented Maido in Clifton, it’s worth a quick re-take.

First, class, let’s recall that 90 percent of what we think is taste actually occurs in our nose. Our smellers may be weak and wimpy in comparison with the nasal nuances that our dog and cat friends can make out, but scent still beats heck out of our taste buds, which can detect only four distinct flavors: Sweet, sour, salty and bitter.

Hold on just a minute, yell the Japanese! Their tradition adds a fifth flavor, umami; and upon reflection – and tasting – Western science is starting to agree. Umami is as easy to perceive yet as full of nuance as a haiku, and it’s as difficult to comprehend as a zen koan.

My best shot at defining this undefinable concept is “meaty.” No, umami doesn’t taste like meat. But when you build umami into a dish, it fills a meat-shaped space.

Barcode 1758’s veggie udon noodles pack in the umami, full and rich, bathing those tender wheat noodles in a broth that’s dark, brown and full-flavored. It’s savory, yes, and “meaty” too, but it gets there with soy sauce plus browned vegetables, I’d guess, maybe a little tomato. These are the goodies of which umami is made, with browning perhaps the No. 1 trick to get that meaty thing going where no animal flesh has been.

It’s a pleasure to see Barcode 1758 picking up steam in its attractive Clifton location, a buzzing block at the inner end of Frankfort Avenue, with Silver Dollar, North End Cafe, the recently renovated Hilltop Tavern and a possible coming upscale eatery in the historic Hilltop Theater all within a biscuit’s throw.

Maido reigned as a favorite sushi spot for close to a decade after its 2004 opening, applauded not only for its Osaka-style izakaya small-plates cuisine but also for its thoughtful beverage program, its casually funky venue and attractive, shady patio.

Family discord eventually shattered the dream, though. Co-owner Toki Masabuchi went on to start another popular Japanese spot, Dragon King’s Daughter, in the Highlands in 2009 and later another branch in New Albany. Maido kept on for a while, staggered, seemed to bounce back when Toki returned and sold it, but finally sputtered out when the new owner-chef, Si Won Yu, died unexpectedly.

The building stood vacant for quite a while, but lighted up again last spring when the owners of nearby Osaka (2039 Frankfort Ave.) teamed with Song Kim, owner of Bendoya Sushi Bar (217 S. Fifth St.), to open Barcode 1758. They’ve considerably redone the interior, building a Japanese industrial-tech vibe with a bar that runs the length of the darkened room, with a gigantic mural-size lighted image of downtown Tokyo at night dominating the decor.

?The menu is long and multi-ethnic, focusing particularly on sushi, small plates and an extensive selection of skewers that go far beyond chicken yakitori, with a distinct Korean element added to the Japanese flavors.

With my sister, Amy, in tow, we started with a couple of well-made sushi rolls: The Manhattan roll ($7.95), avocado and passable but not-too-fresh tuna (pro-tip: avoid ordering raw fish on Mondays) and AAC roll ($4.95), nicely mixing up flavor and texture with avocado, asparagus and cucumber in the roll.

Veggie gyoza ($4.95), the Japanese answer to Chinese pot-stickers, were flavorful and won applause for the unexpected texture contributed by al dente edamame in the mix, but these stickers didn’t stick. A little wok-caramelized crunch would have been welcome.

Agedashi tofu ($5.95), a traditional Japanese appetizer, consisted of cubes of deep-fried tofu are served in a miso sauce and garnished with lettuce, maybe a little seaweed and bonito flakes.

Asian veggie udon ($9.95), as mentioned, was generous bowl of umami, tender white udon wheat noodles in a broth that makes you ask for more..

Red snapper katsu don ($12.95) was excellent, a boneless fillet of tender, mild fish cloaked in a crunchy coating and served over rice with a sweet brown sauce that would have made us even more happy if it had been a bit less sweet.

With a Falls City draft beer ($4.50) and a glass of Kendall-Jackson Chardonnay ($7.95), dinner for three came to $74.31, with a tip rounded up from 20 percent for friendly, unobtrusive and prompt service.