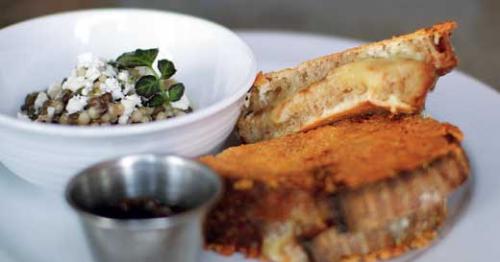 The buzzing gallery and nightspot zone along East Market Street that the PR-meisters wish we would call “NuLu” has become so crowded lately that, as Yogi said, nobody goes there anymore. Of course, this is not true. In fact, thousands of people joyously cram the nabe in pursuit of art and good things to eat and drink, and doubly so on weekend evenings.

Not only are you likely to encounter crowds, but you’re likely to find noise any evening in oh, all right, NuLu. With all those people and all that booze packed into environs that almost uniformly boast undraped tables, hard surfaces and exposed-brick walls, decibel levels can easily rocket to annoying levels.

But let’s face it, noise is in these days. I’m almost convinced that some of these places actually crank up the volume to foster that image. Are you listening, Silver Dollar? Can you hear me? But sometimes a person just wants good food, good drink and a little quiet conversation. When that’s your goal, here’s a secret: Try some of these hot spots for lunch on a weekday, and you may find the usual roar toned down to a more mellow rumble.

Mary and I dropped in on Rye for lunch on a Tuesday recently and practically had the place to ourselves. We could hear the server, we could converse. Even the garage-rock sounds of Black Rebel Motorcycle Club’s “Lien on Your Dreams” had been turned down to lounge-music levels to suit the almost empty room.

Rye’s lunch menu is cut back a bit from its dinner menu, but it offers much of the same creative cuisine for a few dollars less. Taking good advantage of local and regional meats and produce, Morris puts together a bill of fare that changes almost daily, but the selections on the day of our visit seemed typical. About a dozen appetizing dishes were evenly divided between “small plates” (from $10 for broccoli rabe on toast with ricotta and a soft-boiled egg or cranberry bean and farro minestrone to $13 for a spring artichoke and cheese tart) and “main eats” (from $12 for a Rye burger with egg and cheddar, pickles and fries) to $16 (for a hanger steak and eggs or salmon gravlax with poached eggs). A la carte sides are $6 to $8, and you may order a meat plate or cheese plate for $5 per item or $12 for your choice of three.

Come back for dinner when you’re feeling more sociable, and you’ll find a similar, slightly more extensive menu with main-dish prices kicked up to the $22-$26 range. A long drinks list covers a broad range of spirits, with bourbon selections outnumbering the namesake rye by a 60-40 margin. Never mind, there’s plenty to drink, although some of the lower-end items on the wine list carry disturbing markups.

We didn’t let the luncheon hour deter us from dining well, working through mains and sides to make a filling midday meal. Saucisson Sec ($12, “dry sausage”) turned out to be a sandwich. Thuringer-style sausage rounds (that our server initially said were house-made but later said came from Germany) were served on a loaded baguette (that the server told us was house-made but that looked a hell of a lot like Blue Dog to me, not that there’s anything wrong with that). It was served with a seasonal aioli with ramps, muffuletta-style olive relish and a couple spears of deceptively hot-and-spicy pickle.

The grilled cheese sandwich ($12), an upscale variation on the traditional lunch-counter favorite, hit the spot. A robust white cheese (the server said it was Kenny’s Kentucky Cheddar) flowed molten from between thick slices of toast that had been thinly breaded, possibly with a bit of cheese, and grilled as crunchy as a croque monsieur. The sides were fine: sweet-tart onion marmalade and a memorable Israeli couscous salad.

Sides of pan-roasted asparagus with tartar-like sauce gribiche ($8) and herbed latkes ($6) were OK, but some of the asparagus was stringy, and the latkes weren’t long on texture. They were plenty good enough to finish, though.

With strong, fresh iced tea – I generally hold the booze until the sun’s over the yardarm – a decent lunch for two came to $42.40, and we rounded a 20 percent tip up to 10 bucks.