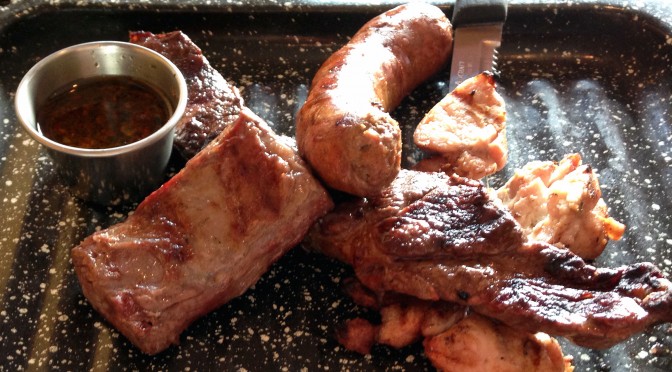 The name of this dish (literally “The Grill Platter”) offers the Spanish-impaired student a double challenge, as it mashes up two of the toughest consonant pairs in Español: double-r and double-l.

To get it right, you’ve got to roll the “rr” and soften the “ll” into a “y” (or a “zh” for an Argentine accent), coming out with something like “La Parrrreezhada.” This will probably impress the staff or maybe make them chuckle; but guess what! You can just say it the way it’s spelled in English, and they’ll still know exactly what you want.

And you’ll get the joy of as truly Argentine a culinary experience as you’re going to find in this town. The Parrrreezhada, an edible extravaganza, brings four different parts of grilled cow on a sizzling charcoal grill that sits right on your table. It’s Palermo Viejo’s house specialty, and surely one of this favorite Highlands eatery’s best-selling platos principales. Er, entrees.

After all, if it’s meat you want, it’s hard to beat the cuisine of Argentina, where caballeros can sing “Home on the Range,” or the Spanish equivalent, with just as much nostalgia as our Texas cowboys. Chef Frank Elbl’s bill of fare at Palermo Viejo will meat all your meat needs with Latin flair, featuring well over a dozen beef main courses from $13 (for Milanesa de Carne, a.k.a. Argentine chicken-fried steak) to $28 (for a Parillada Completa for one, adding pork and chicken to the all-beef Parillada option).

But here’s a surprise, and, I think, an evolutionary development for Palermo Viejo: This temple to all things beefy is also veggie-friendly now. Three of the mains, six of the appetizers and all the sides are marked with a “Vegetarian” icon to indicate their meat-free status.

But wait! There’s more! In a seasonal offering that even obligate carnivores may find fascinating, the kitchen is sourcing a variety of freshly picked summer veggies from an employee’s Southern Indiana farm to make excellent daily from-the-garden specials.

We decided to have it both ways on a recent visit, sharing both a meatful Parrillada ($20) and a meat-free special from the farm, veggie pasta ($16).

First, though, along with a basket of light, crusty Italian-style bread and whipped butter, we tucked into a farm-fresh Caprese salad ($9). Served on a wooden dish, it was made from four thick rounds of alternating red and orange heirloom tomatoes topped with thick half-moons of creamy fresh mozzarella, drizzled with a balsamic vinaigrette and fresh basil chiffonade. The dark, sweet balsamic made an offbeat variation on the classic simplicity of Caprese, but this did not keep me from cleaning my plate.

The Parrillada’s four grilled meats were house-made chorizo, short ribs and flank steak and a couple of sweetbreads, with Argentina’s trademark green chimichurri sauce served alongside.

The chorizo was Spanish style, not the crumbly Mexican chorizo that oozes suspicious red grease. This was about the size of a bratwurst, a firm, dense cylinder of finely ground beef and bold but not fiery spices.

The short ribs had been pared off the bone, leaving a thin rectangular strip of grilled meat, on the tough side but full of flavor. The flank steak, grilled to a char on the outside but still pink within, kicked the beefy flavor up yet another notch.

Yes, sweetbreads are the calf’s thymus gland. If you eat meat at all, you should try to get over this. Palermo Viejo simply grills them, with no breading, sauce or other goop, just pure puffy clouds of – wait for it – organ meat! Three oval chunks were delicate and smooth, with a luxurious mouthfeel and meaty flavor. The texture is something like liver pate, but there’s no funky organ-meat taste.

The chimichurri sauce was the real deal, a simple mix of fresh-chopped parsley mixed in olive oil and vinegar with loads of garlic and herbs. A side order of fries a la Provenzal were addictive, thin-cut and crisp, tossed with chopped garlic and parsley that echoed the flavors of the chimichurri.

So that’s the meat. Yeah! But the non-meat was worthy, too. The day’s pasta dish was built on a base of perfect house-made ribbon pasta, billed as linguine but about as wide as pappardelle, tender yet al dente, a challenge with fresh pasta. It bore a bounty of farm veggies including crisp-tender rounds of sliced summer squash and quartered zucchini, slices of juicy grape tomatoes, simply dressed with olive oil and topped with grated cheese. A side dish of tender, garlic-sprinkled asparagus added an exclamation point to the veggie exultation.

Allamand Malbec ($24), one of the least pricey Malbecs on the affordable, all-Argentine wine list, was grapey but tart, a good match with both the meat and veggies. With the wine, a simple dessert of silken flan and dulce de leche ($5.50) and strong, fresh coffee ($2), dinner for two came to $81.09, and server Laurel’s friendly but not overbearing attention earned a $20 tip.