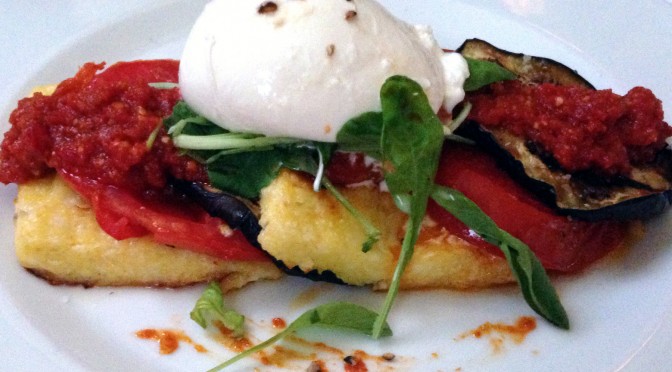 Jack Fry’s! The very name of this Highlands landmark makes many of us smile. Fry’s feels like an enduring landmark, a piece of Louisville culinary history that always stays the same. Which is kind of funny when you consider that it has changed both owner and chef since my last review.

As it happens, this ship of foods has stayed its stately course through the recent changes: When owner Susan Seiller moved on in 2008, she passed the reins on to Stephanie J. Meeks, who had worked her way up from host to manager over a dozen years and knew the place inside out.

When longtime Chef Shawn Ward (who kindled Louisville’s affection for Low Country Carolina shrimp and grits back in the ’90s) moved to join the all-star team that’s re-making The Brewery this past April, he simply turned over the toque to McClain Brown, who’d been working at Ward’s side for six years and was executive sous since 2012.

But look back a lot further in time, and while Jack Fry’s may still look much as it did in the 1930s, we can’t credibly claim that it has stayed the same. Back in our parents’ time, or maybe our grandparents’ time; back when Hunter S. Thompson and Sue Grafton were growing up in the neighborhood, it was a different place, and Jack Fry’s was a very different kind of neighborhood saloon.

The original Jack Fry, the namesake and owner, started a neighborhood tavern upon the repeal of Prohibition in 1933. If I had to guess, I’d suspect that it might have had a more shadowy existence before Repeal, as Mr. Fry, by all accounts, was only loosely guided by the strictures of the law. A huge fan of the ponies, the prize fights and the bottle, Jack was purportedly the man to see if you wanted to get down a bet or acquire a six-pack without proper ID.

But that was then, and this is now. The neighborhood, having slipped some from its original status as one of Louisville’s finest 19th century suburbs, was re-gentrifying by the time Jack retired in 1972. After some years as Por Que No Mexican, new owners restored Mr. Fry’s moniker in 1982.

They sought to retain its classic urban tavern vibe, a commitment that remains unchanged to this day in its dusky walls and old Louisville photos. But you sure can’t get down a bet or buy an illicit six-pack here any more.

Old Jack Fry would probably be saddened to know of this, and I expect he’d be horrified to know that for dinner for two can easily take you north of 100 smackers now, with entrees alone ranging from the $20s through the upper $30s. (The lunch menu is lighter on the wallet, although it’s hardly cheap eats at $9 to $16.)
?Nevertheless, the food, the mood and the style, not to mention its worthy bar and thoughtful adult beverage options, make it all worthwhile. It’s one of the city’s top spots, and it seems likely to stay that way.

We dropped in for dinner recently with our friends Pat and Don, and left quite happy. From crusty, warm breads with herbed butter to rich, indulgent desserts at the end, we found very little to quibble about.

Salads were carefully crafted and appetizing, both the Stilton salad ($8) with crisp romaine, chopped walnuts and crumbled blue Stilton cheese in a tart-sweet cider vinaigrette, and the salt-roasted beet salad ($11) featuring fresh arugula and thick-sliced roasted golden beets with goat cheese and spicy pecans in a sherry-scented dressing.

A pork chop ($29), a 2-inch-thick, bone-on chop, was exceptional. It was flavorful but firm, not “slimed” industrial meat but, our server said, sourced from a nearby, unnamed, Indiana farm. It was coated, not breaded, with a crunchy mix of crumbs and sage. We were a little less happy with the accompaniments, a sort of hearty hash of diced, browned new potatoes, asparagus, and shiitake mushrooms and fatty bacon. A simpler, more summery presentation of those same items cooked with less intervention would have suited the season and our palates.

A Polenta Pave ($26) made much better use of veggies. Thin layers of tomato, roasted eggplant and sun-dried tomato jam were stacked on slabs of smooth yellow-corn polenta, all topped with an oval of creamy, rich burrata cheese.

One popular dish that may go all the way back in Fry’s timeline is Jack’s burger ($14), but i’ll bet Jack’s original didn’t come built on a brioche bun with caramelized onions. I like this way better.

Yes, we were too full for dessert, and yes, we did polish off creme caramel and blackberry cobbler (both $8) just the same.

With a blonde French Negroni cocktail ($11), our share of dinner for two came as close to an even $100 as made no difference, making it easy to calculate a fully earned 20 percent tip.