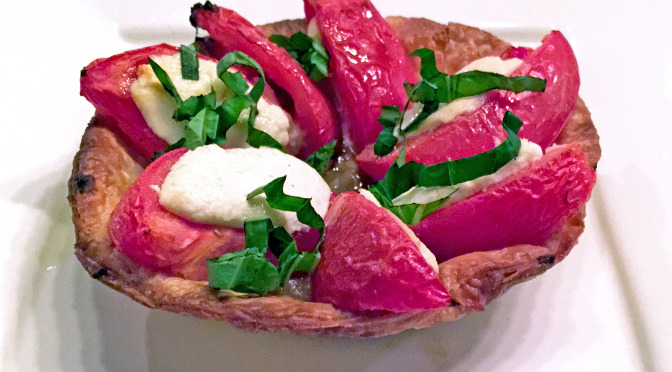 “Music hath charms to soothe the savage breast.” Or maybe “beast.” Everybody thinks the Bard wrote this, but it was actually William Congreve, a decidedly lesser poet who lived a century or so after Bill Shakspear trod the boards.

My breast was savage, and so was my beast, the other day. I was crabby. I’ll admit it. And I showed few signs of getting better. What was gnawing at my liver? Let me count the ways. (The Bard really did say that.)

First, I was getting over a nasty infection and gobbling two flavors of antibiotics. One hyped me up as if I had chugged a half-dozen cups of coffee, with the attendant impulse to chatter. The other precluded beverage alcohol.

A delightful evening with friends at Brasserie Provence, a place that I really liked last time, was on the calendar, and I was aching to go. Then it turned out that Mary had a conflicting meeting and couldn’t come along.

What to do? No bride to keep me company. I didn’t feel great. No appetite for meat, poultry, fish. Didn’t dare order an adult beverage to boost my sagging spirit. This was not a joke. We’re not talking about “do not drive or use power tools or heavy machinery” here, but an immediate and dire risk of projectile regurgitation. No adult beverages: Not. One. Drop.

TMI? Fine! Let’s move on. A food critic has to be fair, that’s the prime directive. Mood matters. Could I possibly dredge a fair and balanced review out of a visit when I faced strict limitations, not to mention feeling like koala roadkill on a Tasmanian back road?

?Being aware of the issue is the key, I guess, harrumph. Staying home wouldn’t make me better, and I could always deep-six the review if I felt too cranky after all. So I bundled up and headed out into a chilly night with a fierce wind blowing that reminded me a lot of a Provence mistral, only colder.

Before long, I wheeled into the suburban parking lot where Brasserie Provence beckoned with cozy lights and a table full of smiling friends. I felt better already! Owner Guy Genoud, a certificable Provençal who hails from Cannes, France, has turned the tired old venue that long housed the national Tony Roma’s chain into a fresh replica of a French brasserie.

Working with him, Chef de Cuisine Edoardo Bacci (a native of Trieste in northeastern Italy, another Mediterranean port town that I love) has put up a menu that reminds me of some fondly remembered places in the South of France. It’s not a low-cost eatery (although you can get a more affordable taste for lunch), with 14 entrees ranging from $17 to $42. “Brasserie” suggests a focus on beer, and the modest list does hold some good Belgian ales and local microbrews; the wine list looked interesting, too, but I had to resist temptation. Whatever!

Nursing my cranky convalescence, I decided to assemble a string of small plates, washed down with a goblet of strong, dark iced tea ($3). It was golden-brown, a bit hazy, with a distinct smoky overtone. Probably not Lapsang Souchong, but maybe China Keemun. Damn! I’m tasting tea as if it were wine!

Soupe au Pistou ($7). “Pistou” sounds like “pesto,” and there is a reason for that: It’s the Provençal equivalent, basil, parsley, garlic and olive oil are ground into an aromatic paste. Dollop it atop a shallow plate full of a steaming potion that resembles a the offspring of French onion and Provence vegetable soup, inhale deeply, and enjoy. Who needs chicken soup?

Tarte de tomates et chévre au basilic ($11) is a warm tomato and goat cheese tart with basil. This simple dish looked wonderful! In other words, it looked like a pizza! I love pizza! No ordinary pizza, though, it was built on a base of flaky puff pastry!

Roquette ($8), French for arugula, made a cooling meal-ender, decent if a bit anticlimactic. Bitter greens and a few mandoline-sliced shavings of fresh fennel were garnished with a couple of surgically peeled orange segments, amply dressed with sweet walnut-oil vinaigrette,

Dessert? I didn’t even want chocolate. Bah! But hey now, what’s this? Mousse de fruits rouges ($8)? “Mousse of red fruits”? That sounded abstemious enough to suit my mood, but guess what! Fruit can be decadent. A vertical cylinder of feather-light mixed-berry mousse atop tiramisu on a flaky crust, topped with a tiny, almost-frozen artisanal chocolate-covered cherry. I ate it all, and was the better man for it.

In my medicated condition, decaf ($5.75) made a perverted sort of sense. Make strong, quality decaf, run it through a French press, and guess what? It’s good.

My solo dinner, without wine or cocktail, small plates and no entree, still came up to $45.32, making clear that this place is pricey (and, I think, worth it). Our charming server, Krisztin, who handled a large table with smiles and sincere hospitality, earned a $10 tip.