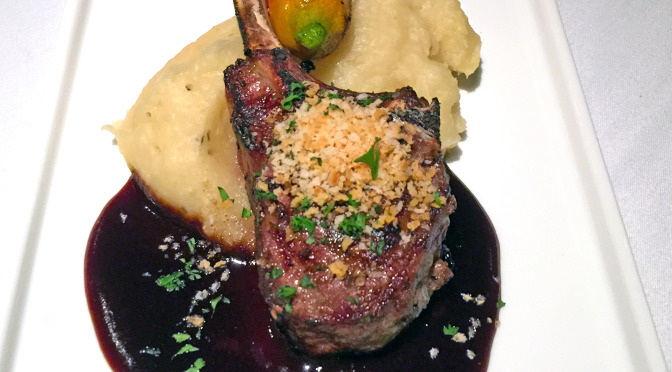 I try hard to be open-minded. I really do.

Consider the evidence: I’m a U of L grad, but I’m willing to root for UK or even IU, assuming that they aren’t playing the home team. I’m male yet feminist, straight yet affirming. And even as a card-carrying liberal, I voted for at least one Republican on last month’s ballot. Hey, it’s something!

But all this tolerance stops when we talk about the seasons.

?I hate winter. I hate winter with a deep and abiding loathing. Boo to snow! Bah to ice! Be damned to frostbite and bitter cold! If we could run the calendar straight from October to April, I would be just fine with that.

But let’s not go negative here. Let’s talk about coping with the reality that is winter. One blustery evening recently, when the temperature was dropping, the wind was shrieking, and my heavy parka wasn’t doing all that much good, we stepped in the door of Bistro 1860.

Warm welcomes, a cozy table, and a fireplace that seemed to warm the entire room quickly drove the dark winter away.

What’s more, to my delight, Chef Michael Crouch has just launched his seasonal menu for winter, a bill of fare loaded with hearty delights to stick to the ribs and warm the soul.

Crouch’s menu is billed as “French-American fusion,” but it looks pretty international to me, in a good way. Its “à trois niveaux” (three levels) format affords a choice of bite-size, appetizer or full entrée portions for many dishes. Prices range from $6 to $12 for most bites (foie gras is $17), $11-32 for apps, and $17-$47 for mains.

Mary and I and our friends Bob and Julie were all about sharing, so a smorgasbord of bites and apps spread over the table made sense for us.

I do wish that Bistro 1860 had applied the same concept to the Cruvinet wine-dispensing machine that it inherited from its predecessor, L&N Wine Bar; the option to line up 2-ounce tasting glasses of several wines for a mini-tasting was great wine-geek fun.

But a half-price Tuesday wine deal improved my attitude, offering us the opportunity to share a bottle more pricey than I would usually consider: Orin Swift D66 Grenache, a lush, lusty French red from the Pyrenees, bottled by a respected American producer, was marked down from its $90 tag to a doable $47.50. Before we got to the wine, Bob and I made short work of a Makers’ Manhattan ($8) and a Negroni, respectively, which added nicely to the warming factor.

A round of salads got us off to a healthy start. Mary went for a $12 salad special but had them hold the bunny rabbit, enjoying the fresh spinach and “spring mix” greens with a tasty caesar-style dressing and shaved Parmesan. Plated with Dijon and halved baby artichokes, it was Tres delicieux and very delicious, to put it in French-American fusion!

My pick, the baby arugula salad ($6 “bite”), was fetching, too, appropriately bitter fresh greens nicely dressed in a shiitake vinaigrette, garnished with squares of Benton’s bacon, and topped with a slice of fresh pear that had been poached in vanilla-bean-scented bourbon.

Julie is a vegetarian who hates goat cheese, which pretty much blocked her out from everything on the menu, but our gracious server took good care of her, offering to have a pork taco app ($12) re-fashioned as a meatless dish, running in spicy kimchiand marinated veggies in lieu of the pig meat on three stacked pairs of soft corn tortillas.

Bob, an obligate carnivore, looked lovingly at the steaks before heading directly for the grilled Colorado rack of lamb ($12 “bite”). It was tender and sizzling, simply accompanied with celeriac puree, carrots and a dark, rich lamb reduction. A sizable ration of brussels sprouts as a side ($6), tiny bacon-scented mini-cabbages, were prepared so well as to make converts out of the most dedicated sprouts-hater.

A “bite” of Coho salmon ($10 ) was a 3-inch oblong, wrapped in paper-thin potato slices and roasted au point. It was plated on sauteed spinach in a subtle orange-chervil cream and decorated with golden raisins and almonds. Flavorful and moist, it was salmon perfection.

Julie’s disdain for goat cheese put her off the polenta ciotola entree ($19 as an app, $36 as a main), and that was her loss but not mine. A remarkable tour de force of plant-based cuisine, it started with a creamy, rich and smooth cheesy polenta cloaked with a toothsome wild-mushroom red-wine ragout, then topped in a vertical construction with perfect tempura-style carrots and wild mushrooms and, I think, a shaved black truffle or two.

Tiny but rich pots de cremes in three flavors ($3.50) and steaming cups of rich, clean and fresh coffee wrapped up a memorable meal and an experience that ranked among our city’s best.

Our share of dinner for four would have been about $85, including the wine and a cocktail. Exceptional care from server Charlie, sharp and on task, friendly and fun but never obtrusive, earned a 25 percent tip.