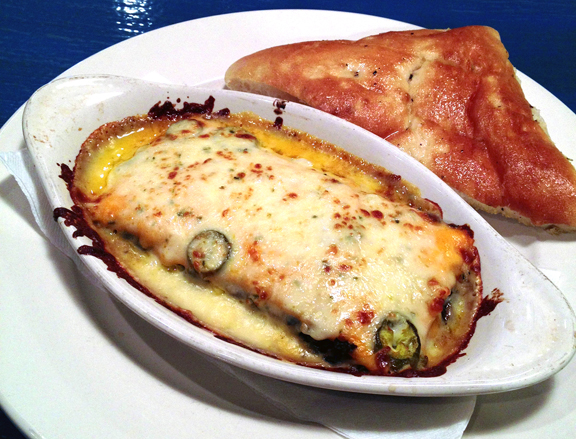 Here’s something worth knowing about Cafe Lou Lou in St. Matthews: Among all the city’s restaurants, edging out even such close contenders as Equus & Jack’s, Del Frisco’s, Charim Korean and Havana Rumba, it arguably stands closest of all to that iconic Louisville location: “Where the old Sears store used to be.”

Folks in Louisville are notorious for locating almost everything by reference to the location of the old Sears building. A quick Google search will reveal that we are far from the only city that does this; but the custom here holds a particularly enduring resonance that, to the frustration of newcomers, just won’t go away.

After all, it was big news all over town when Sears, Roebuck & Co. opened its new store in St. Matthews in 1959, replacing an older, smaller shop right next door to where the old Vogue Theater used to be. (Sorry!) The new store was sleek and modern, and it cost more than $2 million to build, a sum that would amount to an inflation-adjusted $16 million today.

Before long, though, what was new became old as the “new” Sears gave way to an even bigger, newer mega-Sears in the St. Matthews mall, and “where the old Sears used to be” became part of our vocabulary.

Happily, Cafe Lou Lou is still going strong. But, like Sears, it too got its start closer in to town, opening in an old saloon space in Clifton and quickly gaining a crowd of loyal fans for its “Lou Lou” concept that merged owner-chef Clay Wallace’s culinary voyages through Louisville and Louisiana.

Five years ago it moved to St. Matthews, to the horror of those who feared that it couldn’t possibly stay the same. But just about everything did stay the same, from the bold colors of its brightly-painted table tops and walls and its arresting art to Wallace’s eclectic menu that traverses the world from Louisville and Cajun country to Greece and Italy and beyond.

Five years later it has spun off a sibling in the Highlands, and it keeps on keeping on, drawing satisfied crowds at both locations with delicious, creative cuisine in sizable portions at attractive prices.

The extensive menu offers appetizers and salads, calzones and pasta dishes, a good selection of admirable pizzas and oversized sandwiches. Most dishes offer the choice of small or large portions, with small portions priced at $11 or less; larger sizes top out around $15. The bar offers a first-rate beer-on-tap selection and a well-chosen and affordable wine list.

We dropped in for a Saturday lunch and seriously overindulged. A luscious firm square of blue cheese polenta ($9) was topped with shiitakes, red onions, blue cheese crumbles and a spicy roasted red pepper sauce.

Black bean lasagna ($11) came sizzling in an oval bowl, wide pasta slices stuffed with black beans and cheddar under a blanket of jalapeños and molten mozzarella.

A gyros roll ($9.50) featured abundant thin-sliced gyros meat rolled up with lettuce, tomatoes, onions and a garlic-yogurt sauce rolled in an oversized lavash flatbread and toasted warm. It came with a small side of sauted veggies.

A side of Cajun waffle fries ($2.50 a la carte) were spicy hot and appetizing.

Desserts were tempting but unrealistic atop all that food. Our $35.99 tab (plus $7 tip) covered two big take-home boxes that fed us through the middle of the week.