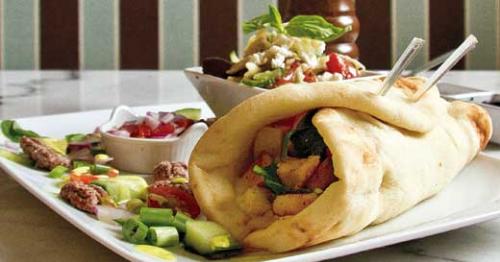 When I first heard about plans for Ghyslain on Market, I was really excited. A French (well, Québécois) chocolatier opening a bistro in a sort-of historic building on East Market. What’s not to like?

I’ve been craving a real French bistro in this town ever since Le Beaujolais closed. Le Relais can certainly satisfy a mood for French cuisine, but even with its trimmed-back-for-the-recession menu, it’s still a cut above bistro fare — not that there’s anything wrong with that.

As it turns out, Ghyslain isn’t a bad place to settle down for lunch or a light dinner. But upon closer analysis, it strikes me as more of a fancy deli with a hint of a French accent than anything that really takes my spirit back to Provence.

Watch out for the Ghyslain sign as you drive down Market: The restaurant is somewhat out of sight, its attractively renovated carriage house hidden behind the old funeral home that now houses the corporate offices of Creation Gardens.

Step in to the large, just-off-white room, and you’ll spot a series of glass-front cases that house neat arrays of fancy chocolates and samples of some of the featured dishes of the day. Line up, place your order and take a plastic number to your table, stopping off to pour your own water or fountain drink as you wait for monsieur or madame to hustle out your food.

Service is friendly and attentive, bistro-style. The cranked-up air conditioning on a brisk spring evening reminded me of Provence on a chilly winter day.

For the record, restaurateur Ghyslain Maurais is a culinary graduate of the Institut de tourisme et d’hôtellerie du québec, where he earned certification as a chocolatier and pastry chef. He and his wife, Susan, opened a wholesale chocolate shop in Union City, Ind., in 1998, followed by eateries in Richmond, Ind., east of Indianapolis, and in Zionsville, an Indy suburb. The Louisville operation is their first move out of that area in what’s likely a bid to become a chain.

The large, bright dining room is simple and attractive, with heavy white marble tables, a comfortable banquette and side chairs. Hefty pepper grinders and three-pocket salt cellars are loaded with black lava salt, gray fleur de sel and pink sea salt, a gourmet-style touch that frankly hints at something a little fancier than the appetizing but not quite so high-flying bill of fare.

Soups, salads, sandwiches and side dishes dominate the menu, with a smaller selection of entrées and sampler platters. Nine sandwiches, which come with a choice of one side, range in price from $10 to $12 and bow to French, Italian and even Scandinavian traditions. Want French? You can get a croissant (loaded with chicken salad, $10) or a baguette (with ham and Brie, $12), or even a brioche ($10, with espresso-flavored barbecued pulled pork).

Alternatively, you may summon a bagel (topped with Norwegian salmon and cream cheese, $12), or a panini (filled with chicken curry, about which more anon, $12).

It would probably be pedantic to wonder why a Francophone is offering a French Dip sandwich “with au jus,” which means, well, “with with juice” and is as redundant as “ATM machine” or “pizza pie.”

Once we got seated safely away from one of the mistral-style air vents, we enjoyed an international selection of goodies. Dine-in dishes are attractively arranged on shiny white plates.

Clam chowder ($6) was thick, a bit floury, with plenty of minced clams, distinctly scented with dried herbs. A salmon pie ($10) was a single-size pie: A pastry crust was filled with a chopped mix of canned salmon and potatoes, with a tarragon-scented béchamel served on the side.

A chicken curry panini ($12) was tasty, although mighty idiosyncratic. A mild curry more French than Indian in its inspiration was dolloped on the side of a flatbread round, making for a sandwich more like a gyro than a panini. It came with an acceptable side salad of mesclun lettuces dressed with a tart-sweet vinaigrette.

We finished up with a portion of flourless chocolate cake ($6.95). It was deeply intense and satisfying in flavor, but its tough texture left a lot to be desired, making us wish for a miniature chain saw. Either it had been heated in a microwave until tough, which would be a bad thing, or it was like that in the first place, which would be a different bad thing.

We took a selection of Ghyslain’s candies out the door for later enjoyment. They weren’t bad, although the artisan chocolate field is a competitive one in this town, and at this point I’m not sure they’re ready to compete with Coco’s Chocolate Café (1759 Bardstown Road, 454-9810, www.cocoschocolatecafe.com) or Cellar Door Chocolates (1201 Story Ave., 561-2940, www.cellardoorchocolates.com).