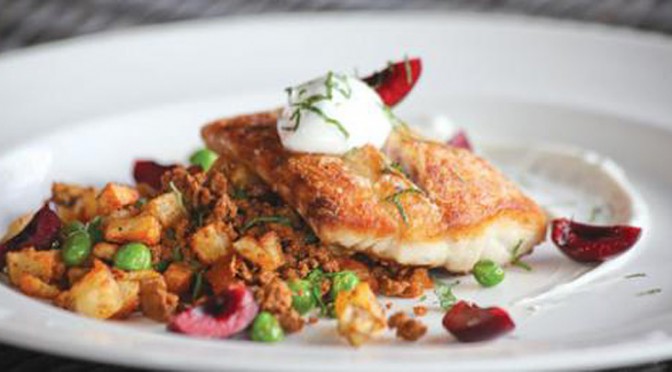 I like to think I’m a bit of a beer geek, but our friend Don puts me in the shade when it comes to knowledge of things malty and hoppy. I’ll bet he could recite the rules of the ancient Reinheitsgebot beer laws forwards and backwards, and our multilingual pal Anne could help us do it in the original German.

Naturally Anne and Don were eager to join Mary and me on a dinner excursion to The Brewery on Baxter. With a name like that, it had to be a haven for lovers of things beerish.

And it was, sort of, at least as a well-chosen sampler of eight draught taps and six bottle choices all devoted to American craft beers. (“Good picks, but it seems a little short for a place that calls itself ‘The Brewery,'” Don muttered, and I couldn’t disagree. The wine list is on the brief side, also, but the bar appears well stocked with liquor.)

So that’s the beer. But what about the food? And the mood, and all that good stuff?

Let’s say a lot of eyes have been watching this place. The local foodie blogosphere has been all atwitter as an all-star cast of Louisville restaurant-industry pros – incorporated as Louisville Eats Good – has taken over this old Baxter-strip landmark and is reworking it as a fancier, foodie-er operation. It’s something like those food-television shows where a mean chef comes in cussin’ to turn a greasy spoon into a four-star spa, only kinder and gentler and a lot less obnoxious.

The mere presence of such culinary luminaries as Chef Shawn Ward, who came over from Jack Fry’s bearing the shrimp and grits recipe he imported from the South Carolina Low Country in 1995, and local eats paterfamilias Dean Corbett, who can make everything better, has seemed sufficient to inspire paroxysms of praise.

And The Brewery is good, make no mistake about that. I’d go back in an instant, even when faced by the tough choice between freezing under humming fans and cranked-up air conditioning inside the old building or baking under sunny summer heat on the otherwise attractive deck outside.

We started outside, then retreated, sweating, within, where I noticed Mary discreetly piling on sweaters. The scene is both chilly and dark in the main dining and bar section, with black ceilings, black tablecloths on the smallish tables and dark green walls adding to the comfortable twilight mood.

Banks of big-screen televisions tuned to a variety of sports provide much of the illumination in a space that – save for the magisterial bar – reminds me more than a little of the current incarnation of Equus & Jack’s Lounge. Corbett’s hand at work? Perhaps.

Ward’s menu is not overly long, but it’s plenty appealing. Some might call it a bit un-focused, with slightly yupped-up bar fare like burgers and fish sandwiches bumping up against fancier dishes more attuned to white-tablecloth dining. I’m inclined to call that “choices,” although I doubt I would choose the $36 center-cut beef filet with sage beurre blanc at the high end of the list even if I were sharing.

Nothing else among the two-dozen items on the bill of fare comes in at more than $20, and several are exceptionally affordable at $6 to $9. It’s split into “M” for meat dishes, “S” for seafood and fish and “V” for vegetarian, a category in which several items, oddly, include anchovies, prosciutto and chicken. (The chef will gladly leave out the animal flesh upon request.)

We started right in with first-rate appetizers. Caesar salad “rolls” ($7) took an artful spin on the Caesar basics. Crisp romaine leaves were painted with a tart-sweet Caesar vinaigrette, rolled into neat cylinders and garnished with Parmigiano, white anchovies and crisp brioche croutons. Fresh asparagus stalks were cloaked in light tempura and presented as a salad ($7) in a light tomato vinaigrette with garlicky aioli and Parmigiano.

A special entree, mussels in a piquant, not fiery, Thai-style broth, was excellent. A dish of tender linguine ($11) coated in garlic-basil olive oil, topped with Parmigiano and plated on chunks of very mild poblano peppers, needed a little mixing on the plate, after which it was fine.

We weren’t so happy with a seared salmon dish ($20), though. Made from Verlasso salmon, a farmed Atlantic salmon billed as sustainably grown, it was fresh enough and flaky but rather strong, yet dominated by dessert-level fruity sweetness in its chard-curry broth and mango-cherry chutney.

Seared snapper ($20) drew more praise. It was fresh and cooked just right, plated on a skimpy mix of chorizo and potato that Anne said provided just the right strength of flavor and went well with the mint yogurt.

Our share of dinner for two came to $64.66, including a couple pints of beer and two decent desserts. Competent and caring service, as I’d expect from a Corbett’s operation, earned a $15 tip.