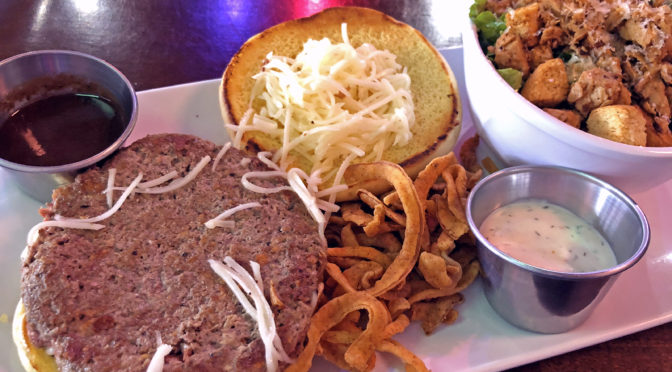 You’ve probably heard of the Impossible Burger, the heavily capitalized, much publicized meat-free burger that’s so much like the real thing that you can cook it rare and watch it bleed. It’s not animal blood, of course, but a soybean protein called leghemoglobin, “heme” for short, plant-based cousin to animal hemoglobin.

Like competitor Beyond Meat, which also boasts big-name investors, the folks at Impossible Foods aren’t just trying to serve a vegan market. They’re looking at a future world where animal agriculture isn’t sustainable, and trying to come up with something that’s sustainable, plant-based, and so deliciously like the original that people won’t even miss meatburgers.

Until recently the Impossible Burger has been available only in select restaurants in major cities, like David Chang’s hip Momofuku Nishi in New York. Now it has landed in Louisville at Stanley Chase’s Morel’s Cafe (619 Baxter Ave., 409-5916), on the menu as the Steakhouse Burger ($14 with the Impossible Burger, $12 with a Beyond Meat Beast Burger), loaded with vegan mozzarella and A1 sauce.

I can testify: That thing is freaking amazing. It’s plant-based and meat-free, but it tastes like good ground beef.  It’s the most “meaty’ meat-free burger I’ve ever eaten, right on in its flavor, texture, color, even the pink juice.

Try it. You’ll love it, and Mother Earth will, too.