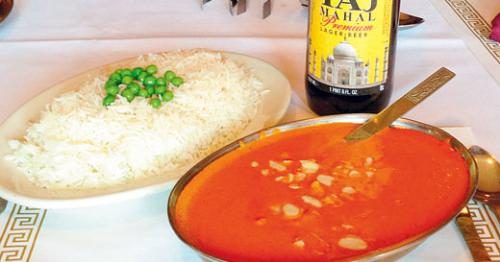 Little things mean a lot. Even something as little as a grain of rice can mean a lot. Of course, it takes 7,200 grains of rice to fill a cup, or so sayeth the Google, but that’s not important right now.

Let’s talk about rice, and in particular the spectacular rice at Taj Palace. Trust me on this, folks. I love Indian food, and I’m a fan of Taj, which has survived a journey around three East End locations. I go there fairly often. But the other night, sampling a bite of simple, extra-long-grain basmati rice from a side platter, I suddenly experienced what philosophers call an epiphany, a sudden, almost spiritual insight into the deeper meaning of things. Specifically, rice. And Taj Palace.

This is simple rice, almost plain. White, long grains, flecked with occasional bits of brown spice. Cinnamon maybe? Or clove? Its subtle yet commanding aromas didn’t speak so much of exotic spices, though, as the ethereal floral, slightly nutty character of basmati rice, and maybe just a whiff of the Indian clarified butter called ghee. Each grain was separate, yet the rice was succulent, not dry. I bit into a single grain and found it firm yet yielding. This, friends, was perfect rice, and for a moment I thought I could probably just make my meal of it.

But then I saw all the other stuff on the menu.

Taj seems to be a neighborhood eatery for the Westport Road area, mostly, and when we dined there on a Saturday night, a lot more people were lining up for takeout than filling up tables in the cool, classy dining room (which once housed Seviche’s short-lived suburban venture). Taj is generally packed at lunchtime, though, when a well-made, carefully tended Indian buffet is $8.99, and I’m as likely as not to be part of that crowd when I’m working out that way.

After our recent evening trip, I may head out there for dinner more often. The menu lists 125 items, from appetizers through breads, about 75 main dishes and desserts, and I can’t think of any I’ve tried that didn’t satisfy. Most entrees range in price from $9 to $16, topping out at $37 for the fit-for-a-mogul multi-course King Dinner for two.

What’s more, whether you’re wary that Indian food might be “too hot,” or frustrated that Indian places won’t make it hot enough, in my experience, the servers will reliably ask how you want it on a scale of one to five, and the kitchen will try to respect that. (My wife’s wimpy “1” was mild enough to make her happy, although to its credit, it remained pleasantly warm with a harmless tingle. My “4,” dialed back from “5” after I saw the server’s eyes widen, was hot enough to get my endorphins working but didn’t require a trip to the ER.)

The papads were good enough to inspire a shared appetizer, the veggie app platter ($5.99). An introduction to Indian street food on a dish, it’s a combination of a samosa, which is a pastry-wrapped turnover of piquant potatoes and other veggies the size of a giant Hershey’s Kiss; pakoras, spicy, crispy golden-brown veggie fritters; and paneer pakoras, which are pretty much the savory Indian response to Italian mozzarella sticks.

India being home to such historic spiritual practices as karma and reincarnation, there’s a lot of vegetarianism there, so it’s no coincidence that some of the world’s best meat-free fare comes from the Subcontinent. Interestingly, Indians also produce amazing meat dishes, so go figure.

We decided to try one of each, focusing on intriguing Northern Indian sauce styles that proved similar yet deliciously different.

Lamb Makhni ($13.99) consisted of inch-square cubes of tender, flavorful lamb that had been long-simmered in a dark adobe-red fresh-tomato sauce rendered “creamy” with a buttery puree of finely ground nuts to provide flavor and texture.

Malai Kofta ($10.99) gave minced-veggie dumplings a warm bath in a similar sauce, a slightly paler shade of red made with (I think) heavy cream, ground nuts and raisins. The flavors and textures of both dishes made me want to eat more than my fill — with more of that great rice, of course.

A poori ($3.99) ordered to go alongside was the only failure. The tender whole-wheat bread tasted OK, but it failed to puff up to its crisp, balloon-like ideal, and it came dripping with grease. I suspect the fryer temperature was way too low, but the kitchen should have caught that. Poori fail.

To console myself, I turned back to a simple dessert, kheer ($2.50), the traditional Indian rice pudding. Yes, rice again. This was just as good as the basmati au naturel, here cooked into a light, luscious pudding with aromatic flavors.