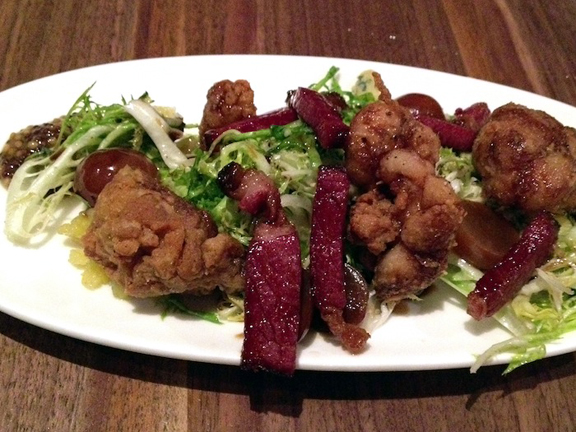 For the first month or so after it opened in February, if you wanted to check out what Chef Edward Lee and his crew were doing at MilkWood, it was easy: Just wait until the play started at Actors Theatre of Louisville upstairs. The restaurant would empty out, and you could enjoy your meal in almost solitary splendor.

This trick doesn’t work so well any more. Louisville’s dining public, rarely slow on the uptake, has discovered that the latest dining room at Actors breaks the long pattern of its predecessors, which seemed focused on basic pre-theater fare.

MilkWood fills the same space, attractively if sparely renovated, but it brings a fresh approach: Think of it as a destination restaurant that just happens to share space with Actors. We arrived just at curtain time and saw hordes heading upstairs for the play. But as they departed, a noisy, happy new throng moved in to enjoy a second dinner cycle.

“Enjoy” is the operative verb: On repeated visits, once with a group of friends, we had no complaints about food, drink or service. This is not surprising when you consider that MilkWood is the product of 610 Magnolia’s Chef Ed Lee with his sidekick Kevin Ashworth in the kitchen. Wine guru Len Stevens, formerly of L&N Wine Bar, presides in front of the house, while Stacie Stewart and mixologists build creative cocktails behind the long bar that’s centerpiece of this comfortable venue.

Stewart welcomed us on a recent visit with a “Southern Expansion” cocktail ($6), a chilled blend of Ancient Age bourbon sweetened with a touch of honey and infused with aromatic fennel. Our group also shared a just-arrived Ken Wright Oregon Pinot Noir at Steven’s suggestion. When in doubt, ask the wine guy!

Of course, we came for the food, and MilkWood holds up its end on the culinary side. Lee’s creative culinary mashup, much of it created as small plates, offers upscale takes on locavore fare blended with touches of his Korean heritage and a panoply of flavors from around the world.

In contrast with 610 Magnolia, which is justly perceived as pricey with its $50 and $60 prix fixe menus, MilkWood’s concise but diverse menu seems practically economical. Only a few of the dozen entrees, such as the rib eye ($28) or fish of the day ($25) exceed a double sawbuck; the memorable crispy-skin duck dish at $38 is intended for two to share. Eight starters – which can serve as small plates for grazing – are $7 to $10. The creative wine and drinks lists are organized according to flavors and are attractively priced.

Crispy sweetbreads ($10), an appetizer served as a main dish, were very good, dredged and fried, crisp on the outside, melt-in-your-mouth creamy within. They were garnished with pastrami and perched on grilled frisee with blue cheese and tart pickled grapes.