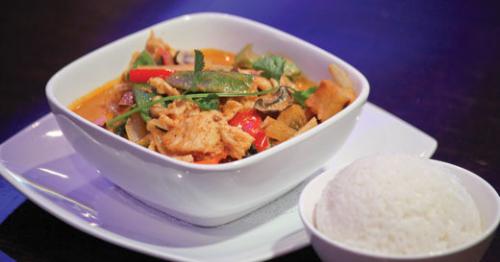 As the signature upscale shopping district in Tokyo, Ginza is a landmark akin to Rodeo Drive in Los Angeles, Miraflores in Lima or Chicago’s purportedly magnificent Michigan Avenue. Which suggests that Ginza Asian Bistro, a newish suburban eatery in Louisville, has set itself to a mighty high standard with its choice of moniker.

When you first step through the door of this flashy spot on Shelbyville Road near Hurstbourne, with its pools of translucent blue, green and red lights marking out space on the ceilings and walls, lots of mirrors and an oversize lighted fish tank, you might feel a flash of high color and high tech that could make you think, “Ginza, yeah!”

Service is Ginza-polished, too, with fluent English speakers delivering food and attending to your order with grace and style.

But in my recent experience through a substantial, multi-course midday meal, Ginza sadly stops well short of the ideal in the food department. None of eight dishes we tried ranked as outstanding, a few were “meh,” one went uneaten, and one got sent back to the kitchen for an unsuccessful re-do.

This was particularly disappointing because this spot had received positive reviews on the LouisvilleHotBytes.com forum. In retrospect, though, it seems much of Ginza’s praise goes to its high-end sushi rolls, prepared to order at the short but stylish sushi bar.

We didn’t have much luck with ordering from the menu, and the issues suggested a consistent pattern of careless kitchen work and, a major no-no in the sushi business, past-prime ingredients.

Perhaps the menu’s reach exceeds its grasp as it tries to crank out three disparate Asian cuisines — Japan, Thailand and China — and, but for the sushi, only a short, somewhat Americanized selection of each.

The Thai menu has only eight entrees, each available with tofu, chicken, beef or shrimp plus soup, salad and rice, priced from $9.95 to $16.95. The Chinese menu offers a dozen old-style Chinese-American entrees from $10.95-$12.95. Curiously, Pad Thai is listed as Chinese. Other than sushi, the Japanese bill of fare is limited to soups, salads, apps and hibachi-style dinners from $10.95-$27.95.

Wrapping it up like seaweed on sushi, you’re probably best advised to stick with sushi rolls, where you’ll find more than 60 options ranging from $3.50 to $13.95.

Do take care, though, to discreetly ensure that your selections pass the sniff test. The strong, unappetizing fishy stench of our salmon-skin roll ($4.25, or discounted as half of a two-for-$7.95 lunch order) signaled the fish was well past its sell-by date. We quietly pushed it aside and said no more about it. The asparagus roll ($4.50) was fresh but very simple: Four thin, apparently uncooked-crunchy asparagus spears rested within a bland sushi cylinder cut in rounds. Want wasabi? Add your own.

A Japanese-style dinner salad ($2 or complimentary with a meal) and an avocado salad ($4.95) were well-made with cool, fresh ingredients but lacked flavor punch. Egg drop soup (free with meal or $1.50 a la carte) was disastrous. Gluey, gelatinous room-temperature broth sported a few egg shreds, its only source of flavor. A tempura appetizer ($5.95) was fresh, sizzling and crisp, but very greasy.

Then Chinese moo goo gai pan hit bottom. On the first round, chicken bites “velveted” with cornstarch batter appeared pink and raw, gooey white breading dripping off the meat in globs. Horrified, we asked for a re-do, but the second try still looked under-done. We threw it in a box and bolted.

Our keep-on-trying-something-else approach built the midday toll up to $38.50, and there was no cause to deny our friendly and efficient server a $7.50 tip.

I’ve checked in with friends who agree: If you go to Ginza, get the sushi rolls. And then trust, but verify.