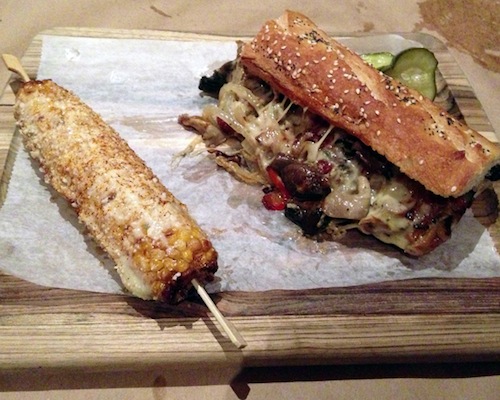 When I heard that Cristina and Fernando Martinez and his cousin, Yaniel, were going to build a bill of fare around two such disparate edibles, my imagination pushed back: “One of these things is not like the other.”

But the proof of the pudding – and the mussels and burgers, too – lies in the tasting, and the crowds that have been packing this place since January tell the tale. So, yeah, bring on your mussels and your burgers, even on the same plate.

With seven mussel dishes and 13 burgers on the expansive menu, you can build 91 combinations of the popular eatery’s signature dishes. But don’t stop there. Whatever else you order, do not fail to summon an order of the fabulous elotes.

Note, this is not “elotes en vaso,” corn kernels smooshed with mayo and Mexican queso blanco and hot sauce in a styro cup. Not that this taco-truck specialty doesn’t have its own allure, but Mussel & Burger Bar’s on-the-cob version takes it a hop, skip and a jump beyond.

One, however, cannot live by elotes alone, and the good news is that just about everything else on the menu more than passes muster, too.

On a recent visit with a group of friends, we tried mussels and a burger, among other menu items.

Mussels come from Prince Edward Island in the Canadian Maritime provinces. The mussels meunière ($9 for our app portion; $12 as a main), was a generous portion of about 15 shellfish, perfectly fresh, prepared in the classic French style: dusted in flour, sauteed with shallots in butter and finished with white wine.

Burgers range in price from $12 (for the Good Ole basic cheeseburger or a beet-based veggie burger) to $22 (for the lush “C.E.O.” with foie gras; it’s $15 sans fat goose liver). We stayed In the middle of the road with the Local Burger ($15), medium pink as ordered, a half-pound, all local construction of Sherwood Farm grass-fed beef, Kenny Mattingly’s Kentucky “gouda” and Annett’s Farm lettuce, tomatoes, onion and heirloom potatoes on the side.

The Mushroom Philly ($11) put together a batch of royal trumpet, shiitake and oyster mushrooms with molten Monterey Jack cheese, sautted onions and peppers on a slice of crusty baguette in a could-have-fooled-you plant-based alternative to the usual beef.

And then there was that elote. Corn on the cob roasted until every kernel was crisp and sweet, rolled in a thick slather of mayo, Parmesan and spicy chili powder, then roasted a little more and served on a stick. Don’t knock it if you haven’t tried it. Heaven, I tell you!

A trio of silken pistachio, Nutella and peanut butter pots de creme ($9) made a luscious dessert to share around the table.

All that dinner and a fascinating but over-sweet poblano-blueberry cocktail ($8) brought dinner for two to a very reasonable $63.60 plus 20 percent tip.