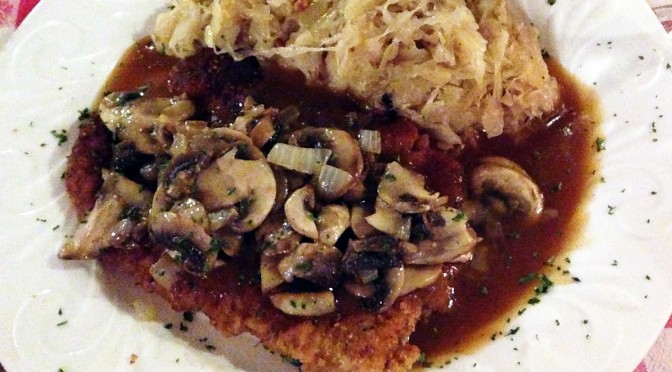 If you grew up in Louisville and have roots here more than three or four generations deep, it’s likely you have more than a few Germans perched on the branches of your family tree. Indeed, Louisville’s identity is shaped in substantial part by a German heritage that dates back to the 1840s, when a tide of German refugees from political and religious persecution came over to America in search of freedom.

Few of us speak German now; and if we do, we probably learned it in school, not at home. But when we think of comfort food, chances are that our family favorites have German roots. You don’t have to go to Germantown or Schnitzelburg to find brats and kraut or even a schnitzel, with cheap, lightweight lager beer in just about any Louisville drive-in, diner or dive – from the downscale Check’s to the trendier Eiderdown.

But real German food? The authentic stuff you might find in Bavaria or Berlin? For a city with such a German vibe, Louisville hasn’t exactly been the epicenter of Teutonic cuisine. The long-beloved Kunz’s “The Dutchman” and Hasenour’s, both now defunct, fed us Louisville-style German-American fare for decades. But I can count the authentic German spots on the fingers of one hand: Kienle’s and the Monarch Club have now gone; Erika’s recently said “Auf Wiedersehen.”

At this point, only Gasthaus remains to carry the German flag. And the Greipel family has been doing that job very well indeed since 1993. Their space in the Brownsboro Center dreamily evokes a German inn, which, in fact, is what Gasthaus (“Guest House”) means. You’ll find no white tablecloths here but bright, cozy red-checked fabric, German posters and photos, German knickknacks, tiny lights and even a semi-private table for six inside a white stone-look enclosure that resembles an Alpine chalet.

Drop in any time – they’re open for dinner Tuesdays through Saturdays – and you won’t be able to throw a kartoffel – er, a potato – without a fair chance of hitting a Greipel. Parents Michael and Annemarie and next-generation Nico, Robert, Simone, Nina and Viki, plus granddaughter Molly, make up a crowd o’ Greipels leavened by the culinary presence of Executive Chef Jason Malone.

The menu is billed as “Food like in Germany, only closer,” and the bill of fare keeps that promise, offering more than a dozen hearty German entrees (priced mostly in the $20s) focusing on poultry, beef, veal and pork, plus a solo vegetarian entree – Gemüse Spätzle ($17), traditional German noodles artfully encircled by healthy veggies.

I’m getting ahead of myself, though. Our abundant repast started with a complimentary basket full of pale-brown baguette slices, crisp-crusted with a subtle scent of rye or whole wheat, accompanied by rich, pleasantly tangy whipped butter.

Then came the potato pancakes! I didn’t see these delicacies on the menu, but a friend advised us to ask for them. They’re $7 for a pair, and Ach, du Lieber, they are good. So good. Next time I may order a dozen and make them my meal. They come with sour cream and applesauce, but these babies are so good that I prefer them au naturel. Saucer-size rounds are formed from coarsely grated potatoes and onions, fried until the interiors are creamy and steamy, within a seductive cloak of dark-golden, shattering-crisp deep-fried deliciousness.

The salad of the day ($9) featured thin-sliced English cucumbers, sliced onions and cherry tomatoes bathed in sour cream with fresh dill. It was a perfect summer salad, plated on crisp Belgian endive.

Jäger Schnitzel ($21.50) was another German delight. Recalling that Louisville-German comfort food heritage, they could probably sell it as “chicken-fried pork cutlet drowned in gravy with onions and mushrooms.” This is no greasy diner dish, though, but perfectly prepared high-class fine dining. The pork was flavorful and grease-free, the gravy meaty and scented with peppercorns. The fresh mushrooms were sliced paper thin, yet not overcooked. A side dish of sauerkraut tasted homemade, tender and beautifully flavored with a porky back note.

The menu boasts, “All desserts are served with whipped cream!” Or, as those dessert-loving Germans and Austrians put it, “mit Schlag” – in mountainous dollops. They’re all $8, plus half a buck if you want it à la mode. If it’s a true German experience you want, insist on the Schwarzwälder Kirsch Torte, the original chocolate black forest cake with cherries and Kirschwasser cherry brandy. Or an apple or cherry strudel, classic in its style and as artful in its plating as a work of art by Hans Holbein, say, or Albrecht Dürer.

With strong, dark coffee ($3) and a couple oversize bottles of Ayinger German wheat beer (a great accompaniment with food, $7.50 each for half-liter bottles served in pint glasses), our tab for two hit $97.52. Because we were with a group, a precise 20 percent tip was added on. Frankly, with caring, Old World service from Mom and Nina Greipel, I would probably have gone for more than that if they hadn’t tacked it on.