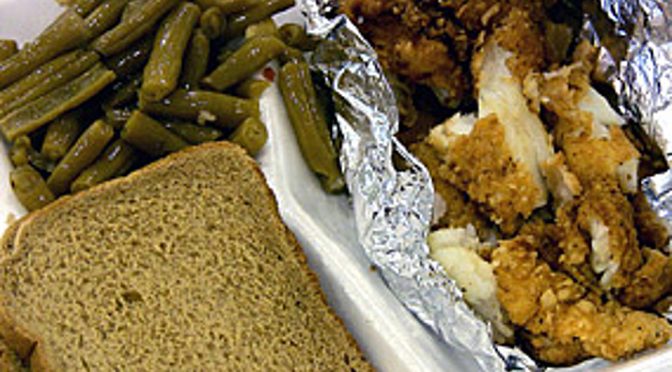 Easter is late this year, and working backwards, that means that Mardi Gras and Ash Wednesday are a little behind schedule, too. Fat Tuesday is coming up on March 1, and Ash Wednesday, beginning the penitential season of Lent, arrives next week, on March 2.

In other words, if you’ve been craving fried fish a little more than usual lately, there may be a reason for that: In a more typical year, Lenten fish-fry season would already be well under way.

Lent, of course, is the 40-day-long liturgical season leading up to Easter, during which time many people undertake modest symbolic sacrifices such as eating fish rather than meat on Fridays.

Lenten sacrifices are widely seen as a Catholic tradition, based on centuries when fasting practices including abstinence from meat was not just a suggestion but a requirement. But even after the Reformation, several mainline Protestant churches – Episcopalians, Lutherans, and Methodists in particular – continue observing Lent. including the option of taking on some form of abstinence as a spiritual practice.

Of course, in Louisville we don’t wait until Lent to enjoy seafood and fish. Fried cod, scrod, and other mild white fish on rye bread or a bun is a local tradition that goes back to the 19th century, and it’s just about as typically Louisville as the Hot Brown, benedictine, or modjeskas. Go north and you’ll have a hard time finding fried fish in a sandwich. Head south, and your sandwich bears catfish.

Historians trace this local affection to a predominantly Catholic wave of immigration during much of the 1800s, a wave of migrants dominated by Germans but also filled with plenty of Irish and smaller Italian and Lebanese Catholic streams. They were required to eat fish on Fridays by church tradition, and local bars and restaurants quickly sprang up to serve them.

Fed by speedy L&N express trains rushing seafood and fish from the Gulf in refrigerator cars full of ice, this inland town became a fish-loving city despite our distance from salt water. And if the fish got here just a bit past prime , frying it crisp and slathering it with tartar sauce or spicy cocktail sauce may have been more palatable than serving it delicately au naturel.

Of course, crunchy, sizzling, crunchy golden-brown fried fish is delicious and hardly penitential, and the same goes twice over for fancy fish dinners and seafood. Fish is healthful, too, high in protein and relatively low in calories. Even fatty fish like tuna and salmon are rich in the omega-3 fatty acids that – like red wine – seem to be beneficial to heart health.

So as time went by and the 20th century moved toward the 21st, fish on Fridays seemed less penitential than ever, and church rules gradually relaxed. But fish is popular all year ‘round, even when you’re not required to eat it. Many Roman Catholic churches offer community fried fish dinners on Fridays during Lent, beginning Friday, March 4 this year and continuing through the Friday before Holy Week, April 8.

For the last couple of years, the pandemic has forced some changes in practice. Some churches called off their fish fries for the duration, and others went to takeout or curbside service only. Only about one-fourth of the Archdiocese of Louisville’s 100-plus parishes had Lenten fish fries last year; but that’s still a lot of crispy fried fish down the hatch.

This year the number is up to 33 throughout the Archdiocese, which includes the western half of Kentucky, and 25 in Metro Louisville. Here’s a quick look at Catholic parish fish fries in the metro for 2022. For complete details, and to catch any late additions, check the archdiocesan website’s fish-fries listing at https://www.archlou.org/wp-content/uploads/2022/02/Fish-Fries-1.pdf.

Finally, if you just can’t wait for Lent, Louisville is awash with fried-fish eateries. Here are a few of my favorites (listed alphabetically) just to get you started. Think I missed one? Yell me up on Twitter @RobinGarr.