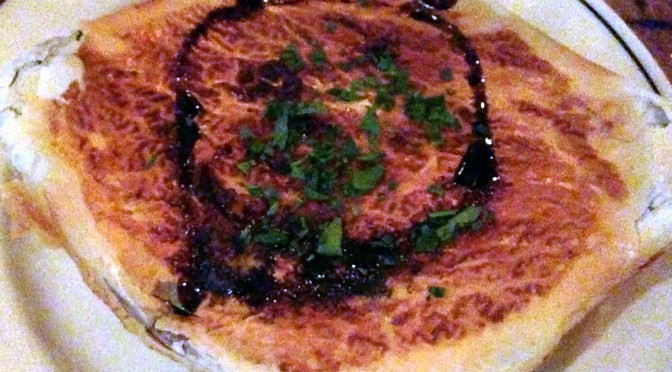 You don’t need to know nearly as much French as you used to do in order to enjoy dinner without assistance at La Coop. Well, you don’t need a French dictionary much, anyway, once you translate the moniker “Bistro à Vins” to discover that it means something like “unpretentious eatery and wines.”

The oversize menu with its small print in long columns still looks a lot like a French bistro menu, though – and I like that – but “starters,” “salads,” “soups” and main courses fall under their English names now. When La Coop opened two years ago, most of those terms were offered in unapologetic French. But it’s easier now, especially for those of us who aren’t real clear about the word “Entrée” meaning not “Main Course” but “Appetizer” in French. (“Entrée,” “Entry,” can you hear it?)

There are still a few French words that it might pay you to know: “Escargots,” for example, might surprise you unless you know that they are snails – out of the shell, bathed in delicious garlic. “Frites,” on the other hand, are French (or Freedom) fries, and they are delicious, fried in exotic and succulent duck fat.

La Coop is still just as French as French can be in just about every particular, from its very Parisian look and style to chef Bobby Benjamin’s “traditional French bistro cuisine with a slight Southern twist” and sommelier Aaron Wilson’s all-French and very well-chosen wine list. The beer list is mostly French and Belgian, while liquor offerings are international.

The menu is varied enough to offer plenty of choice, without being so extensive as to be bewildering. About a dozen starters and salads are $5 to $12; nine main courses (don’t call them entrées here) are $15 to $28. Watch for daily specials like Wednesday’s chicken and waffles, Thursday’s burgers, Friday’s fish and Saturday’s New Orleans barbecued shrimp.

An amuse-bouche got our evening off to a stellar start. Mild goat cheese rolled in tangy-sour red sorrel leaves whetted the appetite; feather-light tempura squash blossoms kicked it into the stratosphere.

Cassoulet ($18) was built according to the Southwestern French standard, a stew of pork and duck and white beans, and a hunk of duck-leg confit was fine, dark and luscious. But I’ll give it only a B-minus overall, as only a tiny bit of pork belly could be found in a rather thin soup with less-than-tender beans. It gave the impression of having been constructed quickly rather than simmered for hours.

Vegetable pot pie ($15) was an earthy mix of mushrooms and roasted veggies in eggplant puree, topped with deliciously flaky phyllo. It was a good concept but flavor-light; a deft hand with herbs and even a bit of salt and pepper might have brought it to the finish line,

Steak Frites ($26) were fine, flavorful hanger steak, not over-cooked, sliced thin across the grain, served with a well-made Béarnaise and a sizable portion of thin-cut, savory duck-fat fries.

Dinner for two (including half of a shared bottle of Pierre Usseglio et Fils “Panorama” Vin de France) came to $65.72, plus a $15 tip for attentive, competent service.