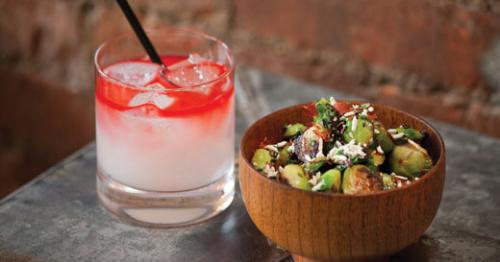 Somewhere out there in this wonderfully diverse world, there is bound to be at least one human who truly loves, loves, loves brussels sprouts.

I have not yet met this person. Let’s face it, a brussels sprout is nothing but a tiny cabbage, with all of the faults that its bigger sibling is heir to, but – in my opinion, at least, and apparently that of many others – few of the virtues. Overcook them and they get stenchy. Undercook them and they stay hard, without the saving grace of crunch. And no matter what you do with them, it seems, they remain, well, tiny cabbages.

But the other night I met a brussels sprout – a bowl of them, actually – that swept me off my feet. And therein lies the resounding point of this review: Give Executive Chef Tyler Morris and Head Chef Joe Banet and their kitchen crew at Rye anything to cook – yes, anything, even a brussels sprout – and they can make it amazing and delicious.

I submit in evidence Rye’s Korean roasted brussels sprouts. An $8 side dish, it’s not even one of the small plates or main eats that make up the core of Rye’s concise, frequently changing menu. But perhaps it ought to be. The other night four of us passed around a dish, greedily watching each other to make sure no one nabbed more than a fair share, munching and sighing with uniform delight.

What made them so freaking good? It’s hard to put a finger on it, but for starters, they weren’t chewy. The chef’s decision to slice them into relatively thin rounds for quick cooking surely helped with that. So did roasting said slices, which contributed sweet caramelization to the flavor mix without shifting the sprouts from green to olive drab. Add elusive piquant and tangy spice and top it off with rice grains magically puffed into chewy flavor nuggets. Yeah, I said it. Best brussels sprouts ever.

And that wasn’t all. From luscious, well-made cocktails to seductive desserts, I can’t think of a thing we had that missed the mark.

First, though, let’s get the down side on the table: This is a hip, popular NuLu joint. You know what that means!

1. It’s loud as the banging boiler factory of hell. You really have to focus to carry on a conversation with your partner. More than once I thought about resorting to texting.

2. It’s dark as a cave. Large hanging spheres look like full moons dangling overhead, but they don’t cast nearly as much light. It’s hard for these old eyes to squint out menu details, or see what exactly is on my plate.

Guess what! I don’t care! At the risk of repetition, the food is amazing. So are the cocktails. Loud and dark don’t bother me! Bring on a classic Negroni ($9) or a not-so-classic but delicious scarlet-topped Absinthe Old Fashioned ($12) and leave me alone with the menu, and I’ll be a happy boy.

That menu is brief, limited to four or five small plates ($10 to $14) and as many mains ($18 to $28), plus a short list of bar snacks/starters, meat or cheese plates and fresh oysters; it’s largely locavore and changes often, taking advantage of seasonal produce.

Dinner started with tender, warm yeasty dinner rolls that really are just like Mom used to make. We quickly moved on to a first-rate app, a fritto misto-style bowl of crispy tempura-fried veggies with tangy chili-lime aioli ($8).

Even when they’re combining unexpected ingredients in a dish, these canny chefs know their flavors: everything sings harmony, nothing goes to war.

Scottish salmon ($25) was fresh, robust in flavor, crisp crust surrounding a flaky, buttery interior. It was plated with perfectly cooked baby bok choy and an intriguing flavor and appearance mix of Israeli couscous and black-eyed peas.

Red wine-braised beef ($26) was succulent. It would have fallen off the bone if there had been a bone. The wine sauce was subtle, not overpowering, and the accompanying yellow grits, chanterelle mushrooms, huckleberry jus and crispy, aromatic fried sage leaves all passed muster, although the sage – likely grown in Rye’s back-yard herb garden – was very mild, perhaps a legacy of recent drenching rain.

Winter squash agnolotti ($18) was amazing, the kind of rich, complex yet balanced veggie-based dish in which meat would have just been overkill. Tender cheese-stuffed agnolotti – you could call them mini-ravioli – were cloaked in an umami-rich clear sauce flavored with matsutake mushrooms, caramelized onion, subtle red curry and lemon, topped with flat-leaf Italian parsley leaves and a shake of poppy seeds.

?With two cocktails each, a shared app and dessert, a memorable dinner for two came up to $103.88 plus 20 percent tip. We could have knocked the price back a little if we hadn’t gone for the extra drink, but why in the heck would we have done that?